A professor in the department of journalism at the University of Wisconsin Oshkosh has earned a prestigious national award for newspaper advising. 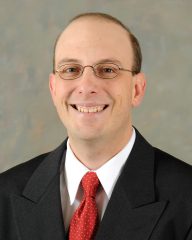 Vincent Filak has won the College Media Association’s Distinguished Newspaper Adviser of the Year at a four-year college or university, for his work as adviser of the Advance-Titan student newspaper.

Filak is the only adviser from Wisconsin of the 11 national award-winners for 2016. It is believed the award marks the first time someone from UW Oshkosh has been honored by the College Media Association (CMA).

Recipients will be honored at an awards ceremony and reception Oct. 27 at the CMA’s National College Media Convention in Atlanta, Ga.

“I’m just really happy I got it,” Filak said. “It really means a lot having your peers say you’re valued and you matter.”

Filak won a Distinguished Adviser award, which is presented to professionals who have advised for more than five years.

Filak said the award is particularly sweet, considering where he and the A-T program have been over the past year. There were questions raised in 2015 about long-standing A-T debt and budget concerns. Filak said the revenue model was not sustainable with the debt. It wasn’t long before Filak and the A-T staff were surprised with a generous gift: an anonymous donation of $50,000 in the form of a matching grant. In less than 100 days, $54,000 was raised solving the debt issues for the A-T.

Filak has been an adviser of student newspapers for 14 years. He’s in his eighth year advising at UW Oshkosh.

“The kids really do put out a good paper,” he said. “We won a Wisconsin Newspaper Association first place for general excellence in 2011 and 2012.”

Filak said it’s tough to win back-to-back general excellence awards–especially when they are up against student papers at institutions including Marquette University, UW-Eau Claire and UW-Whitewater.

The A-T is published 12-14 times a year. The first issue of the 2016-2017 school year is set for Sept. 15. Each year, the A-T staff puts out a glossy, 50-page, how-to resource guide for freshman and prospective students called the Titan Guide. It is billed as a guide to help students avoid stress in their first week at UW Oshkosh.

About 30-40 students typically are part of the A-T staff. Filak said he’s not a “censorship guy” and lets students make the decisions on difficult issues. He said students are responsive and tend to make “excellent choices” when they have the ability to do so.

This year, thanks to a financial donor, members of the newspaper staff will meet with and learn from journalism professionals when they travel to the American Collegiate Press conference in Washington, D.C..

As a journalism professor Filak performs a lot of research; is writing his fifth book; speaks annually at conferences for student writers; and has lined up nearly 50 summer internships that his students can apply for. In 2015, he was named first Wisconsin College Media Association president.

Filak does not know if his teaching schedule will allow him to travel to Atlanta to personally accept the CMA distinguished adviser award.

For now, he is savoring the honor and looks forward to holding a plaque bearing his name.

“I’m thrilled I won this thing,” he said. “Somebody looked at me in a good way and I’m really happy.”