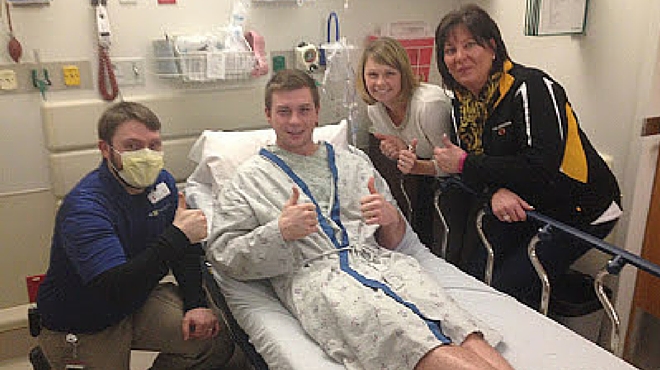 University of Wisconsin Oshkosh student-athlete Brett Kasper has not yet met the young girl whose life he saved.

That’s about to change come November.

Kasper—along with the entire UW Oshkosh Titans football team—will welcome 10-year-old Phoenix Bridegroom, of Indiana, and her family to Oshkosh for the weekend of a lifetime Nov. 4-5.

Kasper, a junior studying supply chain management from Two Rivers, Wis., became unknowingly connected with the Bridegroom family last February. He donated his bone marrow to a stranger—who happened to be Phoenix—through the Be The Match organization, which is a national nonprofit organization operated by the National Marrow Donor Program that manages the largest and most diverse marrow registry in the world.

“Be the Match is the life-saving organization that is responsible for saving Phoenix,” Tammy Bridegroom said. “They search across the entire world to help people find their perfect match, which amazes me—and saved our daughter.”

Be The Match is dedicated to “helping every patient get the life-saving transplant they need.” The organization provides research, innovative technologies, and patient support and education. 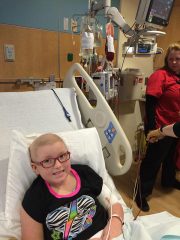 Phoenix was diagnosed with acute lymphoblastic leukemia on Oct. 24, 2011 at the young age of 5 years old. She fought the hard fight (chemotherapy and cranial radiation)—until she relapsed in October 2014 and required a bone marrow transplant to save her life.

On Jan. 6, 2015, Phoenix’s mom, Tammy Bridegroom, writes on her blog: “Phoenix needs a bone marrow transplant. Research believes that there was at least one cancer cell remaining in her body after all the medicine and chemo and radiation to her brain, and once she was finished with the course, that cell (or cells) reproduced rapidly taking over her bone marrow and blood once again.”

Kasper became involved with Be the Match when Pat Cerroni, head coach of the UW Oshkosh Titans football team, rallied the young men to get on the Be the Match registry—something deeply important to him, as young men in Kasper’s age group are the ideal donors, according to Be The Match. More than 80 percent of the UW Oshkosh Titans football team are now on the registry.

“Very quickly, it became clear that with this, I could save a life,” Kasper said last spring after learning he was a successful match.

By April of 2015, Kasper knew his bone marrow had found its way to a donor. Shortly after, the Bridegrooms became eligible to connect with Phoenix’s donor—a decision that wasn’t all easy.

“(They) would send me some papers to sign and then I would be able to reach out and communicate with the person who saved my child’s life. I would be able to see the person’s face…and say thank you…and celebrate this milestone…if and when I signed these papers,” Bridegroom wrote on her blog. 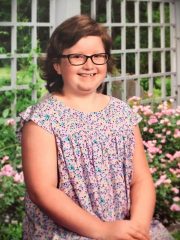 Phoenix after her marrow donation.

After some time and contemplation: “How could I not share her freckles and smile and hilarious sense of humor?! I thought of his smile when he might see hers…and then I knew how much I wanted to say thank you. So I signed the papers…and wrote the most important thank you note ever written, to our hero, who turns out to be a guy named Brett. I am SO glad I did.”

“We are coming to Oshkosh to give thanks to the people who made Phoenix’s transplant possible,” Tammy Bridegroom said. “We want to thank the Kasper family for supporting Brett’s decision to be our donor and for taking care of him during and after his procedure, to thank Coach Cerroni for being so dedicated to putting donors on the registry with Be The Match, to thank The Titans for being amazing supporters before they ever knew who Phoenix was—and of course to thank Brett Kasper for choosing to be our donor and our hero. It is our hope that we can try to express our gratitude, in person, for the miracle they had a part in.”

Because of Kasper’s selfless donation, Phoenix remains in remission and continues to grow stronger every day, Tammy Bridegroom said. She is a thriving fourth grader at Brummitt Elementary School in her hometown in Indiana—and she is living her dream of being a “regular kid” who gets to go to school every day.

With the help of the Oshkosh Convention and Visitors Bureau, the Bridegrooms will visit Oshkosh Nov. 4 and 5—to meet the Kasper family and to attend the Saturday, Nov. 5, Titans football game against UW-La Crosse. Kickoff is at 2 p.m. at J. J. Keller Field at Titan Stadium; Phoenix and Be the Match will be featured at halftime.

“Meeting Phoenix is going to be one of those moments that I’ll remember for the rest of my life,” Kasper said. “It’s going to be very special. Since the day I donated I’ve said that being able to meet the person would bring this story full circle—and here I am having that chance. It’s going to be an emotional day, that’s for sure.”

A Be The Match registration event will be held from 1:30 until 4:30 p.m. on Nov. 5 at Titan Stadium. Anyone 18-44 years of age is encouraged to register by filling out paperwork and completing a mouth cheek swab.

“Working with Brett throughout this entire process has been completely amazing,” said Kelli VanderWielen, Be The Match recruitment specialist. “His compassion, strength and commitment as a donor has inspired hundreds of other UW Oshkosh athletes, students and community members to join the registry and support our mission of saving lives.”

The Be The Match organization is hopeful the on-site event will attract a comparable number—more than 200 registered—to the last UW Oshkosh swab drive. To join the registry, visit https://join.bethematch.org/titanmatch.

Also at the football game, Team Phoenix t-shirts will be for sale with proceeds benefiting Be The Match.