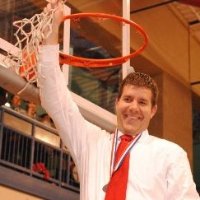 For 10 years, Springer has served as the head varsity girls basketball coach as well as a health and physical education teacher at Providence Day School in Charlotte, North Carolina. Over the past 13 years, Providence Day has won 105 conference games straight and the 3A state championship of North Carolina independent schools for eight years in a row.

Over the years, some of the players from the Providence Day girls basketball team have become McDonald’s All-Americans and Gatorade N.C. players of the year.

Springer graduated from UWO with a  physical education major and a coaching and health education minor.

“I wanted to go to an outstanding school in terms of their health and physical education and coaching fields,” Springer said. “UW Oshkosh had an outstanding reputation for that. I knew once I visited, it would provide the foundation for me as one of the best educational schools in the Midwest.”

Springer’s passion to coach basketball began at the age of 15. Throughout his years at UWO, he worked hard to make his dream of becoming a high school or college basketball coach come true by taking many classes and going to coaching clinics.

“I graduated in four years from a five-year program (education) and averaged 22 credits a semester for four years straight,” Springer said. “I took 8 a.m. class every single day for four years because going to class earlier in the morning allowed me to be able to coach in the afternoons.”

He often scheduled as many classes as possible in the morning and then either drive up to Menasha to UW-Fox Valley to coach with his dad in the afternoons and evenings. In later years, good friend, Riley Woldt, offered Springer the opportunity to be a freshman coach and assistant varsity coach. Woldt is currently an assistant women’s basketball coach at St. Norbert College.

A special part of Springer’s college experience was getting to share it with his dad, Joe Springer. Joe graduated in 2003 as a double major in psychology and physical education.

“I went to UW Oshkosh sharing my entire college career as an undergrad with my dad,” Springer said. “It was unique that we went to the same school, at the same time.”

Springer said the best years of his life were spent at UWO.

“I feel ridiculously blessed and humbled to have made so many personal and professional relationships,” Springer said. “I had a great family experience with my dad as a part of my college experience, along with outstanding mentors. I also developed great friendships with a lot of the people in my major all as a result of the UW Oshkosh environment.”