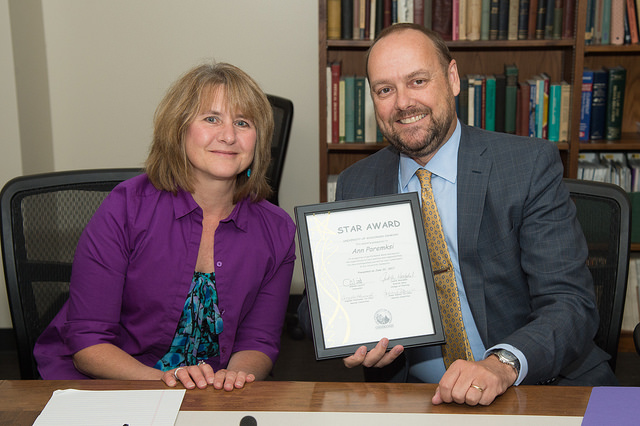 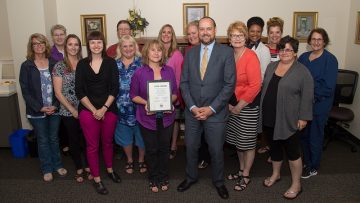 Ann Paremski, who works for the College of Nursing as University Services Associate, at the University of Wisconsin Oshkosh, has been named the recipient of the July 2017 STAR Award.

She was nominated by Brenda Garza, budget and policy analyst for the College of Nursing.

“Ann Paremski has ‘stepped up to the plate’ in the College of Nursing so many times this year that she should be considered an entire team of 1. In January, when the College of Nursing was moving into our new building and our dean’s assistant transferred to a new position, it was Ann who stepped up and made sure all details of getting the College of Nursing administration’s physical items into their new area. She hunted through rooms to make sure our items were packed and moved. She met with movers and facilities management staff to make sure items were put where they should be. She came before hours and stayed after hours to make sure our administration suite was under control. She also picked up doing some moving organization for the other areas of the CON, too. If anyone had a question about physical items, they went to Ann first.

“In May, when a program assistant, who does the College of Nursing scholarships, needed to be out of the office for an extended time, it was Ann who came to the scholarship rescue and made sure the information was correct and added into the new system. She also did all the paperwork for the disbursements. In early July, when our Living Healthy Community Clinic (LHCC) was under duress to get data ready for a report, it was Ann AGAIN who came to the rescue to spend hours and hours entering data.

“In August, she worked with a programmer to get information into the LHCC system. She did a lot of organization for the annual College of Nursing retreat, was a huge developer of the new construction grand opening in Clow, and is also heavily involved with the CON 50th anniversary and the CON Nightingale Awards Ceremony. Ann is now assisting our new associate dean with even more on her plate. I can’t say enough wonderful things about all she does above and beyond her regular duties. If anyone deserves a STAR Award it is Ann. She is more than deserving.”