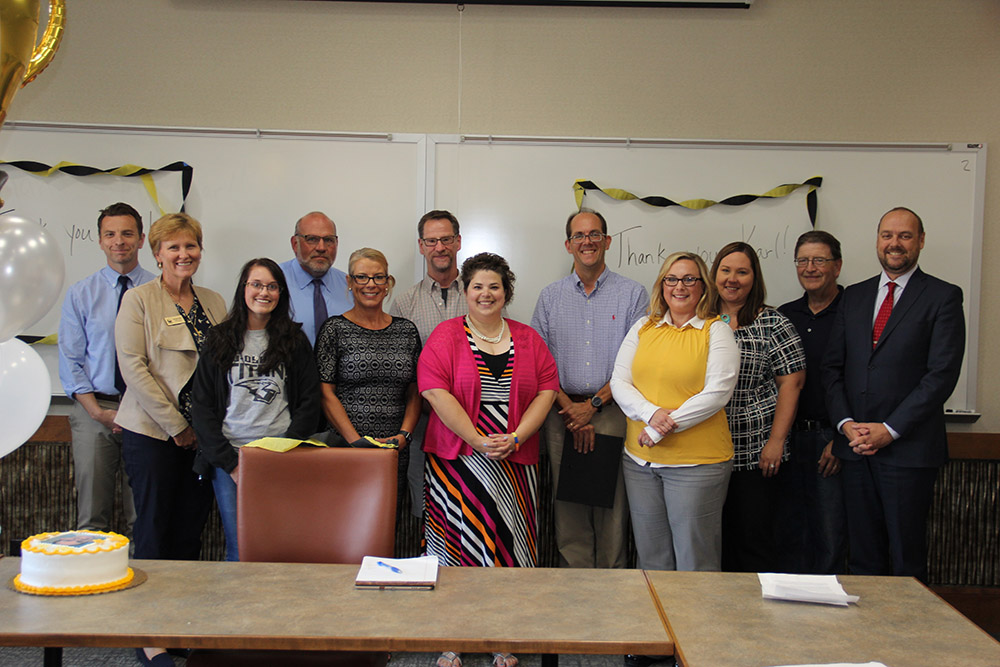 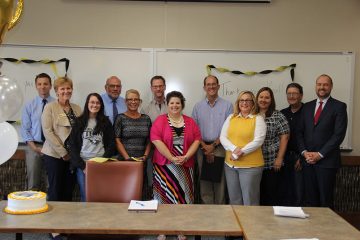 Karl Loewenstein, past faculty senate president and history professor, has been selected as the recipient of an award that celebrates the character, passion and commitment of non-classified faculty or staff member who has supported the advancement of UW Oshkosh University staff.

Loewenstein was nominated for the recognition by Lisa Goetsch and Marci Hoffman, both past presidents of the University Staff Senate.

“For the entire two years that Karl Loewenstein served as the Faculty Senate President, he supported and informally mentored both Lisa Goetsch and Marci Hoffman as they served presidencies on the University Staff Senate. 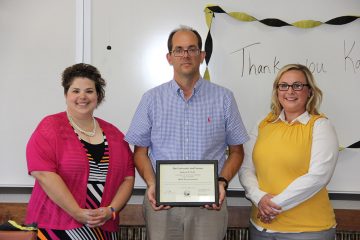 “While Karl was serving as the Faculty Senate President-elect, an Oshkosh Student Association member formed an ad hoc committee of governance group leaders meant to engage one another in shared topics. Due to the success of this committee, Karl initiated a resolution to continue monthly meetings throughout his two-year presidency. These meetings have been instrumental in creating an environment that allows everyone an opportunity to speak, be heard, and feel welcomed. Karl set a precedent that everyone’s voice matters. It also established relationships, so that members of each governance group had direct contact to our fellow governance leaders. Our mutual respect for one another created a dynamic where we purposely notified each other of major events, often before notifying anyone else.

“The University Staff Senate is the newest governance group on campus and within UW System, and Lisa was the very first President after we became officially recognized. It is virtually unheard of for University Staff employees to be included in governance, but UW System is attempting to lead the way. It’s difficult to determine how we fit into this ancient system so many centuries after faculty governance began; especially considering the nature of our employment compared to that of the more traditional governance groups. As pioneers of this new academia, we had our fair share of confusion, conflicts, and misunderstandings. Luckily, we also had Karl who has been a great listener, insightful, and patient colleague. He allowed us to be raw and honest without judgement. Vulnerability without fear of being reprimanded is very rare for our category of employee.

“A particularly interesting (albeit stressful) situation we’ve endured is the policy process. Ever since being allowed to participate in policy creation and approval, University Staff have struggled with the process. We asked Karl the same questions a million times over, and he ALWAYS had the patience to help us. He would take extra time to go into further detail to help us wrap our heads around it, which only encouraged further questions. This opened a door to him being our real-life UW Oshkosh governance and politics Google search engine. Drives to and from Madison each month were spent by us selfishly using that time to dig into Karl’s brain for our Senate’s benefit. And he was always fully engaged, listened, and willing to share.

“Sometimes it’s difficult to see the whole story or historical background of a situation, policy, or practice. Karl would frequently share the background of everything to give us a full perspective. He was also curious of our perspective to build his own understanding of campus wide issues. While we usually agreed on these issues, his inclusive nature would encourage us to really listen to anyone who might not agree. Considering the opposite side of any situation, without confrontation, is important. These critical viewpoints and thoughts allowed us to offer an educated and well-informed discussion with our Senate on the topics at hand.

“They say actions speak louder than words and Karl showed us this many times. The University Staff person on committees is often looked at to be the one to take notes, make phone calls, or do traditional ‘secretarial’ duties as opposed to engaging in discussion. Not with Karl. Nothing was beneath him. He would never ask you to do something that he wasn’t first willing to do himself. This may seem insignificant to Karl, but we are used to being the ones to make the car rental reservations, because that’s the ‘woman’s job’ or the ‘secretary’s job.’ For Karl to make those types of arrangements showed how much of an equal team player we were to him.

“We both agree that Karl is inclusive on multiple levels. He never made us feel like we were less educated, less important, or less experienced because of our employee classification. There are too many places on campus where University Staff are made to feel inferior to those in other employee groups. Karl never once made us feel that way. Being women, and more importantly younger women, in leadership roles can be daunting at times. Karl’s patience and professionalism was always incredible. During Lisa’s presidency, there were times we would think University Staff concerns/situations only impacted our employee category. Maybe it was something small that we didn’t want to ‘bother’ him with, but Karl would be quick to say that if it affected us, it affected everyone. During Marci’s presidency, he would support us when we raised our concerns to the campus leadership, because if it was important to University Staff, it was important to everyone. For both of us, he would take the time to understand our point of view so that he could help us articulate it to others.

“The most interesting piece of Karl’s support is that the two of us (Lisa and Marci) have very different personalities and leadership styles. We also had two very different experiences and challenges as President. Yet we both felt strongly that Karl was a major contributor to our successes, and that he needed to be recognized. We and the University Staff Senate will forever be grateful.”