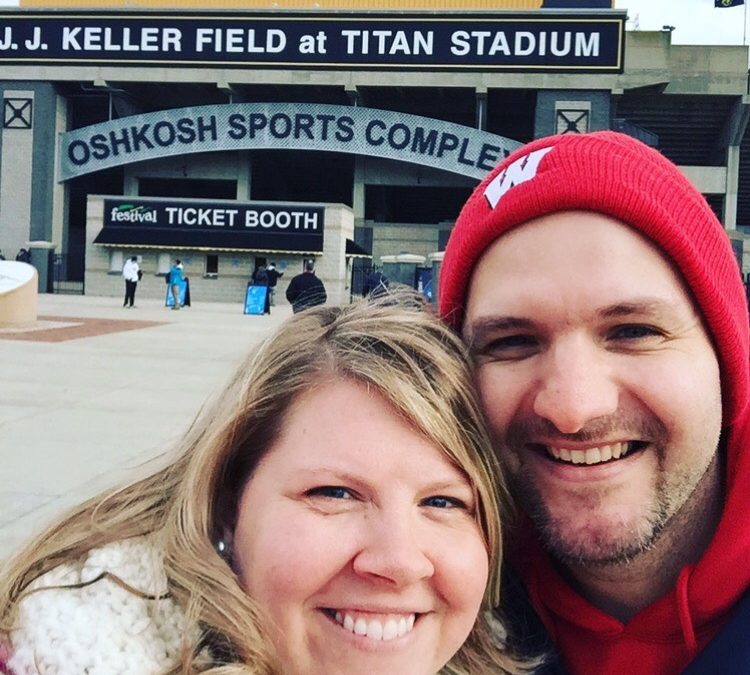 At Homecoming each fall, alumni often take a moment to reminisce about all the connections they made through their residence hall experiences. 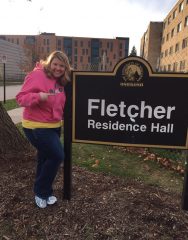 That will surely be the case this October for 2006 University of Wisconsin Oshkosh grads Kevin Damask, a journalist with Capital Newspapers in Portage, and Jennifer Rabas, a substance abuse prevention specialist with UW-Madison’s University Health Services.

Fletcher Hall brought the couple together … even though they never lived in the residence hall at the same time. Damask lived in Fletcher from spring 2001 to spring 2002, while Rabas moved there in fall 2002.

“We just missed each other,” she said.

Fast forward to 2015 when the couple met online.

“When we found out we both attended UWO around the same time—that was definitely a connection,” Damask said. “Then to find out we only missed living in Fletcher by one semester was pretty crazy.” 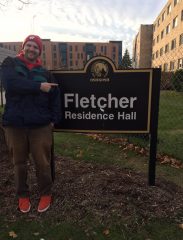 They also quickly figured out they had other UWO experiences in common. For example, they both were in the media booth during Homecoming 2005 and never knew it. She was there as part of the Reeve Union Board’s special events committee, and he was the sports editor for the Advance-Titan.

Damask remembers best the lifelong friendships he forged at Fletcher.

“I enrolled midway through the 2000-2001 academic year and moved in on Super Bowl Sunday,” he said. “I was the new kid on the first floor and didn’t know a soul, but all the guys welcomed me with open arms, and I really appreciated that. What’s really great about attending a university is students have the opportunity to meet kids from all walks of life.”

Those friendships proved invaluable to Damask in the aftermath of the terrorists attack on the World Trade Center on Sept. 11, 2001.

“I remember walking to the bathroom to shower and get ready for classes and noticed a lot of guys had their TVs on and tuned to the news. I thought that was strange since ESPN, Comedy Central and MTV were about the only channels we watched,” he said. “When I came back from my shower, my buddy told me some planes had crashed into the Twin Towers.”

Damask was floored by the news.

“Living in Fletcher among fellow students provided a sense of comfort during a time of chaos and uncertainly in our country.”

In her role as Fletcher Hall secretary during her sophomore year, Rabas made some of her most favorite memories with the hall government team.

“We went to leadership camp, helped everyone move in, had the best late-night grilled cheese fundraisers, spent a ton of time doing the minutes in the hall government office and just really had a great bond.”

When Rabas hit a bit of a rough patch trying to manage school and extracurricular activities, she turned to her assistant hall director Chrissy Lambie, who continues to serve UWO today as the marketing manager and College of Nursing/ACCEL career adviser with Career Services.

“She helped push me and checked in with me regularly to make sure I was doing well,” Rabas explained. “I actually decided I wanted to go into student affairs that year and began talking with people who could help me get connected to things like the Oshkosh Placement Exchange and the Future Leaders of Student Affairs group.” 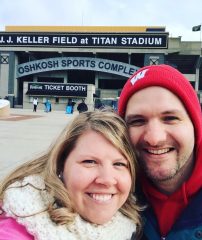 “Our connection to UWO and more importantly to Fletcher Hall was what led us to finally meet in person, and the rest is history,” Rabas said. “We went to a few football playoff games last fall and had the best time, so we are planning to come back this year for Homecoming.”

Damask is especially excited to see that the Titan football program has risen to national prominence.

“Watching them compete for a national championship last season was such a pride boost for alumni throughout the country,” he said.

Damask and Rabas both were impressed with recent changes on campus.

“I was blown away by how different campus looks,” Damask said. “It’s really nice to see the University invest in new projects to make sure the campus looks appealing. I think when a campus looks great, it promotes learning and students want to go to class, work hard and earn their degrees.” 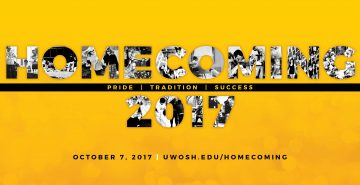 The couple plans to be back on campus for Homecoming 2017 on Oct. 7.

Then from Reeve, tours will depart every 15 minutes between 9 and 11 a.m. for Fletcher Hall, where visitors can see the lobby, computer lab, an example of a new student room, a variety of new lounge spaces and recreational facilities.

“I can’t wait to see how Fletcher looks after the renovation. While I know it won’t look the same as it did when I attended UWO, It’s great to know current and future students will have the benefit of enjoying all the perks,” Damask said.

Following Homecoming weekend at UW Oshkosh, a grand opening celebration will be held at Fletcher Hall, along with Reeve Memorial Union. The celebratory event, which includes ribbon cuttings at each renovated building, will take place at 3 p.m. Monday, Oct. 9 at the Horizon Village Amphitheater outside of Reeve Union.

Campus and community members are welcome to take tours of both new student-centered spaces.