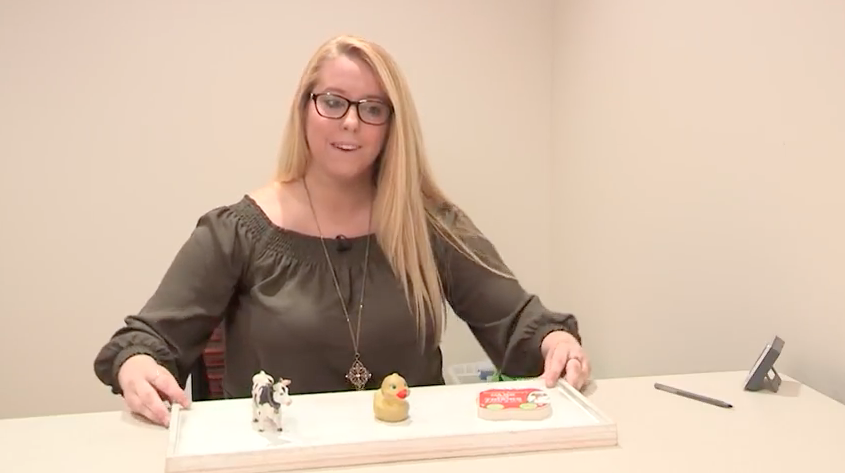 University of Wisconsin Oshkosh senior Blair Braun, of Appleton, is studying why some children have more difficulty in learning language than others.

“We know that children from lower socioeconomic statuses are more susceptible to language delays compared to their middle class and higher class counterparts,” Braun said.

The psychology major wants to take a more specific look at which tasks are challenging the children.

“I’m looking at how (children) initially learn a word, remember that word and then are able to generalize it later,” she said.

To gain information, Braun and her faculty mentor Sarah Kucker, a UWO assistant psychology professor, bring children aged 17 to 37 months into a lab and test them on their ability to link specific words to specific objects.

Braun begins by presenting a research participant with three items that they will likely recognize — for example, a book, a duck and a cow—and determines whether the participant can link the object’s name with the object. Then she introduces a novel object—for example an orange and pink toy that Braun calls a ‘fode’—and tests the child’s ability to learn the name of that new object.

Braun will compare the results of children from different socioeconomic backgrounds to specify differences in how the children are thinking about language.

Braun said she fell in love with psychology at UW Oshkosh.

“The faculty that I work with in the psychology department have been the biggest supporters that I’ve had. They give me confidence when I lack confidence,” Braun said. “Having that guidance from the faculty here and being able to work with them one-on-one is something that Oshkosh has that’s very unique compared to other universities.”