Anyone passing by Appleton Trophy and Engraving would be hard-pressed to miss the large colorful mural designed by University of Wisconsin Oshkosh fine arts graduate Irineo “Esai” Medina ’15, and painted by more than 20 at-risk teens.

The mural culminated more than 18 months of planning by Medina and fellow UW Oshkosh alum, Kayla (Weaver) McNamara, ’08, human services, who serves as director of targeted support services for the Boys ans Girls Clubs of the Fox Valley.

The mural depicts a pair of locked hands, each a different skin color.

Medina, 26, said the mural was done to promote a positive message and “shift the culture we live in.”

The mural was a component of the three-week curriculum for Summer of Service—a community service campaign at three agencies designed to engage Appleton School District teens who may have attendance issues or credit deficiencies. Those who graduate from the Summer of Service program are awarded a half credit on their transcript, according to McNamara.

“Irineo and I worked for a year to do this—for them (Summer of Service youth) to have a full experience and be transformative through an experience with art,” she said.

Once considered at-risk himself, Medina said he started making better decisions in life after becoming a young father several years ago. He recently was married to a fellow UW Oshkosh art graduate. 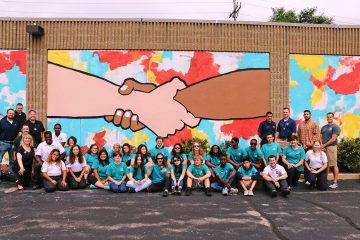 McNamara said Medina served as an example for the group and shared his story of hardship. He explained how art helped him through some difficult times.

The teen painters were excited about the project and developed a sense of pride in having a part in the prominent public art.

“Overall, I think the (mural) message is beautiful and overall it was warmly received,” Medina said. “It had a really good response throughout the community and has hopefully opened some doors for the future,” Medina said, noting he’s had a meeting to discuss another painting project.

Part of the landscape

Sue Van Rooy, a partner in Appleton Trophy and Engraving with Jay Parish, said it took a little time to get used to seeing a large bright mural along the side of the building she’s been coming to for 31 years on Appleton’s north side. Now, it’s just part of the landscape.

“The millennials love it,” she said of the artwork that developed from a community project.

Parish said he’s been a big advocate of public art and space was available on the side of the Appleton Trophy building—a business that has been a staple in Appleton for the past 61 years. 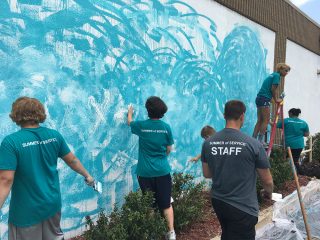 “I really like it,” Parish said, adding that they are creating a metal plate to explain the mural. “I like how it stands for unity.”

“I figured we’ll do it first and maybe others will do it too,” he said.

Medina, an Appleton resident who graduated from UW Oshkosh in 2015, works on art when he’s not at his job at a local call center. His goal is to redefine the landscape of the Appleton area with public art—specifically murals—as his passion.

He feels strongly about mentoring and including at-risk youth in his endeavors, noting he can relate to their situations. 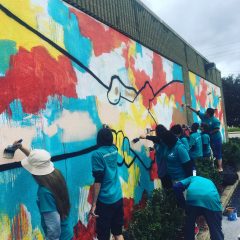 “The group we’re working with needs positive examples of what is possible (after high school),” McNamara said. “They need positive ways to deal with emotions, and art is a way to release that anger or that tension.”

The mayor of Appleton congratulates the students who take part in a special ceremony as they graduate from the Summer of Service program.

“We are celebrating all of our kids—not just those getting all “A”s on their report cards,” McNamara said. “Everybody has something to contribute. Overall we see really great results.”