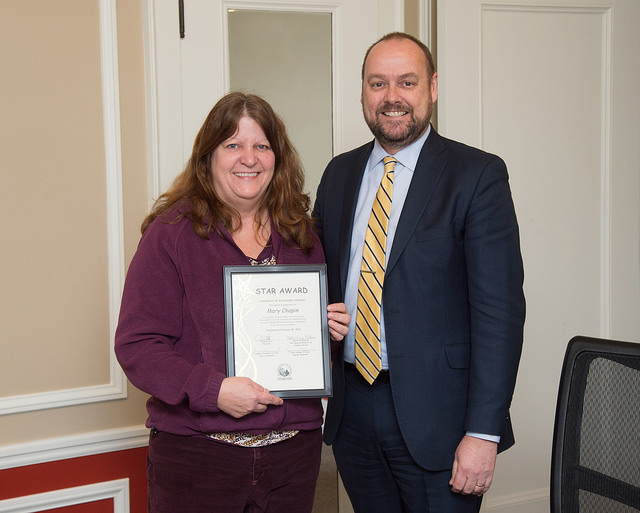 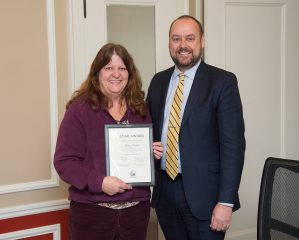 Mary Chapin, who works for the University Studies Program as the USP course scheduling and financial specialist at the University of Wisconsin Oshkosh, has been named the recipient of the March 2018 STAR Award.

She was nominated by Debbie Gray Patton, USP associate director for student success.

“Mary has been an invaluable asset the last few months. In the month of March, I had a family emergency that caused be to be out of the office for an entire week on two separate occasions. Both times occurred at critical work times. The first occurred during the time peer mentor applicants were submitting applications. She kept track of everything physically turned into the office as well as took care of the many applications I forwarded from my email to her. It was such a relief to come back to everything organized so I could follow-up as I needed.

“The second time occurred during the hiring process for peer mentors. Mary made sure everything was in place to give me the best information possible. She went above and beyond by addressing any concerns and following up on individual questions. She’s always an amazing work partner, but this time it was done while I was out of the office, spending every day in the hospital. The comfort her presence and follow-up gave me cannot be accurately described. She would not typically be asked to follow-up on my correspondence in the peer mentor selection process. Her ‘suppor'” in hiring and following up with peer mentors has typically related to getting them on payroll. With 60-plus peers mentors, that is a big job.

“Finally, Mary has been faced with her own family emergencies. Through it all, she always has a smile and a great sense of humor. Most recently we were under a time crunch to update materials for print that were needed for orientation. These documents require an intense attention to detail. I know she will always work well under pressure, providing correct information. In the case of our documents for orientation, it would be something that we typically work on together and would be in her job. However, there were MANY last minute changes that had to be proofed. Mary had looked over and had these documents ready long before they were needed. When the changes were made, they were outside of her control, thus, in my opinion, really being above and beyond. The timeline was short and several documents had to be changed in multiple places. Copies were shared with all our incoming first year students.

“As a part-time employee who also does not work on Fridays, she has fairly scheduled time constraints. In these situations, she had to adapt and go above and beyond. I feel very lucky to get to work with her. She makes my days easier and happier!”