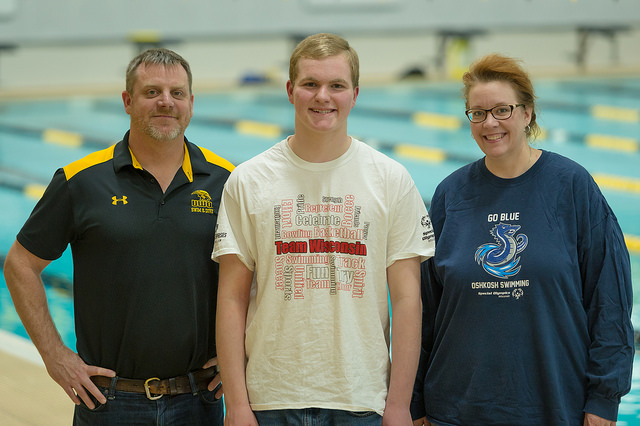 A local teenager who has been training with the University of Wisconsin Oshkosh swimming and diving team over the past five years will represent Oshkosh and Wisconsin when he competes in the Special Olympics USA Games July 1-6 in Seattle, Washington.

Jarod Falk, 17, is a student at Oshkosh North High School and lettered this year on the varsity swim team. He started swimming with Special Olympics and its Team Blue swim team in 2013—training each week in two sessions at Albee Pool on the UWO campus and two sessions at the downtown YMCA.

“Jarod is a fantastic athlete,” said his coach Debbie Hoff. “He gives 110 percent at every practice. He tries really hard to learn techniques to improve his strokes and times.”

Christopher Culp, head men’s and women’s swimming and diving coach at UW Oshkosh, said the team works every spring with the Oshkosh Special Olympics Swimming Team. About a dozen current UWO team members act as coaches and life guards and work with Team Blue to improve their swimming strokes and racing.

“It is very rewarding and a great relationship,” Culp said.

Jarod will travel in July with 54 other athletes from Team Wisconsin to the Special Olympics USA Games, where more than 4,000 athletes from all 50 states will be represented. He will swim the 100 Free, 100 Back, 200 Free and the 400 Free Relay.

“UWO really does have a huge role in Jarod’s story,” Hoff said. “It is where he started competitive swimming, has trained for six years and the pool he considers home.”

Before starting his training with Team Blue in 2013, the only swimming Jarod had done was adaptive lessons that teach water skills and safety for individuals with special needs. He completed those adaptive lessons at age 8. 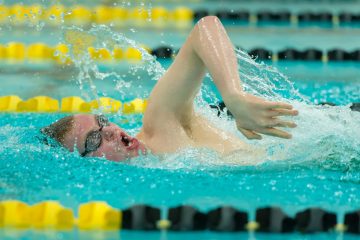 Hoff, a former competitive swimmer who has been coaching for 13 years, was inspired to work with Special Olympics because she has a cousin with an intellectual disability. She said UW Oshkosh has been very gracious with their support of her Special Olympics swim team.

“All the coaches like working with him,” she said. “He is very humble and focused.”

Jarod’s parents, Chris and Wendy Falk, are  supportive and come to all his practices in their familiar spots in the bleachers. They are looking forward to watching their son compete in Seattle. “This really is once in a lifetime,” Wendy Falk said. “There’s no way I would miss it.”

“I’m very excited,” he said about plans for the trip to Seattle that combines competition with a much-anticipated, cross-country adventure with his family.

The Falks have a large contingent of relatives and friends—the group will total around 20 people—joining them on the trip that stretches from June 30 to July 7. The group includes Jarod’s parents and two younger sisters.

Wendy Falk said her son’s success as a swimmer wouldn’t have been possible without the Special Olympics Team Blue program and the assistance of UW Oshkosh and its swimming and diving team.

“They are treated like athletes—they are athletes—and that is something we respect,” she said. 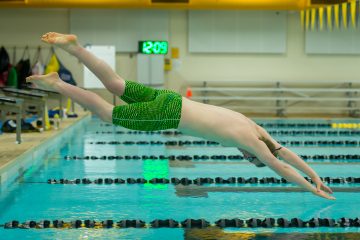 Jarod swims about 2,000 yards each practice for Team Blue. His high school swim workouts can be about double the distance, according to his mom. Hoff and the UWO swimmers have been helping him focus on technique and delivering the most efficient swimming strokes he can.

Jarod said he “was born” with a strong work ethic.

“He doesn’t miss a beat,” Hoff said. “He comes into this (Team Blue) season at the top of his game.”

Jarod has his “temps”—his temporary driver’s license—and drove to Albee Pool for a recent practice. Like other upper-class high school students, he’s been on a couple college visits and thinking about future plans. One of the visits was to UW Oshkosh, alma matter of both of his parents. 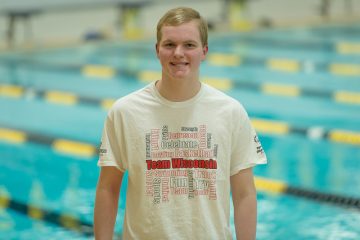 Jarod competed at Special Olympics Wisconsin state summer games in June 2017 at Stevens Point. His gold medal in the 100 backstroke earned him an invitation to Team Wisconsin Selection Camp as a swimmer. He was one of four male swimmers selected by random draw to join Team Wisconsin swimming.

He learned he would be heading to Seattle when a school resource officer delivered a sealed envelope to his school for all to watch as he opened. The moment was captured in a YouTube video.

For all his accomplishments, Jarod was recognized at the WIAC Championships in February at Schroeder Aquatic Center in Milwaukee.