UWO students showcase work at Research in the Rotunda 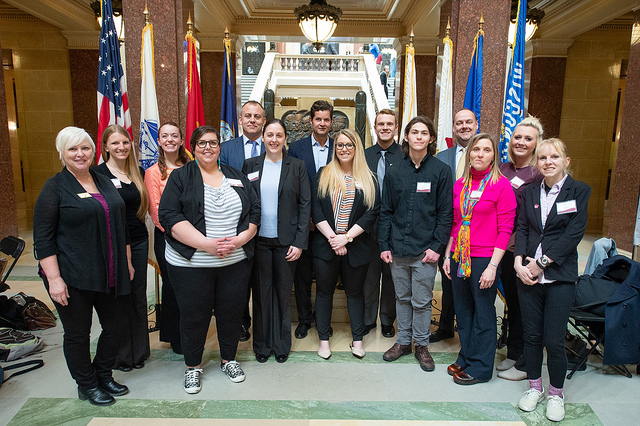 The rotunda of the Wisconsin State Capitol was brimming Wednesday with college students eager to show off their research to university officials and legislators—and explain how that research can make an impact.

More than 100 student researchers from four- and two-year University of Wisconsin campuses took part in the 15th annual event—including eight from UW Oshkosh.

UW Oshkosh biology professor Sabrina Mueller-Spitz, who was on hand with student research author Samantha Nixon, a senior majoring in chemistry, and co-author Konrad Fondrie, a senior biology major, said the event at the Capitol provides a great opportunity for her students to talk about the research process and “explain the science.”

Nixon, a senior from Wadsworth, Illinois, whose research involved a biodigester facility, said she is deciding between a few chemical production assistant job offers or whether to begin graduate school for pharmaceutical sciences.

Sheena Gilbert, a UWO senior criminal justice student, said her research and data collection on gender bias helped her decide to continue working toward a doctorate. She will be packing up and heading west to Boise State University following commencement next month. 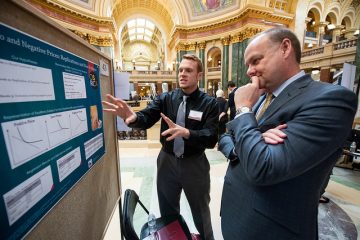 UWO senior Christopher Smith said he believes he was accepted into grad school because of his experimental economics project that analyzed consumer buying behavior. Smith is considering a career as a college professor.

Ray Cross, president of UW System, and Elizabeth Ambos, executive officer of the Council of Undergraduate Research, spoke about the impact of research extending beyond the classroom and campuses as students investigate real-life issues.

Alan Yeung, head of U.S. strategic initiatives for FoxConn, recalled his days as an undergraduate chemical engineering student during the 1980s at UW-Madison. 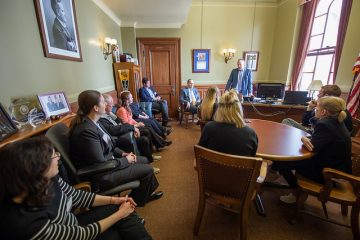 “You all represent the UW System talent pipeline that we need to tap into,” he told the young researchers.

UW Oshkosh students capped their day at the Capitol with a visit to the office of state Rep. Gordon Hintz, D-Oshkosh, of the 54th Assembly District.