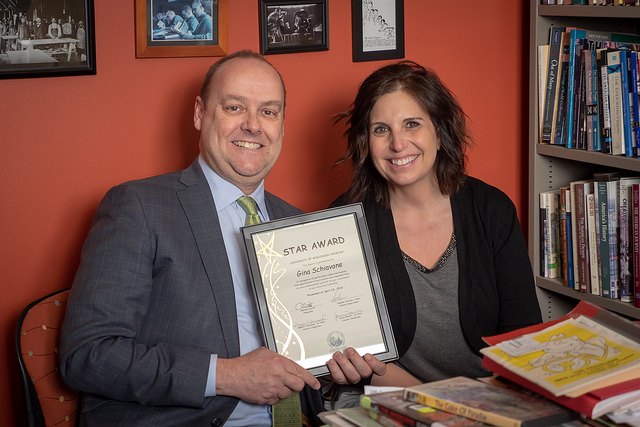 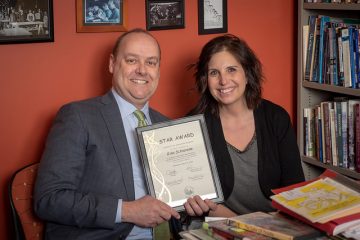 Gina Schiavone, who works for the history department as an academic department associate at the University of Wisconsin Oshkosh, has been named the recipient of the May 2018 STAR Award.

She was nominated by Stephen Kercher, history department chair:

“I hired Gina after our previous academic department associate (ADA) suddenly resigned in order to pursue a better-paying job opportunity elsewhere. The resignation came at a very bad time of the year—the end of the fall semester—so we were very eager to hire Gina as a qualified LTE replacement.

“Gina was already employed full-time at the Division of Lifelong Learning and Community Engagement, so she took a chance by agreeing to accept the LTE position in the history department (I explained to her at the time we would be hiring a full-time replacement in the future and that I could not guarantee that she would be the one hired).

“From the moment Gina was hired, she has proven a remarkable asset to our department. As her supervisor, I am constantly impressed by her ability to complete tasks in a timely and professional manner. She is extremely competent and conscientious. She conducts herself in a very professional manner. If she ever makes a mistake, she owns up to it. I have such a great working relationship with her that I cannot ever recall an awkward moment or a moment of tension between us. She has earned my complete trust, and I am grateful to consider her a collaborator. For an ADA to establish that level of trust with a supervisor, I would suggest, is something worth noting.

“As Gina has grown into her role, she has increasingly felt comfortable initiating projects that work to the benefit of the department and its students. Gina’s knack for initiating projects, then, is the first example of how she has ‘gone above and beyond (her) normal job responsibilities.’ Mostt recently, Gina shared with me thoughts about how the history department might better communicate the benefits of studying history via social media. She related how she had observed other history departments on large campuses producing short videos, with students and faculty describing the type of amazing learning opportunities that students receive when they study and research history. Gina gently suggested that I consider replacing the video that we have played at Preview Days for the past 15 years with a video that UMC produces. I am beginning a collaboration with UMC later this week that will ultimately help the history hepartment realize Gina’s vision. It’s a great idea, and I’m thankful that Gina is the type of person who cares enough about the success of her department that she’d make this recommendation.

“Gina is deserving of special recognition because she genuinely cares about the welfare of the department, the people who work there, and the students it serves. I have worked at UWO for 17 years and have had the privilege of working with a number of good ADAs. From my observation, very few of them have evinced such a true commitment to the well-being of their work environment. On a daily basis Gina goes ‘above and beyond (her) normal job responsibilities’ by ensuring smooth and cheerful interaction with faculty, staff and students. Handling the habits and eccentricities of the faculty and instructional academic staff who teach for the history department is no easy feat. Though Gina has good reason to be a little frustrated with missed deadlines, lapsed communication and myriad other problems that pop up on a weekly basis, she never appears ruffled. I hear nothing but good things about Gina from my history department colleagues.

“Gina’s skill with working and interacting with others extends to other staff at UWO. I have witnessed Gina collaborate with other ADA in Sage Hall on the various projects. Most recently, she reached out to the ADAs from political science and journalism in order to help orchestrate a jointly-run Academic Open House even in February.

“Finally, I think Gina deserves recognition for the genuine concern she demonstrates for the welfare of students. The mother of a college student herself, Gina empathizes with the challenges and struggles students face. If a student comes to the history department and needs special attention, Gina will provide it. And Gina is very good at hiring and managing the several student employees employed by the history department.

“Gina Schiavone is a special employee. We are grateful to have her work for us in the history department, and I think we do a good job of demonstrating our appreciation. But we feel that a STAR AWARD would help Gina understand just how much her trustworthiness, her conscientiousness, her initiative and her skill interacting with diverse groups of people are valued.”