Commitment to being a student-athlete brings with it numerous sacrifices.

For the members of the University of Wisconsin Oshkosh baseball team, not only does it include playing all but four games away from their home field this season, but for two members of the team, it also includes missing out on a monumental moment of the college experience.

As their peers will be participating in commencement ceremonies at Kolf Sports Center Saturday, graduating Titan seniors Noah Polcyn and Logan Reckert will be nearly 185 miles away closing out a four-game series with Illinois Institute of Technology. 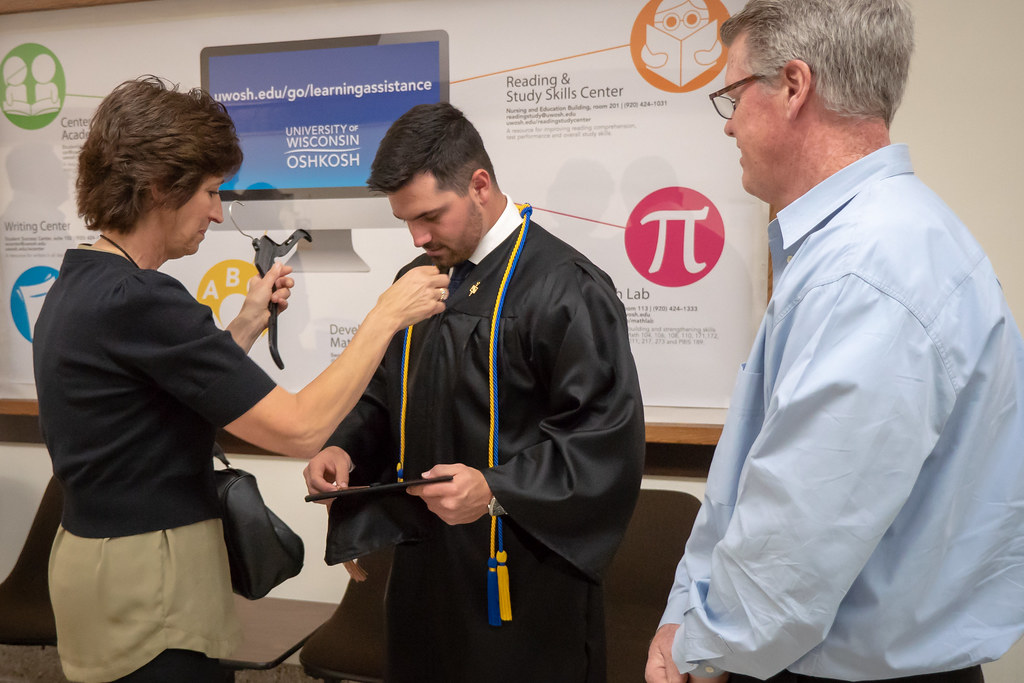 Understanding the sacrifice both Polcyn and Reckert were making to be with their team for their final push toward their first NCAA Division III Championship bid since 2008, UWO leadership put together a special occasion for both—a personal commencement ceremony right in Chancellor Andrew Leavitt’s office Thursday afternoon.

“Commencement is such an important moment in their lives—and we certainly do not want our student-athletes to miss it!” Leavitt said

“This is so great because it gives athletes the opportunity to participate in commencement when otherwise we would not be able to. It’s really special that we could do this prior to departing for our next game,” said Reckert, a finance major from Mundelein, Ill.

Making it even more special was having both sets of their parents in attendance, who watched as their sons beamed with pride as they proceeded through the chancellor’s office.

“This was really personal, getting to do this today. It’s pretty cool we got to meet with the Chancellor of UW Oshkosh—more than just shaking his hand as we crossed the stage,” said Polcyn, a marketing major from Green Lake.