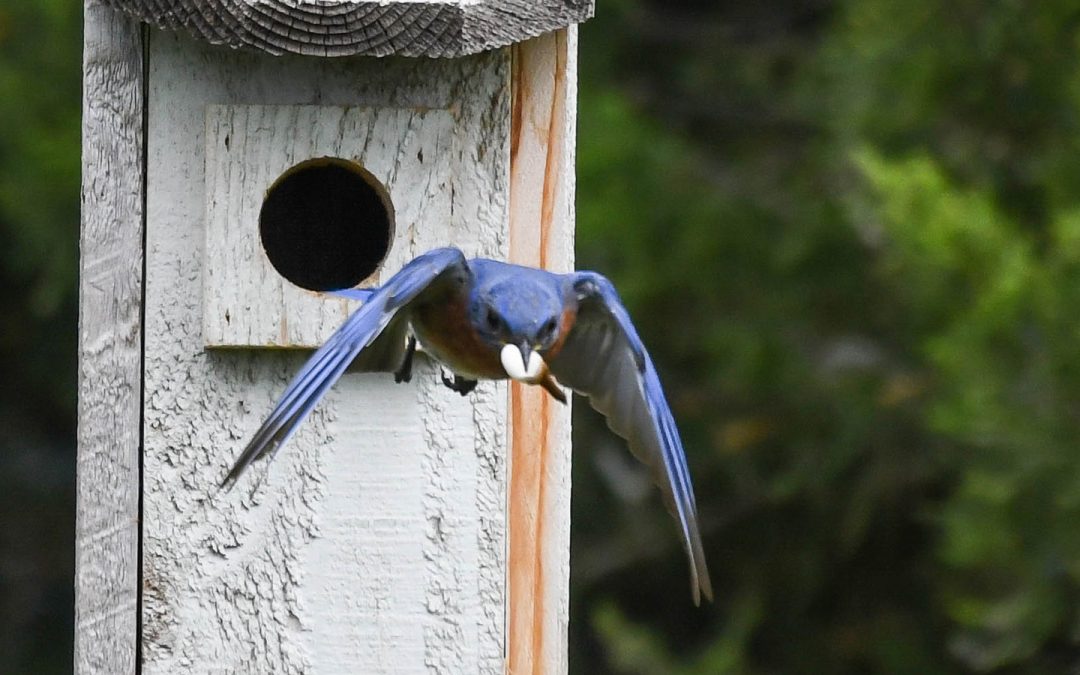 Titans are getting up-close and personal with nature!

Beyond all the trees and beautiful plantings around campus, the University of Wisconsin Oshkosh grounds staff is working to create great habitat for butterflies, birds and other creatures.

A pair of Eastern Bluebirds—beloved songbirds considered the symbol of happiness—has taken residence on campus, thanks to efforts that encourage nesting along the Fox River, behind Sage Hall. 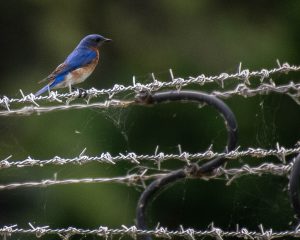 The nest was discovered by a birding group, “The Flock,” that was started by Brad Spanbauer, UW Oshkosh associate biology lecturer and campus sustainability coordinator.

“The addition of native plantings on  campus surely has increased the food supply for native birds,” said Memuna Khan, associate professor of biology at Ripon College who studies Eastern Bluebirds with her students.

Khan was on hand recently at UW Oshkosh to visit the nest box site and conduct banding of the young birds. Four nestlings estimated by Khan to be about 10 days old, received colorful identifying bands.

Eastern Bluebirds hunt insects by perching on a wire or exposed tree branch and visually searching for prey. They prefer habitat with areas of mowed grass, believed to increase their success rate in finding insects. 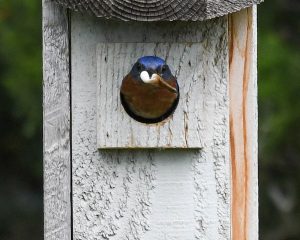 Besides the Eastern Bluebird, nesting boxes were installed for wren and wood duck on UW Oshkosh property.

Lisa Mick, grounds supervisor for the University, said there are plans to install more nesting houses in fall for purple martins, bluebirds and screech owls.

Spanbauer said he started the UW Oshkosh birding group due to his interest in ornithology and the interest of others on campus and in the community.

He said the group was surprised to find the bluebird nest on its first outing on campus. Binoculars drawn, birders viewed a pair of bluebirds going in and out of the nest.

“It is important for UW Oshkosh to set up nest boxes because this provides a good place for the many bird species to nest and hopefully have greater success at rearing offspring,” Spanbauer said, noting habitat loss may be the greatest threat to species conservation. 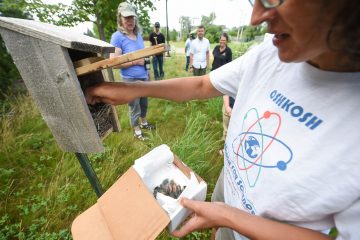 “We as humans inevitably alter environments and these changes can greatly impact the behavior and thus the reproduction and survival of many species,” he said. “The more we do to maintain and enhance habitat, the better.”

Bluebirds primarily eat insects and supplement their diet with fruits and berries. Mealworms, in particular, are bluebird favorites, but they also enjoy raisins, sunflower chips, suet dough and small chunks of fruit.

Khan said generally, Eastern Bluebirds are migratory, spending winters in the southern half of the U.S. “Birds that I band in Ripon have been recovered near St. Louis, Missouri, and as far away as Henry, Tennessee (614 miles away).

Bluebirds will typically start moving out in October or November. In some cases, if there is plenty of food and water, some will choose not to migrate.

Though bluebirds saw a decline in the early 20th century (due to competition with other birds, insecticide use that may have caused food declines and reduction in nesting sites), Khan said they currently are not considered endangered. 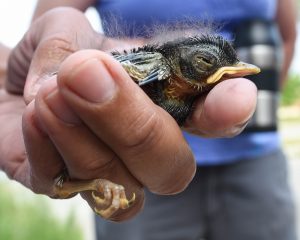 Populations are on the rise largely because of the establishment of nest boxes.

Members of the Bluebird Restoration Association of Wisconsin encourage citizens to erect bluebird boxes and actively manage them.

Khan and her students monitor a “nest box trail” of about 85 boxes in Fond du Lac and Green Lake counties on a weekly basis.

Khan color-bands all nestlings in her study area. She said banding allows a long-term database of the individual lifespan and reproductive success of known-aged birds. She said there is a slim chance the UWO nestlings could end up in Ripon next year, but she also points to the importance of the database if any banded bird is found dead or alive. Information can then be recorded about the bird’s travels and lifespan.