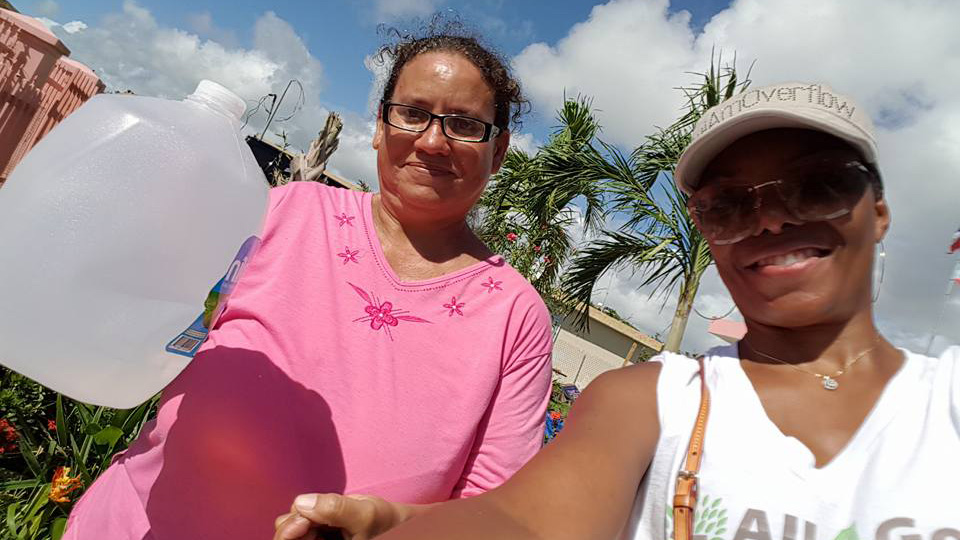 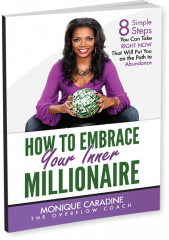 With a career that progressed from on-air radio host and media consultant to author and thought-leader on women, money and influence, University of Wisconsin Oshkosh alumna Monique Caradine never expected to add disaster relief worker to her resume.

But that was before Hurricane Maria pummeled her life and the lives of 3.7 million Puerto Ricans last September.

Despite weathering the winters in her native Chicago and learning how to cope with the tropical rains expected with her new life in Puerto Rico, Caradine was not prepared for a Category 4 hurricane and its devastating, 150-plus mph winds.

“That doggone Maria was one of the most ferocious, meanest, scariest experiences of my life,” said the 1993 radio TV film major who earned an Outstanding Young Alumni Award from the UWO Alumni Association in 1998. 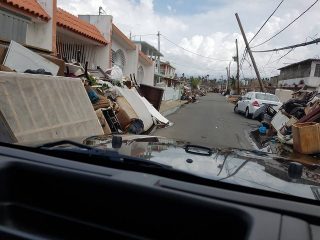 About 10 days prior, Caradine and her neighbors had hunkered down for Hurricane Irma, which just skirted the island.

“It was a little stressful with Irma, but we got through it,” she said. “Then here comes another one. So again we stocked up on canned goods and sand bags. There was tension in the air, long lines and anxiety.”

Although Sept. 18 was a beautiful day on the island, Caradine, her husband and son prepped their sturdy cement home for the storm, as emergency officials advised.

On the Sept. 19, the rain and winds picked up; the water was rough. The family enjoyed a favorite meal of tacos, before the power went out at about 8:30 p.m.

“By 1 a.m. on Sept. 20, there came a beating on our house from all angles,” she said. “It was just beating and beating, and we heard a big crash. The Spanish tiles on our roof were knocked off. It was the scariest moment of my life. There was nothing I could do to protect my family. I feared for my life.”

The rain put out a small fire that had started in an air compressor. The worst of the storm came through around 4 a.m.  Between 10 a.m. and noon on Sept. 20, people in neighborhood began to venture outside to survey the extensive damage.

Still no power in Cataño but my friend Evie still has a smile on her face. She didn't want to be photographed but she…

In the days and weeks to follow, Caradine checked on friends and neighbors. She quickly found herself helping out however she could, sharing her stockpile of food and water.

This is not what I had in mind for myself. Not at all. My plan was to be "the next O…." Lol! God obviously had…

Used to dressing the part of a TV and radio talk host, Caradine sloshed through storm debris to get water and medical supplies to Hurricane Maria’s victims. Late last month, officials raised the official death toll from 64 to 2,975. 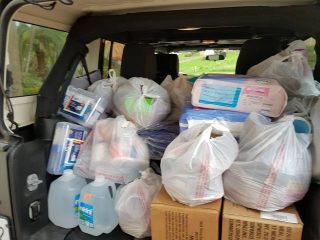 Caradine soon got involved with a hurricane relief team at her church. “It has been the most invigorating and exhausting experience of my life,” she said. “So many people needed help.”

For five months, Caradine was without internet or phone service. “My business died,” she said. “Helping recover from the hurricane was my full-time existence.”

There have been rough days as she has dealt with the trauma and some resentment when attention on Puerto Rico’s plight began to wane.

Hurricane Maria Chronicles ||| people are being led to believe that things are back to normal here in Puerto Rico. I'm…

There also have been joyful days as Caradine opened her home to neighbors who needed a shower. She even held hot dog barbecues and dance parties to take a break from thinking about the storm’s destruction.

The experience also has strengthened her faith. 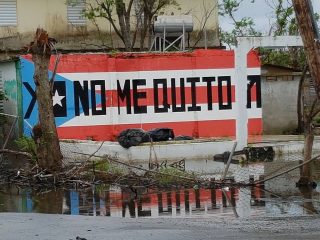 “I realize that people in Puerto Rico are stronger and more resilient that I ever imagined,” she said. “We survived by God’s grace.”

“Never underestimate the power of Mother Nature,” she said. “This experience has helped me to grow and expand the level of compassion I have for others. Always be open to a new path or journey in your life.”