UW Oshkosh journalism has adapted instruction to changes in technology 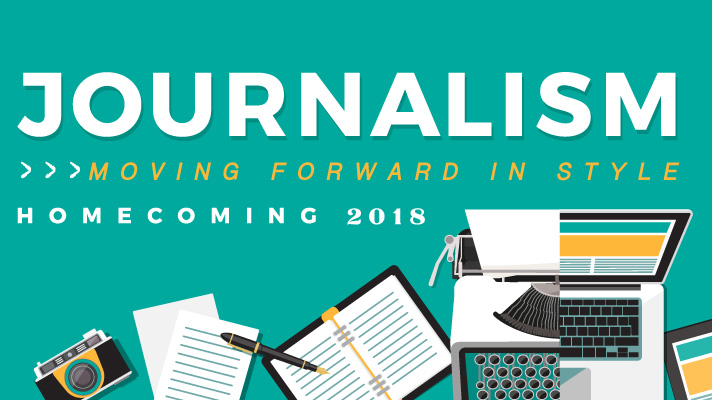 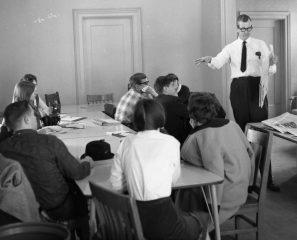 David “Doc” Lippert (standing) is credited with founding the Department of Journalism in 1968.

Just as employees work to keep up with the latest innovations, so do college faculty who help churn out future workers.

Advances in technology have drastically altered the study of journalism at the University of Wisconsin Oshkosh, especially in the past decade.

“I will say the constant changes in media and technology make for an exciting line of work no matter the discipline (multimedia journalism, advertising or public relations),” said UW Oshkosh Department of Journalism Chair and Associate Professor Sara Steffes Hansen.

As the journalism department celebrates its 50th year in conjunction with Homecoming Weekend Oct. 19-20, one can’t help but consider how different things are for today’s graduates from those carrying a diploma just a few decades ago.

Consider that the buzz of noisy newsrooms with the sounds of electric typewriters and myriad telephone conversations, have largely gone quiet. Email and text messages have become a much more likely means of communication.

News is happening and reported 24/7. It has appeared online for hours—sometimes days—before it appears as a printed product in someone’s hands.

Digital advertising provides immediate results for consumers who seek information about products and services on their computers and phones. And public relations has social media messaging at the forefront.

Barb Benish, longtime adjunct professor and newly minted adviser of the Advance-Titan student newspaper, recalled her excitement at receiving an electric typewriter for high school graduation. She graduated from UWO with a journalism degree in 1982.

She worked for the Oshkosh Northwestern during the 1980s and 1990s, when newsrooms included a lot of city directories, plat books and at least one large, library-worthy dictionary in a place of prominence in the newsroom. Today, there may be large flat screen televisions, multiple computers (at a single desk), cell phones and photographers with digital cameras, GoPro cameras and unmanned aerial vehicles—commonly known as drones—in their arsenal.

“It’s so much easier to be a reporter these days,” she said about the ability to connect with sources on social media. But she acknowledges that reporters today are expected to be on top of things virtually around the clock.

John Giesfeldt ’84, marketing manager with B&W MEGTEC in De Pere, a global supplier of environmental control technologies and engineered products, said there have never been more channels for reaching targets—from consumers to business.

“But despite the channel expansion, the need for relevant content hasn’t changed,” he said. “There’s just a need for more of it.”

Giesfeldt, who is chair of the UW Oshkosh Journalism Advisory Board, said public relations practitioners must assume everyone has a smart phone and is willing to use it at any time.

A multimedia journalism major was introduced this year.

“In this environment, they also must assume there is an open microphone,” he said. “Journalism programs that address the operating environment of today’s instantaneous multi-channel reality do a better job of preparing students to join the profession.”

Graduates who are in demand, he said, are prepared to contribute to communication and marketing goals and objectives of a company, with an understanding of how to develop an appropriate strategy.

Patti Purcell, owner of Writing by Design in Appleton, graduated from UW Oshkosh in 1989, with a journalism major and business minor. She worked for area financial institutions and Kimberly-Clark and then saw an opportunity in 2006 to create a company that specialized in writing.

Purcell said she founded Writing by Design by specializing in concept writing—articulating benefits and features of new products being considered for the marketplace. Del Monte, M&M Mars, Kimberly-Clark, SC Johnson are just a few on the company’s client list.

“Concept was being left to people with no writing skills or a junior copywriter with no business background,” Purcell said.

Strong digital skills as well as a background in marketing and journalism is something she highly recommends to students. Purcell stresses the importance of keeping up with advances.

“You get to that dinosaur stage if you don’t keep yourself relevant to the younger generation,” she said. “The gap can become really big, really quick.” 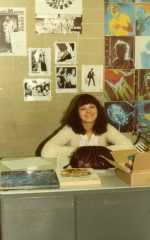 A typewriter sits near a staffer at the Advance-Titan.

President of the UW Oshkosh student Advertising Club, Whitney Wender, a senior who is double majoring in journalism and public relations with an advertising emphasis, said students must adapt to changes with the rise of technology.

“The way we view ads has entirely changed over the years and will continue to as technology develops,” she said.

Kahl stressed the importance of her internship with the Wisconsin Herd basketball team during its inaugural season as an organization. She learned about traditional public relations as well as social media and email marketing in a real-life setting. But she believes a team project her last semester of school to recreate a website for a local organization was catalyst to her first post-grad job.

“UWO journalism courses are engaging, hands-on and challenging, but in a really good, fulfilling way,” she said. “The curriculum and professors push you to work really hard towards realizing your full potential and how you can truly benefit any organization.” 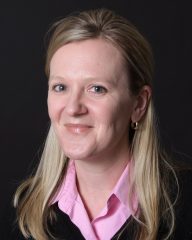 Hansen, the journalism department chair, said she spent a lot of time in the department’s archives as she prepared for the 50th celebration and helped write the timeline of its history.

“I came away with the realization that students of previous generations were not so different from students of today,” she said. “We are creative, truth-seeking storytellers—in journalism, public relations and advertising—and while the platforms to communicate have changed since 1968, our core values of truth, accuracy and objectivity have stayed constant.”