Hugs and well wishes between teammates begin each tournament round for members of the University of Wisconsin Oshkosh women’s golf team. For two of the Titans, those moments hold something extra special.

Every week, senior Kayla Priebe gets to hug and wish good luck to her younger sister Erika Priebe, one of two freshman in the Titans top 6.

“I am so incredibly happy to have my sister on the team with me,” Kayla said.

That UWO connection runs deep in the Priebe family. 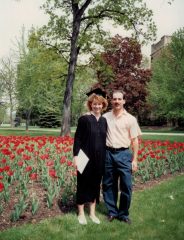 Dennis Priebe followed in the footsteps of his father Dennis Priebe Sr., who attended UW Oshkosh. While working towards an accounting degree, Dennis also served as a community adviser (CA) for Breese Hall. It was during a hall picnic at the beginning of the school year that he met second-year student–and Breese Hall resident–Kris Isely.

“After meeting her, when I did rounds, I always made sure to stop by Kris’ room on the fourth floor,” he said.

Dennis went on to graduate with an accounting degree in 1991, Kris graduated a year later with a degree in journalism and three years after the fated meeting at the Breese Hall picnic, the two were married.

The Priebes settled in Appleton and had two girls, Kayla and Erika, who excelled at both school and the game of golf. Neither parent could have predicted that both daughters would decide to attend UWO.

“Kayla attending UW Oshkosh was a surprise as we always assumed she would play Division I golf, and she did not visit the campus until April of her senior year in high school,” Dennis explained. “Once we visited campus, we were extremely impressed with the accounting and business programs. And once we met Coach (Liza) Ruetten, we knew she would do a great job working with Kayla as a golf coach and as a person.” 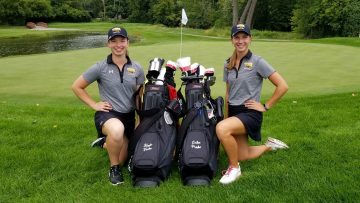 Kayla has thrived in her first three years at UWO. She was named Wisconsin Intercollegiate Athletic Conference (WIAC) Player of the Year in 2016, earned All-WIAC honors three straight seasons and was tabbed Women’s Golf Coaches Association (WGCA) All-American twice. The accounting major has also had three internships, one with a public accounting firm in Appleton and two with Thrivent Financial.

“I didn’t want to come to UW Oshkosh at first because my parents went here, and I wanted to take my own path,” Kayla said. “However, now that I am here and have had such a good experience, I’m glad that everything worked out to lead me to UWO. It is really fun to have parents who can support me in school and golf, but who also love supporting as proud alumni.”

As Kayla was forging her path at UW Oshkosh, Erika was doing the same at Fox Valley Lutheran High School. The younger Priebe finished in the top 16 at state her first three years and culminated her high school golf career by winning the WIAA Division 2 state championship in 2017, becoming the first Appleton high school girls golfer to do so since 1995.

As the No. 7 golfer in the Wisconsin.Golf rankings for the Class of 2018, Erika had many options of colleges to attend. But, like her sister, she did her due diligence when deciding which university to attend.

In March, Erika officially decided to continue the family legacy by becoming a Titan and pursuing an accounting degree.

“It is special to be able to say that my whole family went to the same college,” Erika said. “Not too many people are able to say that. It just shows that we think UW Oshkosh is a great school.”

It didn’t take long for the sisters to begin making a mark and making memories together at UW Oshkosh. The duo helped the Titans win their opening tournament of the year, the Titan Golf Classic. They have gone on to help the Titans secure top three finishes in three other tournaments, including winning the UW-Stevens Point Mad Dawg Invitational this past weekend.

Individually, both are playing some of their best golf; Kayla has posted second place finishes in three of UWO’s five tournaments thus far, and Erika has posted four top-15 scores, including tying for fourth at the Titan Golf Classic.

“It’s been great to play with my sister again,” Erika said. “We get along really well, and it has been comforting to know that she is there with me.”

For Kayla, a senior leader, she couldn’t be prouder of her sister’s success.

“I’m so happy to see Erika thriving, both as a sister and a teammate,” she said. “As her older sister, I want her to be successful in everything she does, so I’m happy about her success. As a teammate, it is easy to see that our two freshman (Erika and Margherite Pettenuzzo) have helped bring our team to the next level and shoot some of the best tournament scores the team has had in my four years.”

And for Dennis and Kris, seeing their daughters together again is as special as it comes.

“We loved the one year of high school when they played on the same team and to have that again is incredible,” Dennis said. “It is really fun when they cross paths during a tournament and just give each other a little wave or smile or a word of encouragement. For our family, it is great to be at one location with one set of college gear cheering on our team.”

Hoping to make history at the WIAC Championship

Erika and Kayla are headed into the biggest weekend of the season. The sisters and the Titans travel to Reedsburg for the WIAC Women’s Golf Championship, held at Reedsburg Country Club. The Titans won their fourth overall WIAC Championship Kayla’s freshman year in 2015 to secure UWO’s first NCAA Championship bid since 2003 and are looking to do it once again.

Kayla’s advice to her sister for this weekend is simple. “Focus on your own game. Don’t worry about the people you are playing with; pretend it’s just you and the course and give every day your best effort. And most importantly, have fun while you do that!”