The University of Wisconsin Oshkosh College of Nursing (CON) was recently recognized as one the nation’s best nursing schools in 2018 by the American Association of Men in Nursing (AAMN), a group dedicated to shaping the practice, education, research and leadership for men in nursing.

Several UW Oshkosh representatives from the Great Lakes chapter of AAMN (GLAAMN) were formally recognized at the association’s annual conference on Oct. 4 in Milwaukee.

According to census data, in 1970, men comprised less than 3 percent of the registered nursing workforce. Fast forward 50 years, and that number has gradually climbed to 9 percent.

Determined to bridge the gap, efforts to diversify this profession are being made by hospitals and educational institutions across the country. The CON is at the forefront of this initiative. 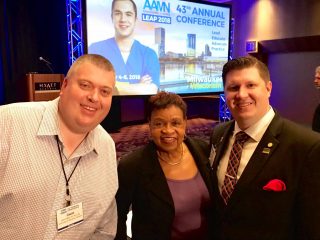 Will Nebus, of Flint, Michigan, was among the representatives who attended the conference. Nebus is a senior 2 nursing student and a board member at large for GLAAMN. He is set to graduate in December.

Reflecting on his experience in a program traditionally pursued by women, Nebus holds his education from UW Oshkosh in high regard. Though he is among the gender minority within the college, he never felt like “one of the few men” in his classes.

“It’s cool seeing men with advanced degrees in nursing,” Nebus said. “Society is definitely gravitating away from the perceived stigma of male nurses.”

Jason Mott, an assistant professor for the CON, described his own nursing education as a stark contrast to the environment of UW Oshkosh. As a student, Mott had no male nursing professors. Even in his early career as a registered nurse, male colleagues were few and far between. 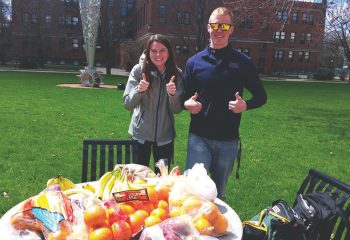 “I value being a mentor for the male nursing students at Oshkosh,” Mott said. “They’re comfortable asking me questions and bouncing ideas off of me. That’s something I never had as a student.”

Mott serves as a faculty adviser for GLAAMN. Aside from its focus on men in nursing, the chapter primarily aims to foster leadership, instill a sense of purpose and facilitate inclusion among students. It’s proven to be a great support network for students in the nursing program.

GLAAMN is dedicated to improving the health of campus and the community. As a chapter, members participate in a variety of volunteer and outreach services, including Kicking Butts Off Campus, Fresh Fruit Fridays, Run With the Cops, campus flu shot clinics and other initiatives.

For more than 50 years, the CON been acclaimed for quality teaching, research and scholarship. Still today, the CON continues its mission to develop caring and scholarly nurses in an inclusive environment.