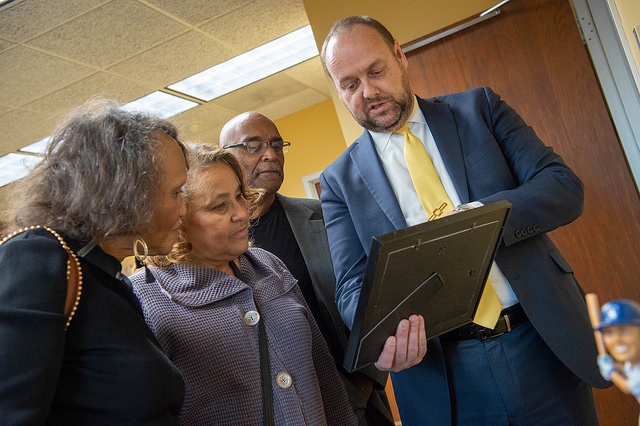 Henry Clay stood in the cold outside Dempsey Hall for a full 15 minutes as he considered entering the building that was the site of such a deep hurt half a century ago. He had traveled all the way from St. Louis, Missouri, for the moment.

“It’s still emotional to step inside—I know how I came out (50 years ago),” he said. 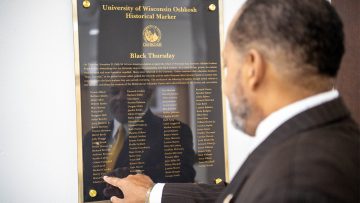 Henry Clay looks at the historical marker within Dempsey Hall during his visit to campus.

Indeed emotions have been running high as the University of Wisconsin Oshkosh remembers the events of Black Thursday that occurred Nov. 21, 1968. That day, a group of 94 African-American students stormed the president’s office—overturning items, even throwing a typewriter out the window—as they demanded he address their concerns over widespread racism on campus. The students were arrested, jailed and subsequently expelled from school.

Some went to work, some entered the military and others went on to other campuses. Some were allowed to eventually return to UW Oshkosh.

A two-day 50-year anniversary remembrance of Black Thursday was especially poignant, as 37 of the Oshkosh 94 and their families and friends came on campus Nov. 14 and 15—some for the first time since 1968.

Now 68 years old and working as an assistant admissions director at the University of Louisville, Clay said returning to UW Oshkosh was something he had to do.

He remembers a professor calling him the “N word” and telling him where he could sit in class. He remembers a white student spitting in his food at Reeve Union. 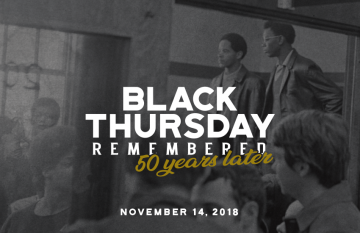 “I was not going to have it no more,” he said, recalling being taken down the back steps of Dempsey Hall. “I was scared to death. I remember them putting us in a truck like cattle (to go to jail.)”

On a bus tour last week around campus, Clay and other classmates marveled at the new buildings on campus and excitedly shouted to each other about places they played basketball, went to the library and about the Oviatt House, which used to be the president’s residence. The group was impressed with the new classroom buildings and new student housing. They visited places including Blackhawk Commons, Reeve Union and the Multicultural Education Center.

Margot Brand and her college roommate from 1968 attended the Black Thursday re-enactment and video event Nov. 14. They were two white students who were opposed to the treatment of African-American students. After the arrests of the Oshkosh 94, they decided they would have a “sit-in” in the administration building and intended to stay all night.

The need to take part in final exams changed their plan, but Brand’s roommate, so angered by the situation, did not return to school for the spring semester.

Brand completed that semester in her fine arts program but left school because she felt professors were not being supportive of the African-American students. 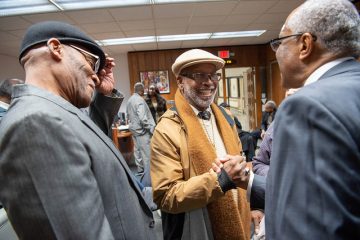 “I think this event (at UW Oshkosh) was healing,” she said a day after the special evening while shopping at University Bookstore for her first-ever alumni item. “I finally am proud of my alma matter.”

Likewise, a number of the visiting Oshkosh 94 selected apparel in the bookstore last week to wear proudly at their workplaces and hometowns.

Oshkosh 94 member Joel Johnson is a retired teacher who still works as a substitute for the Milwaukee Public School system.

He said after he was expelled, he was reinstated the following year and earned his degree from UW Oshkosh in education and human services.

He said he encourages his students to go to college and specifically UW Oshkosh. He purchased some souvenirs and clothing to take with him to his high school classrooms around Milwaukee.

Sheila Knox, another member of the Oshkosh 94, served on the Black Thursday Remembered committee. Knox will be recognized Dec. 15 at Commencement with an Honorary Doctorate degree, in part for her work in preserving the story and legacy of the Oshkosh 94.

Knox came to Oshkosh in 1968 from Milwaukee. She said it was a time of unrest. There were no black professors. White students and “town people” were not kind to African-American students. There were delays receiving meal tickets and financial aid.

She remembers being hauled away in a U-haul-style truck. 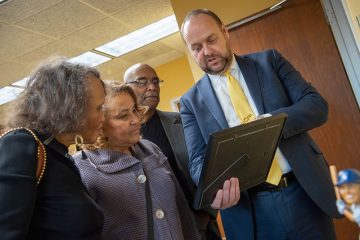 “It was hard to get back on track,” she said about the events of Black Thursday that she said haunted her then and still haunt her today.

Kercher said it was “enormously gratifying” to see so many members of the Oshkosh 94 return to Oshkosh and be recognized by the University.

“When we launched the Black Thursday Remembered Oral History Project in 2006, I don’t think that any of us had the idea that our work would have the impact it has had—on the University, on the community, and most importantly, on the lives of the Oshkosh 94,” he said.

Carey-Butler said the Oshkosh 94’s stories moved her in a profound way and the UW Oshkosh community can’t thank them enough for their sacrifices.

Oshkosh 94 member Henry Brown III credited all the participants of the event who “honored our legacy and put a new face to UW Oshkosh.”

He said the power of the presentation left a lump in his throat.

“I can speak for most to tell you, we are actually proud to be the long-suffering,” he said, “because redemption is so sweet.” 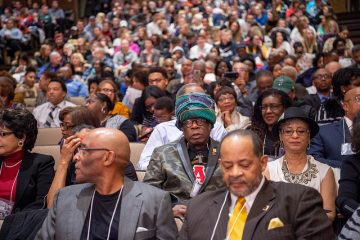 Chancellor Andrew Leavitt formally apologized to members of the Oshkosh 94 and their families for the wrongs that occurred 50 years ago.

He said hoped the Black Thursday Remembered events on campus will aid in the healing process and said he also hopes it would not be the last time they return to campus.

“Let me take this opportunity as the chancellor on the 50th commemoration of Black Thursday, to apologize formally to you all on behalf of the University community for the way you were treated, for how your lives were disrupted and transformed,” Leavitt said. “I cannot change the past, but I will tell you, your impact on me as Chancellor and your impact on the entire University community has been, and remains, profound.”

When multi-sport athlete Robert Hayes, another of the Oshkosh 94, began classes in 1965, he said he was one of the first black students on campus.

He said he “wasn’t losing to anybody” as he stormed into the President’s office that fateful day.

Fast-forward to 2018 and a young African-American student sought his advice on how to maintain composure when experiencing racism. 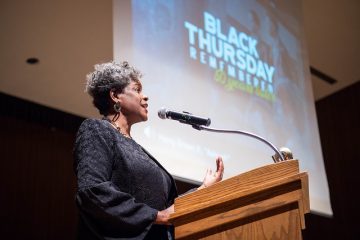 Another student, Shannon Hollimon, a senior from Racine majoring in criminal justice, said she was grateful to have had the opportunity to meet the members of the Oshkosh 94.

“It was very difficult to hold back tears while listening to their stories because it was so heartbreaking to hear the horrifying things they experienced while attending this University 50 years ago,” she said. “While hugging and exchanging a few tears with Mr. Clay, he expressed how much he wanted us to continue striving and reaching our educational goals. He said he knows what our potential is and that we will live up to that. He told me how proud he was that I was graduating this December while also serving as a strong leader here on campus.”

Hollimon said she first learned about Black Thursday when she applied for the African-American Leadership Scholarship, which she was awarded in 2017.

She said she did a lot of research on Black Thursday and those involved.

“Attending the two events held to commemorate these individuals gave me more insight on what they went through,” she said. “There are no words to describe the gratitude I have for the Oshkosh 94 and their strength and courage to stand up for what they believed in—not only for themselves but for our future.”