As a University of Wisconsin Oshkosh student played classical guitar for residents of a skilled nursing facility, he hoped he provided relaxing entertainment for the elderly he befriended over the course of the semester.

Eddie Uttendorfer, of Fond du Lac, plans to graduate from UW Oshkosh in fall 2019, with a degree in music composition. He got his start in college at UW-Fond du Lac and has been a featured musician for celebrations at the Fond du Lac campus.

He is taking an anthropology class this semester taught by UW Oshkosh associate professor Stephanie May de Montigny.

Since 2016, May has included student interaction with residents at Miravida Living in Oshkosh, as part of her classes. In the fall semester of that year, she had students in her ethnographic research methods course do a project collecting elders’ stories and creating a book for them.

More recently, she’s had her students do independent study and capstone research projects involving the residents at Miravida. Students have been studying aging in different cultures around the world and their experiences help them dispel stereotypes they may have and get a firsthand view of life as an older adult. 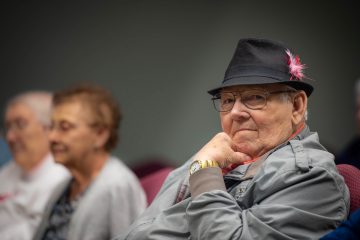 At Miravida, Uttendorfer soon connected with a gentleman named Harley.

“Over the course of the semester, I have gained a better understanding of who Harley is as a person,” Uttendorfer said. “Slowly but surely, he warmed up to me and we now consider each other as friends.”

Carissa Meyer, life enrichment coordinator for Miravida, said there was a time when Harley wasn’t coming out of his room.

Meyer would invite him to activities and entertainment, but it wasn’t until Uttendorfer encouraged Harley that he showed an interest.

“To see him out with Eddie was awesome.” Meyer said.

Uttendorfer said it is good for students to do something that takes them beyond their comfort level. It will happen in future careers and in life.

“Going to a retirement home to visit with strangers was awkward at first, but it became more comfortable as time went by,” he said.  I learned more about empathy and what it takes to look past initial judgments to find the truth about individuals.”

Harley, who would typically sit in the back of the room for entertainment events, was seated front and center last week as he watched Uttendorfer skillfully pluck the strings of his guitar.