A University of Wisconsin Oshkosh student public relations team is getting a reputation for delivering award-winning campaigns—capturing first place honors in a national competition after finishing in the top three a year ago. 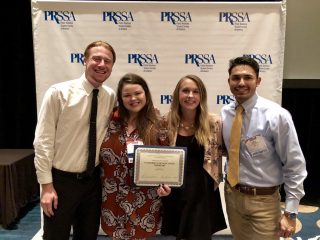 “Our chapter feels that Cycle of Life was an honest and genuine campaign focused on bringing even more positivity and grace to the conversation around organ donation,” said UW Oshkosh PRSSA Chapter President Brianna Colebourne. “The cycling theme helped relate organ donation to a story that millions of people across the world followed.”

Reich is a junior, while Colebourne, Gulotta and Brault are seniors.

The Cycle of Life Campaign raised awareness across the UWO campus about the importance of organ donation. Events centered around Bill Conner who biked 2,600 miles to hear his daughter’s heart beat in her recipient’s body. The two-day event included a speech from Conner in Reeve Union, where he told the story of his biking journey from Wisconsin to Louisiana for his daughter and stressed the importance of organ donation.

A 26-mile cycling class was offered in the UW Oshkosh Student Recreation and Wellness Center to honor his 2,600-mile biking journey. The two events prompted 50 people to sign up on the national organ donor registry.

Judges said the UW Oshkosh campaign, which was alongside some Div. I schools— “blew competition out of the water with their incredible social media presence and unique campaign idea.”

The competition challenged universities to put on a unique day-long event to increase awareness and spur enrollment in the national organ donor registry.

PRSSA chapters from across the country competed in the competition.

The UW Oshkosh PRSSA chapter received a cash prize, which will be used to help support next year’s campaign, and was formally recognized at the 2018 PRSSA National Conference in Austin, Texas.

Some of the key achievements that led to the success of the campaign include capturing 4,741 total social media impressions over social media platform, including Facebook, Instagram and Twitter; and Conner’s talk that prompted more than four dozen people to sign up on the organ donor registry. The chapter distributed hundreds of buttons and promotional flyers around campus to educate UW Oshkosh students.