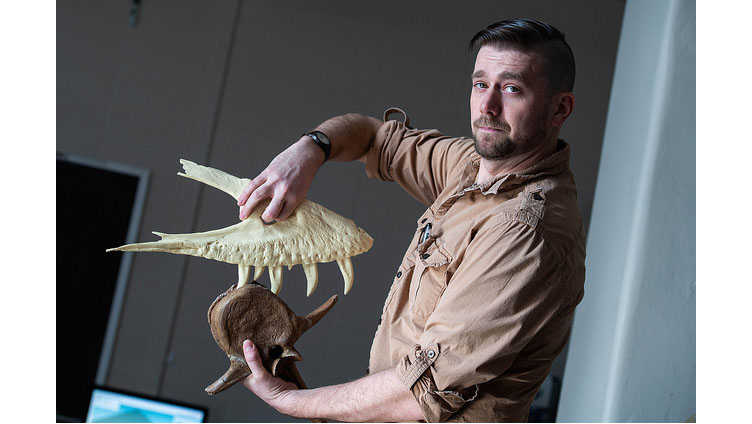 New research from the University of Wisconsin Oshkosh indicates that even as a teenager the Tyrannosaurus rex showed signs that it would grow up to be a ferocious predator.

In a study published last week in the peer-reviewed journal Peerj—the Journal of Life and Environmental Sciences, UWO scientists reported evidence that a juvenile T. rex fed on a large plant-eating dinosaur, even though it lacked the bone-crushing abilities it would develop as an adult. 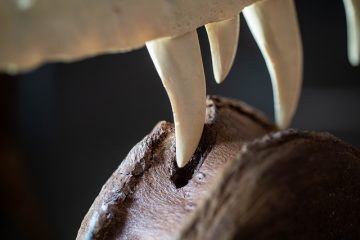 While studying fossils from an Edmontosaurus—a plant-eating Hadrosaurid or duck-billed dinosaur, UWO vertebrate paleontologist Joseph Peterson noticed three large, v-shaped, bite marks on a tail bone and wondered, “Who made these?”

“We suspected that T. rex was responsible for the bite marks, because in the upper Cretaceous rock formation…where the hadrosaur was discovered, there are only a few carnivorous dinosaurs and other reptiles in the fossil record. Crocodile fossils are found there, but such a crocodile would have left tooth marks that are round rather than the elliptical punctures we found on the vertebra,” Peterson explained.

“There also were small Velociraptor-like dinosaurs, but their teeth are too small to have made the marks. Finally, an adult T. rex would have made punctures that would have been too large! That’s when we started considering a juvenile tyrannosaur.” 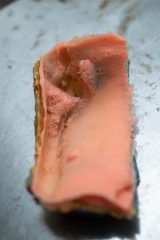 To test the hypothesis, Peterson and geology student Karsen Daus, of Suamico, coated the fossil with a silicon rubber to make a silicone peel of the puncture marks.

They found that the dimensions of the “teeth” better matched a late-stage juvenile T. rex (11 to 12 years) than an adult (approximately 30 years).

“Although this T. rex was young, it really packed a punch,” Peterson said.

“This is significant to paleontology because it demonstrates how T. rex—the most popular dinosaur of all time—may have developed changes in diet and feeding abilities while growing,” he said. “This is part of a larger, ongoing research initiative by many paleontologists to better understand how T. rex grew and functioned as a living creature over 65 million years ago.”

Most theropod feeding traces and bite marks are attributed to adults; juvenile tooth marks rarely have been reported in the literature, he added.

“We really are in the ‘Golden Age’ of paleontology,” Peterson said. “We are learning more now than we ever thought we would know about dinosaurs. And, we’re learn more about how they grew up.”

In April 2018, Daus received an Outstanding Undergraduate Research and Creative Activity Award for her work with Peterson on this project.

“The UWO geology department places an emphasis on students learning and participating in geologic research and field work, Daus said. “As my research adviser, Dr. Joseph Peterson has encouraged and led me in field work that has prepared me for my future as a geologist. This past summer, I had the honor of working with Dr. Peterson’s incredible excavation team at the Cleveland-Lloyd dinosaur quarry. Without the dedication that Dr. Peterson shows to his students, opportunities like this would not exist.”