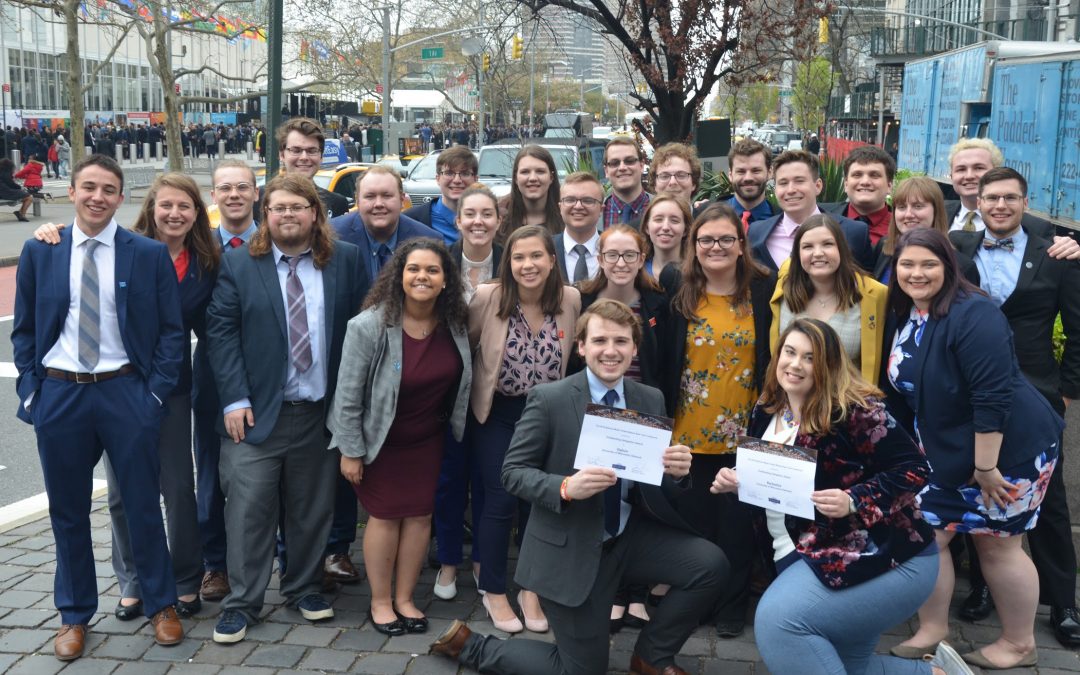 After a year like no other, the University of Wisconsin Oshkosh Model United Nations (MUN) team returned from the National Model United Nations (NMUN) conference as champions.  Although they are accustomed to taking top honors at the conference—indeed, this was their 35th year of victory—this year’s result felt particularly sweet.

The team represented two countries at the conference, Gabon and Barbados.  Sixteen members of the team served as delegates from Gabon and 10 from Barbados, and each member had specific areas of expertise relative to their country’s priorities. 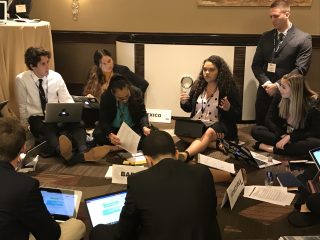 For the duration of the conference, the team was spread across several ballrooms in two hotels, negotiating with other represented countries on issues ranging from antimicrobial resistance to nuclear weapons.  Each member of the team negotiates with students from all over the world, and rooms vary in size from about 40 to over 400 student delegates.  Earning top honors at the conference means that the entire team is recognized for excellence in negotiation, diplomacy, and remaining true to each country’s actual priorities.

The highest honor at the conference, the award for Outstanding Delegation, is given to only about 10 percent of teams, and was earned by both Gabon and Barbados. This year marked monumental success as the team won the most peer awards across both delegations in MUN history, and Gabon was recognized as the most influential delegation across the entire conference.

In addition, team members won multiple awards for their written position papers and also were selected by their peers from other schools as outstanding delegates in committee.

The team’s faculty adviser Tracy Slagter said there are many people to thank for this year’s success. 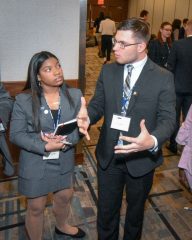 “The MUN Executive Board, and notably MUN President Matthew Clowney and Vice President Zoe Dahse, were exceptional leaders all year, and it paid off in New York,” she said.

She also noted alumni advisers David Litman ’12, Chase Mitchell ’15, and Karee Orrick ’18, for their expert advice on the team’s performance all week.

Slager said the biggest thanks goes to Kenneth Grieb, the team’s long-time adviser who passed away in July.

“He instilled a passion and work ethic in this team that survives year after year, and that is why they’re so successful. They are his legacy, and an immeasurable gift to me,” she said.

“For a year in transition, the Oshkosh MUN executive board thanks Dr. Slagter for her continued support and influence in picking up the pieces this year, and assisting our team in the year’s monumental victories. We are excited to see her continue to lead MUN,” she said.

The team’s honors are as follows:

Names in italics are graduating this spring.

The team will begin the quest for its 36th victory in September 2019 and will start recruiting new members. It will be hard to replace the depth of knowledge and experience graduating seniors are taking with them, but the team is committed to training and developing new leaders, no matter their previous experience. Students from all majors are welcome to join.

If you or someone you know is interested in negotiation, international affairs and team-building,  send an email to modelun@uwosh.edu or find MUN next year at Taste of Oshkosh.