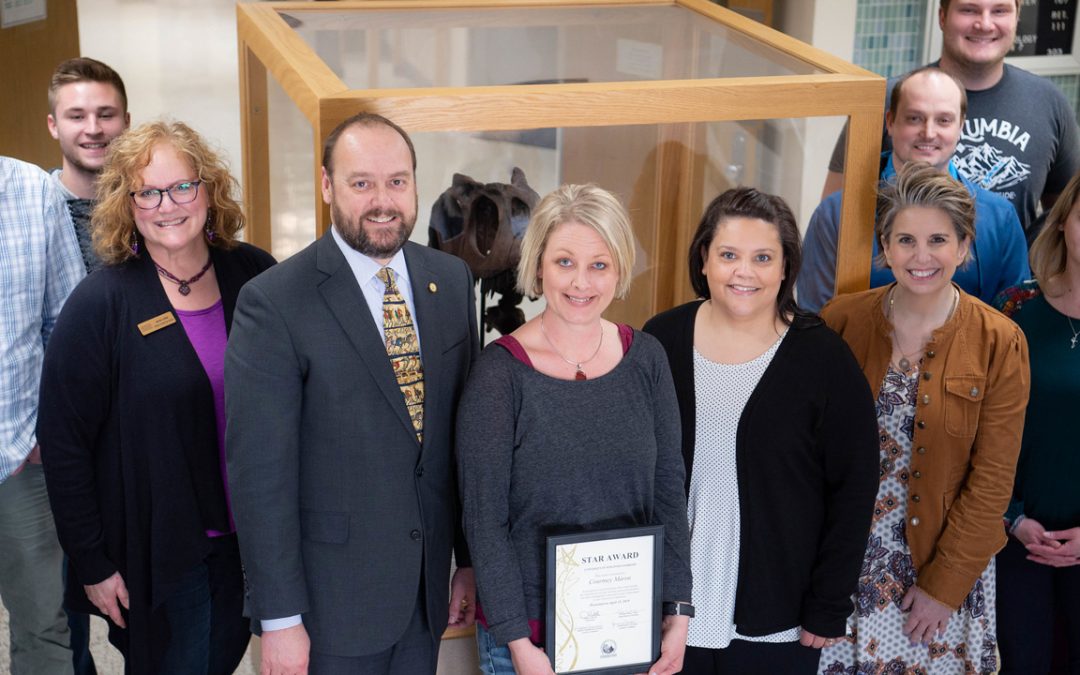 Courtney Maron, who works for the geology department as an academic department associate at the University of Wisconsin Oshkosh, has been named the recipient of the May 2019 STAR Award.

She was nominated by Tim Paulsen, a professor in the geology department.

“Courtney Maron is an academic department associate for the geology and math departments in the College of Letters and Science. In geology, Courtney provides high-level, effective and impactful support for the program. Although the quality of her support merits recognition on its own, she has gone well beyond her normal job responsibilities in at least two important ways.

“First, on her own initiative, Courtney has integrated herself with support provided for the operation of the Geology Club, one of the most active student organizations on campus. She provides reliable support for club members in their efforts to host professionals for the Geology Club Speaker Series (the most active speaker series on campus). She also provides support for club business and activities that include trips, budgets, participation in the Oshkosh Gem and Mineral Show, the annual Geology Club Jewelry Sale in Reeve Union, Taste of Oshkosh, and the Geology Spring Banquet. She is in fact so active in support of the club that she has cooked for and attended student potlucks thrown in honor of Geology Club speakers. There is no expectation that she cooks for or attends these after-hour events. She does so because she recognizes the value in our program and the importance of our mission to educate the next generation of students.

“The second and perhaps most important, yet overlooked way that she has gone beyond her duties is how she serves as a high-quality mentor for UW Oshkosh students, including those within our general education classes, as well as our majors. Geology students recognize her natural desire to help them. They visit her when they have academic and personal issues. They do so because they recognize that she is an effective problem-solver, making her a ‘go-to’ for students when issues need solutions. Her assistance and guidance help assure student progress toward graduation and, ultimately, their success at UW Oshkosh. All in all, she is a perfect choice for the STAR Award.