Wrensch leaps to a National Championship

She broke the school record in the long jump during the indoor track and field season.

She placed third at the NCAA Division III Women’s Indoor Track and Field Championship, earning the first All-America honor of her career.

Moving into the outdoor track and field season, University of Wisconsin Oshkosh senior Lauren Wrensch set her sights on much more.

“Heading into the outdoor season, I wanted to build off my success during the indoor season. I was hoping to repeat these accomplishments,” Wrensch said. “It was definitely a goal of mine to take first at nationals in the long jump.” 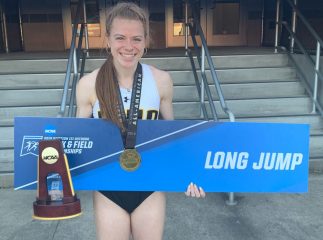 Battling a hamstring issue during indoor season and one that lingered into the outdoor season, Wrensch initially thought her goal of winning a national championship seemed unlikely.

“At the beginning of the season, the goal seemed a little far-fetched,” she said.

A nation-leading leap of 19-4 to start the outdoor season washed away any doubt. Wrensch won the opening event at the Carroll University Invitational with the monster leap and rattled off two more long jump victories leading up to the WIAC Outdoor Track and Field Championship.

She repeated as the WIAC long jump champion, with a leap of 19-4 1/4 to defeat 20 other competitors and added a 400-meter championship as well.

“The outdoor season prepared me very well for the NCAA Championship,” Wrensch said. “I had great competition for long jump within the WIAC, so every meet pushed me to compete against my competitors and myself more than I normally would.”

She also credits the atmosphere at the prestigious Drake Relays for preparing her for nationals.

“Being able to compete in the open long jump at the Drake Relays really gave me a taste of an extremely competitive meet with higher pressure,” Wrensch said. “This was especially helpful because during the NCAA Championship I knew how to handle the intense atmosphere and focus on my performance only and not get overwhelmed.”

Wrench headed into the three-day NCAA Championship seeded third in the long jump. The event was scheduled for the first day and she was the first female Titan to compete.

“On the day of the competition, I was lucky that I didn’t compete until 5 p.m., so I had the entire morning and into the afternoon to relax and take my time getting myself ready,” she said.

Despite being lucky to not compete until later in the day, Wrensch was in the second flight of jumpers for the competition so had to sit and wait until the opening flight was finished jumping. 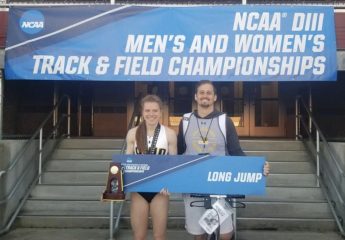 “In the past, it had been my downfall focusing too much on what everyone around me was jumping and it affected my own performance,” Wrensch said. “I purposely did not pay too much attention to what distances were announced from the first flight and I just tried to stay calm and focus on myself.”

When it finally was her turn, Wrensch jumped 19-4 1/4, which tied her personal best and was good enough to earn a spot in the finals.

“I started further back on the runway than usually because it was pretty windy and I wanted to avoid scratching,” Wrench said. “Having that opening jump guarantee me a spot in the finals was a huge weight off my shoulders.”

Heading into her third jump, she knew Isabel Maletich, of the University of Chicago, had jumped 19-9 to lead the pack.

“I knew Isabel’s jump put her into the lead but I told myself I had four more attempts left and I should focus on the jump itself and not the numbers,” Wrensch said. “Funny enough, my third attempt didn’t feel that amazing but immediately my coach said he didn’t know the number but it was far.”

“When 19-11 flashed on the board I was really shocked but so excited that it was that good on a jump that didn’t feel that great,” she said.

Wrensch and the other competitors still had three more attempts each and it wasn’t until she scratched her final attempt and that she got confirmation from Titan head coach Justin Kinseth that she won the National Championship. 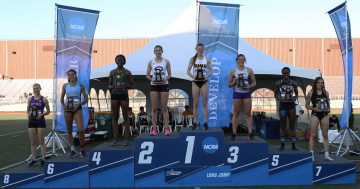 “It was an indescribable feeling,” Wrensch said. “I walked over by my coach and so many of my teammates were there hugging me and congratulating me. When they announced my name for national champion and my coach gave me my first place trophy, that feeling was so surreal. My family and teammates were all standing at the front of the stands cheering for me and my heart just felt so full.”

“Being a long jump national champion means everything to me,” Wrensch said. “Personally, when I started long jump four years ago, I wasn’t anything too special yet but I had potential to be. So being a national champion by jumping almost a meter further than when I first started is a testament to how hard I worked for this and how much I have given to this sport.”