Titans Are Champions: A year in review 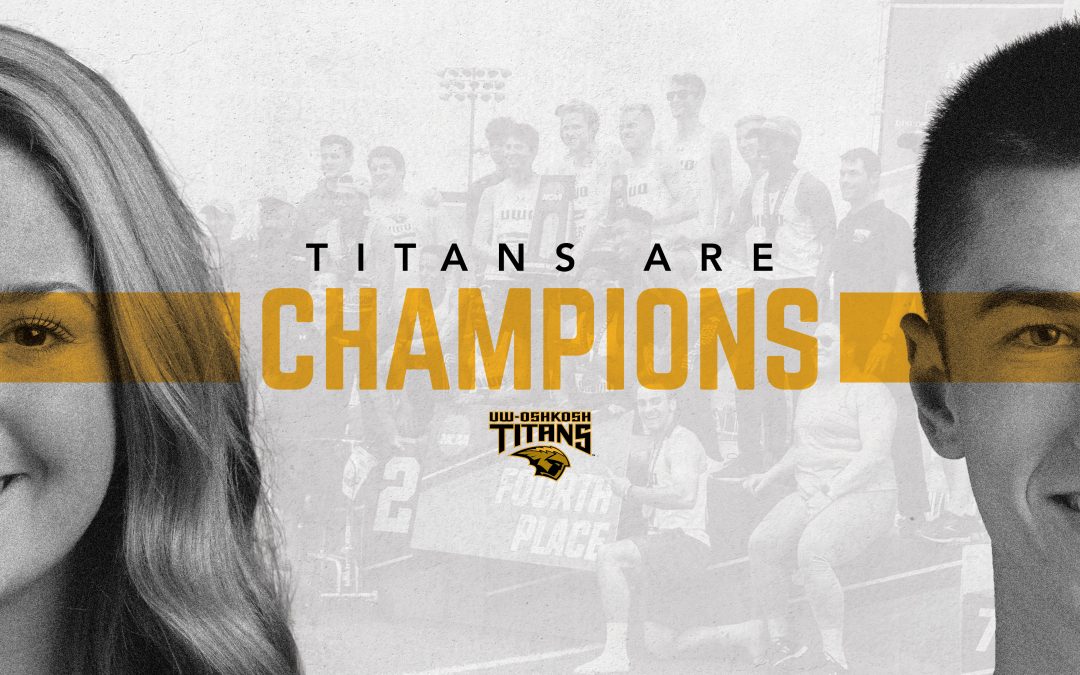 The 2018-2019 University of Wisconsin-Oshkosh athletic season will not soon be forgotten. Three teams reached the postseason, while eight other programs had individuals reach the postseason.

A glimpse at how all the Titan teams did this past season is below: 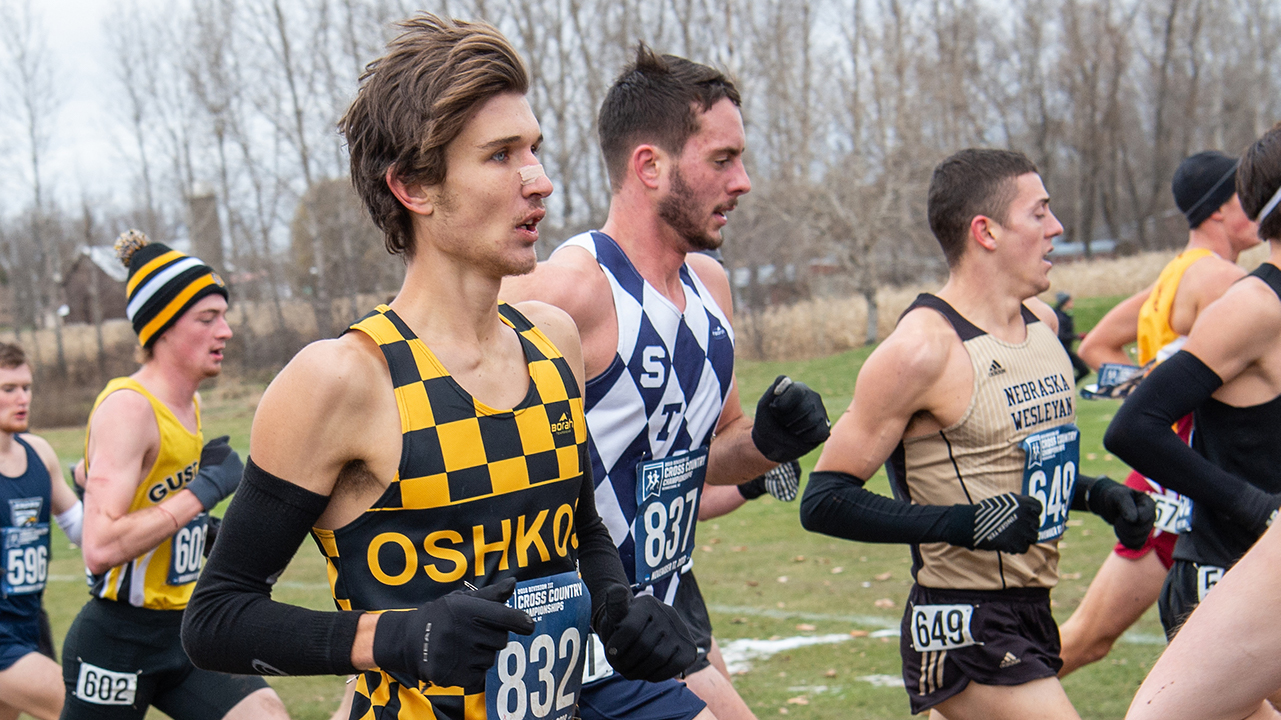 Sophomores Lucas Weber and Cody Chadwick represented the Titans at the NCAA Division III Championship. Weber and Chadwick earned two of the 56 at-large berths into the national meet by finishing 21st and 26th, respectively, among 253 participants at the NCAA Division III Midwest Regional. Chadwick went on to place 67th and Weber 143rd at the national championship. Chadwick finished in a time of 25:22.1, and Weber in 25:50.3. 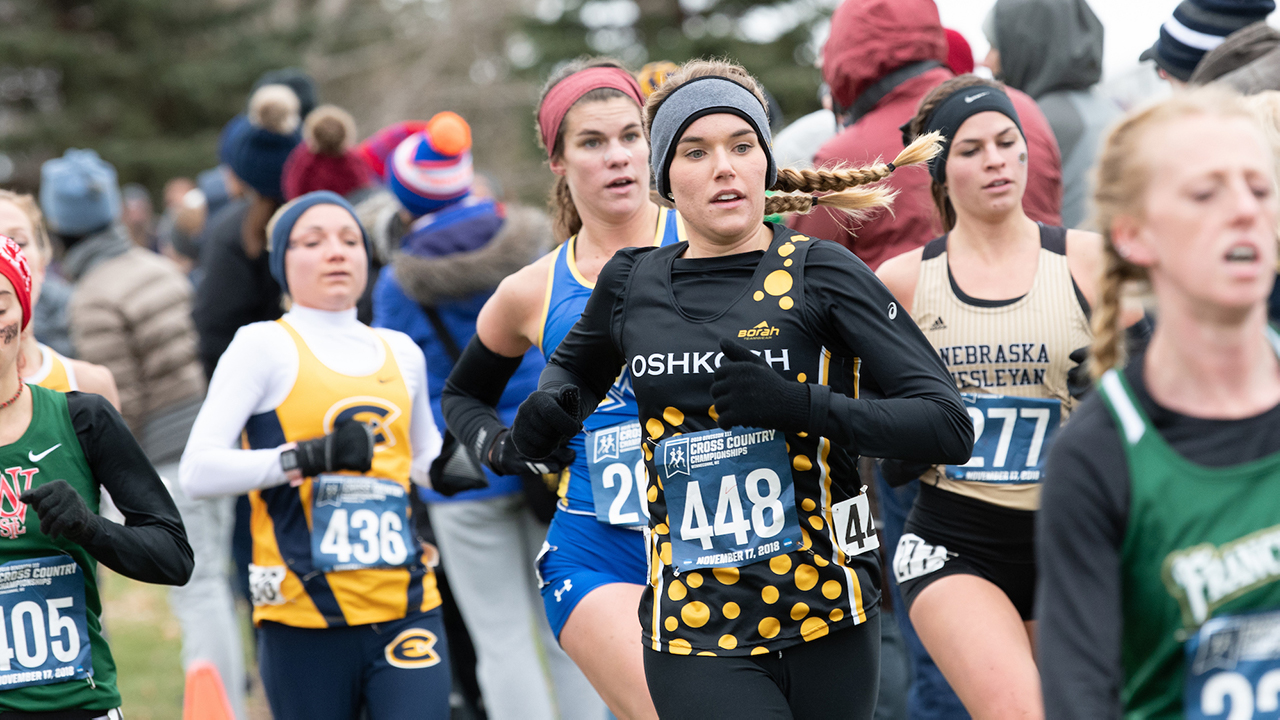 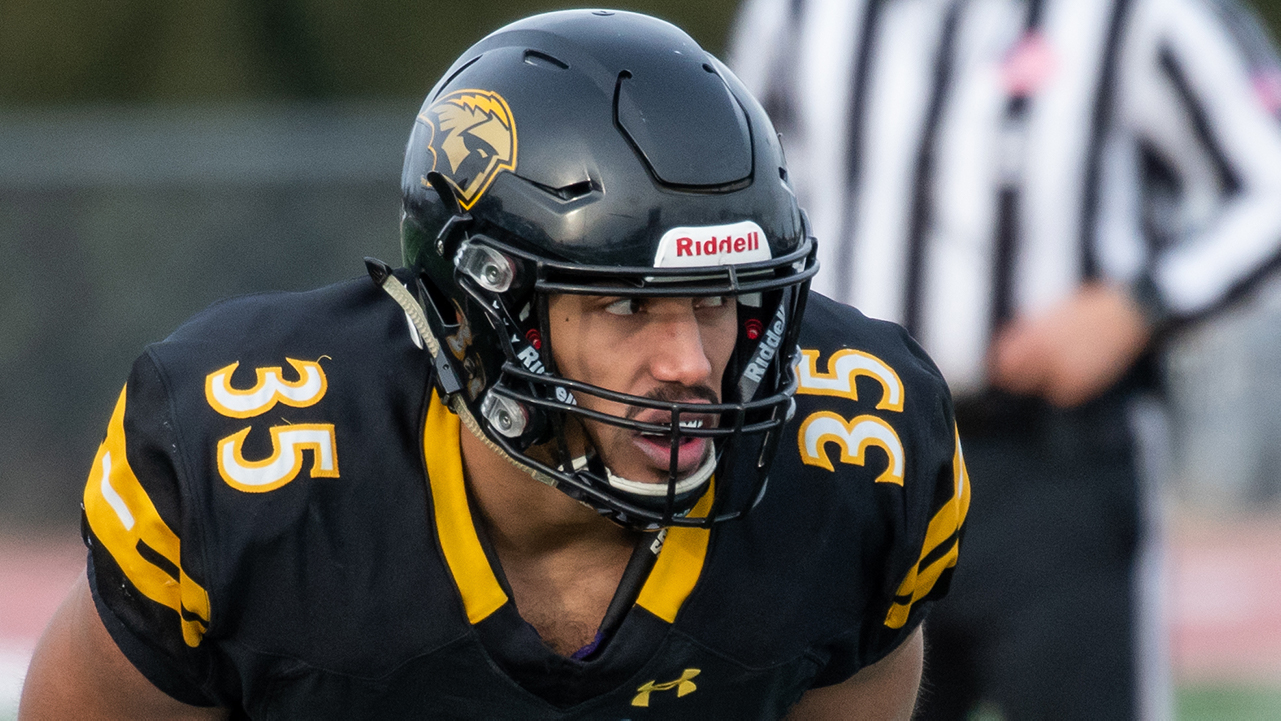 The Titans captured their eighth straight winning season with a 6-4 overall mark. They also placed third in the final WIAC standings with a 4-3 record. 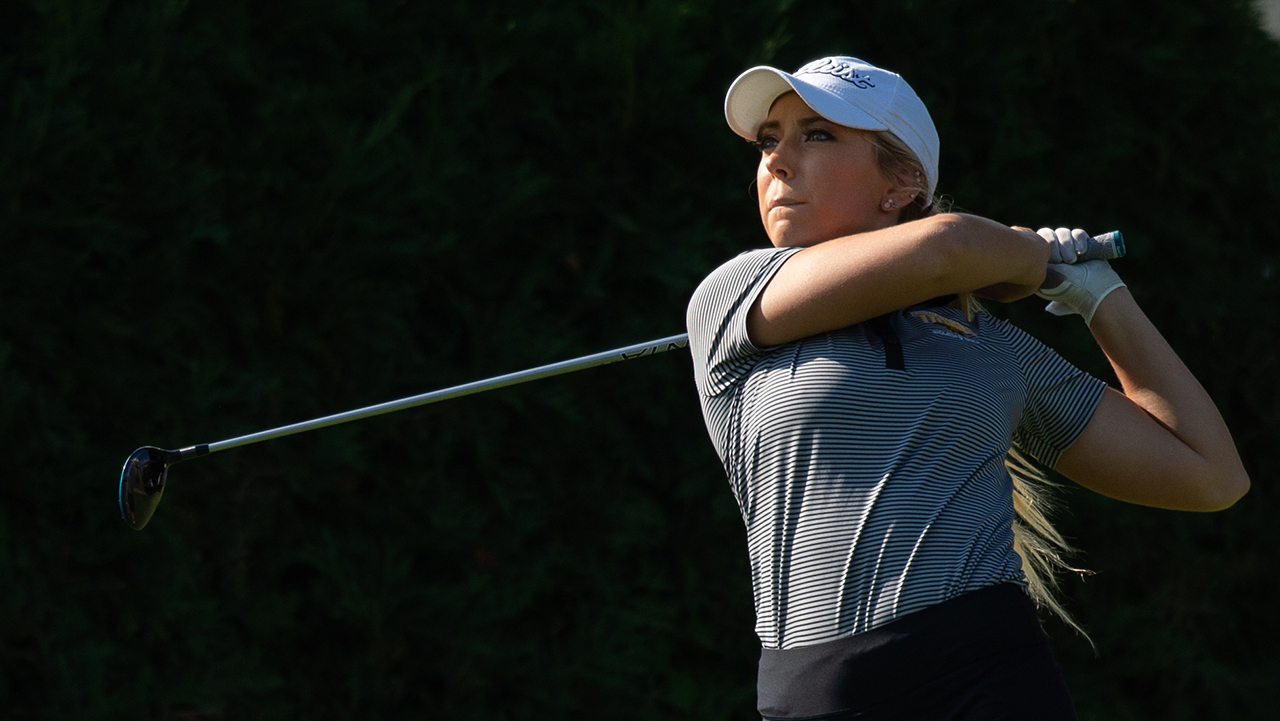 The UW Oshkosh women’s golf team participated in six tournaments during the 2018 fall season, placing in the top three in all but one.

UWO opened the year winning its UW-Oshkosh Titan Classic, setting an 18-hole record with its 316 strokes and the tournament’s 36-hole mark with its 634 strokes. Hannah Braun defended her title, winning the classic for the second year in a row, while teammate Kayla Priebe placed second. The Titans also won the Mad Dawg Invitational with Braun capturing her second individual title of the season.

Braun went on to win the WIAC individual title with a 54-hole score of 228. She became UWO’s fourth WIAC Champion and first since 2015. The Titans had two other golfers finish in the top seven as sisters Kayla and Erika Priebe placed sixth. As a team, the Titans finished the championship in third. 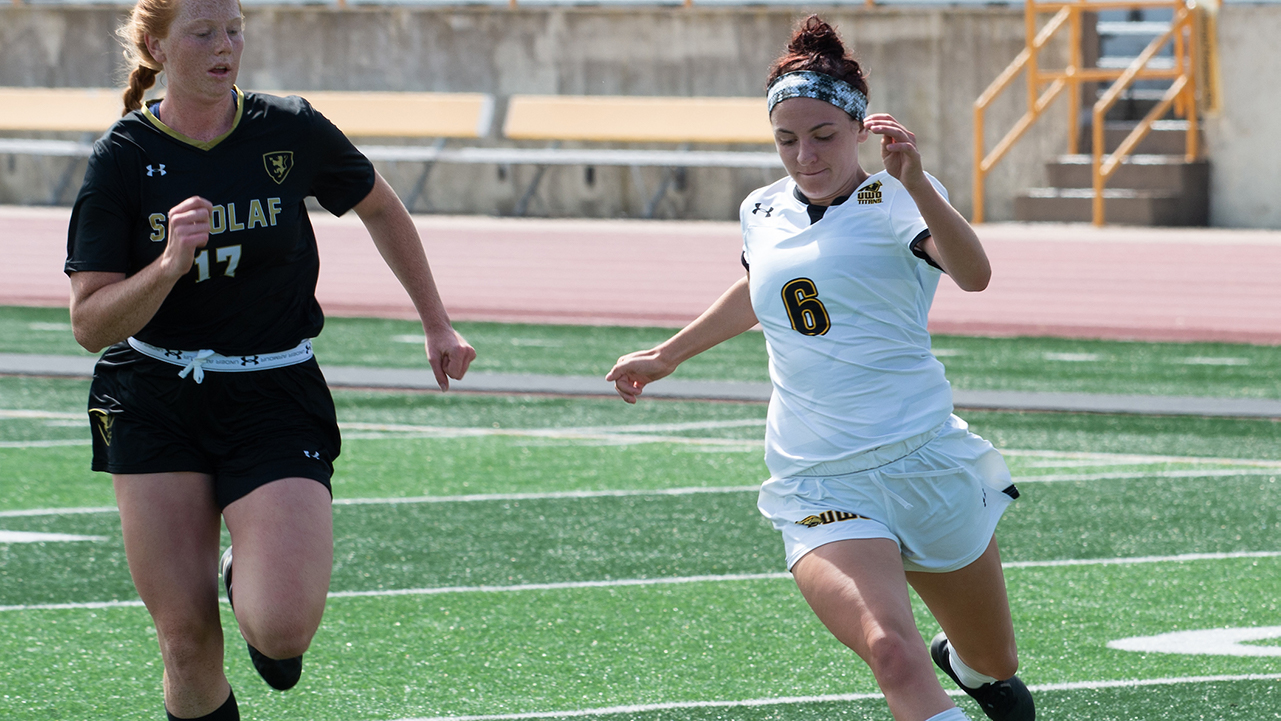 UW Oshkosh finished the 2018 season with a 7-11-1 overall mark and a 3-4 record in the WIAC. The Titans played in the WIAC Championship for the 26th straight season, falling in the opening round to UW-Eau Claire.

Titan sophomores Mallory Knight and Tory Schumann were both named to the 2018 All-WIAC First Team. Knight was one of nine forwards selected to the all-conference squad, while Schumman was one of five defenders to receive all-league recognition. It also was the first all-conference selection for both. Knight led the Titans with seven goals, including three game-winning goals and 16 points. Schumman’s lone goal of the year was a match winner in the 2-0 victory over UW-Whitewater. 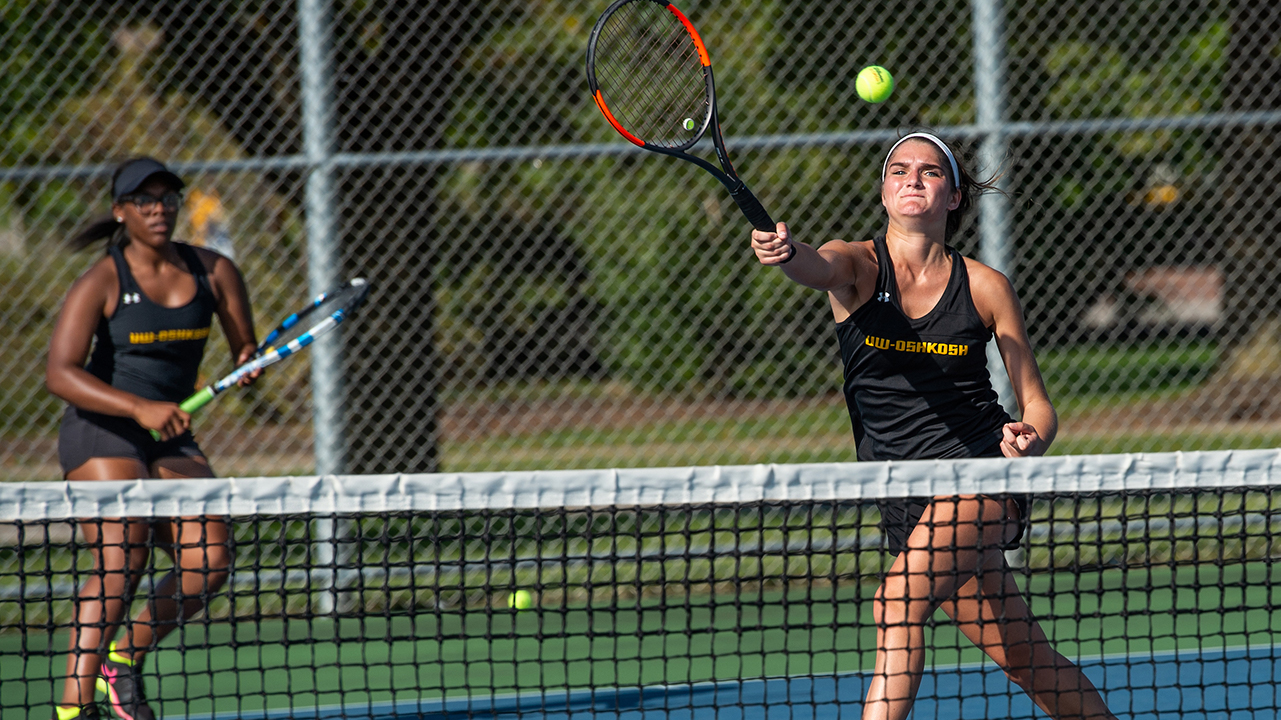 The Titans captured fourth place in the WIAC Women’s Tennis Championship. Michelle Spicer placed third at No. 5 singles, while No. 1 Alyssa Leffler and No. 3 Samantha Koppa finished fourth. At the WIAC Team Tournament, the Titans fell to eventual champion UW-Whitewater in the semifinals.

Leffler and Spicer grabbed WIAC Doubles Athletes of the Week twice during the season. 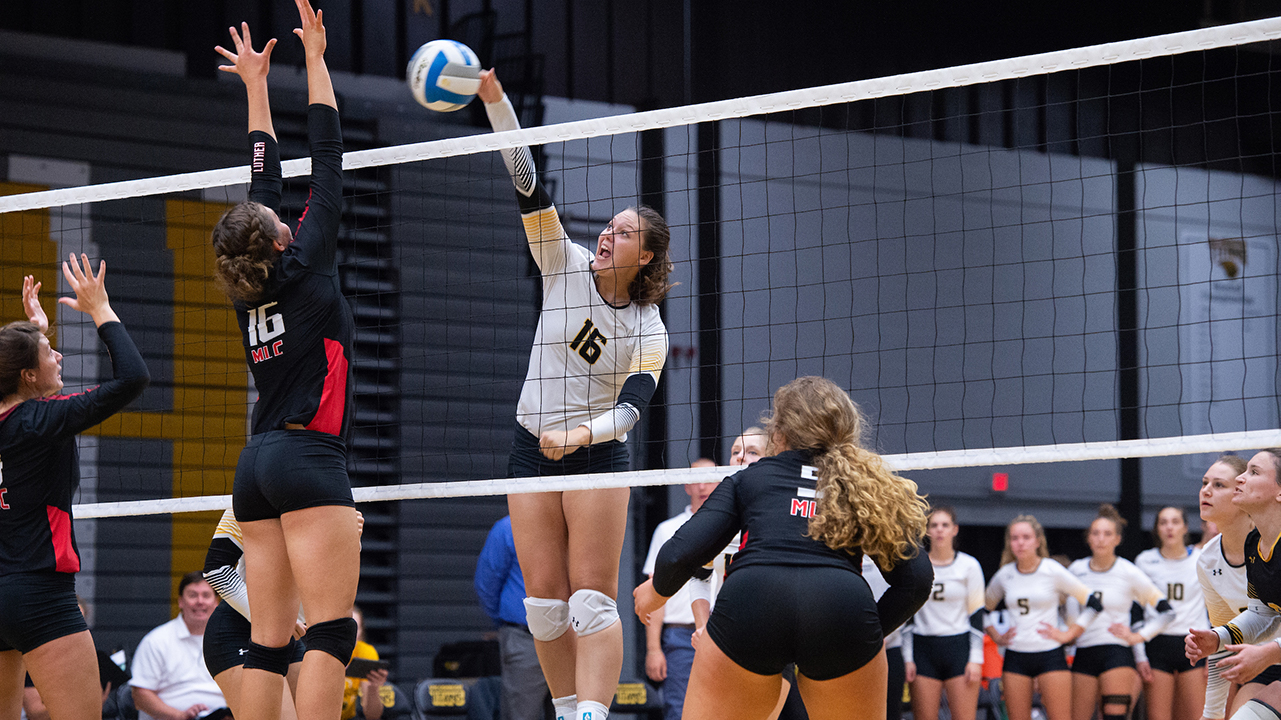 The UW Oshkosh women’s volleyball team closed out the 2018 season with a 17-15 overall mark and a 2-5 record in WIAC play.

The sixth-seed Titans defeated third-seed UW-La Crosse, 3-1, in the opening round of the WIAC Championship. They snapped their six-match losing streak to defending WIAC postseason champion Eagles and became the first sixth seed to win a match in the WIAC Championship since 1997. Their season came to an end in the WIAC semifinals after a 3-1 setback to UW-Whitewater. 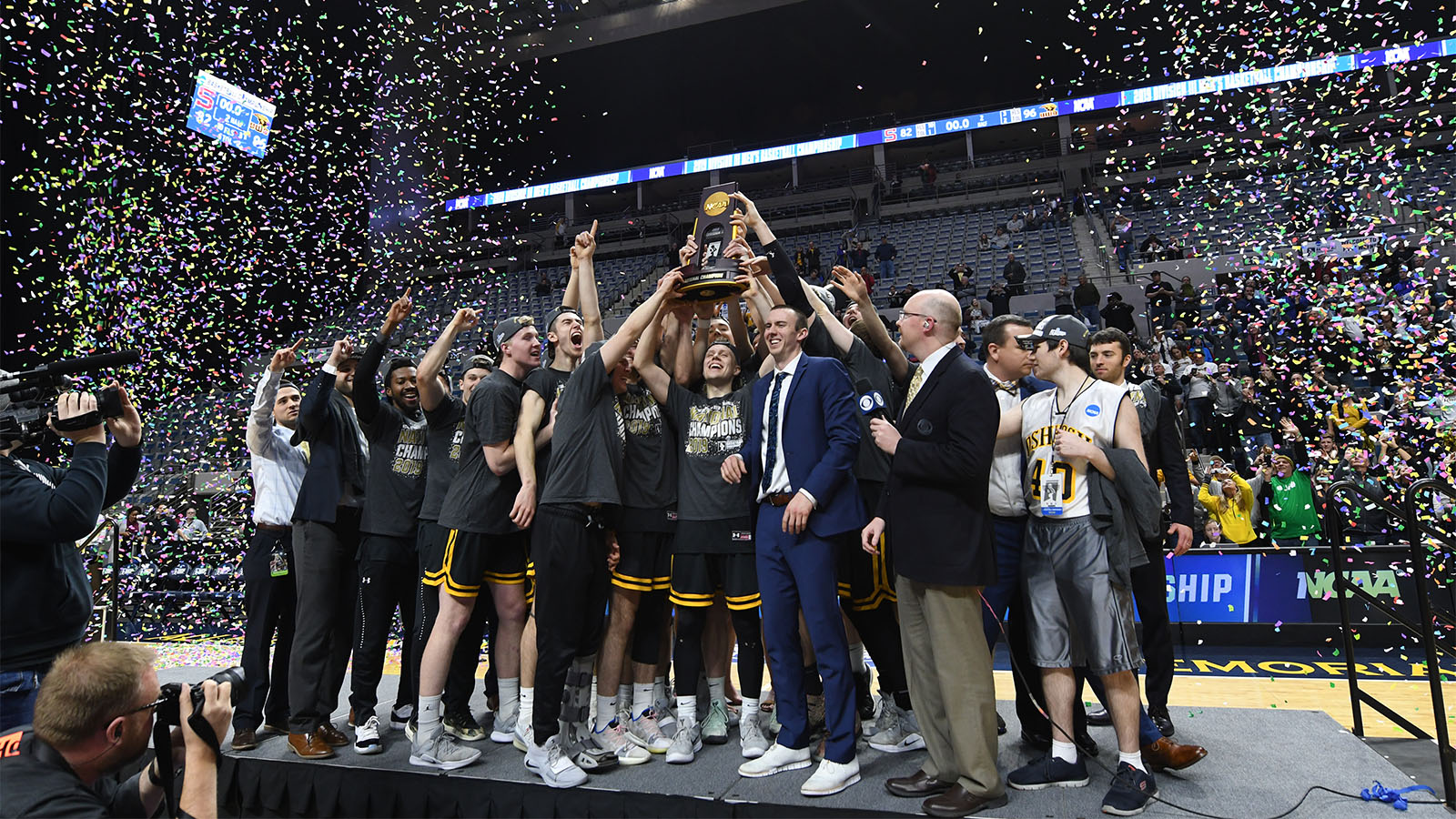 The Titans defeated Swarthmore College, 96-82, in the title game, held in Fort Wayne, Indiana. Dual-sport student-athlete Jack Flynn was named the Most Outstanding Player at the Final Four and scored a career-high 33 points in the championship game.

Then interim first-year head coach Matt Lewis was named the Division III National Coach of the Year after leading the Titans to a 29-3 record, the first outright WIAC regular season title in 41 years, and to the national championship. Lewis was named UWO’s head men’s basketball coach May 1. 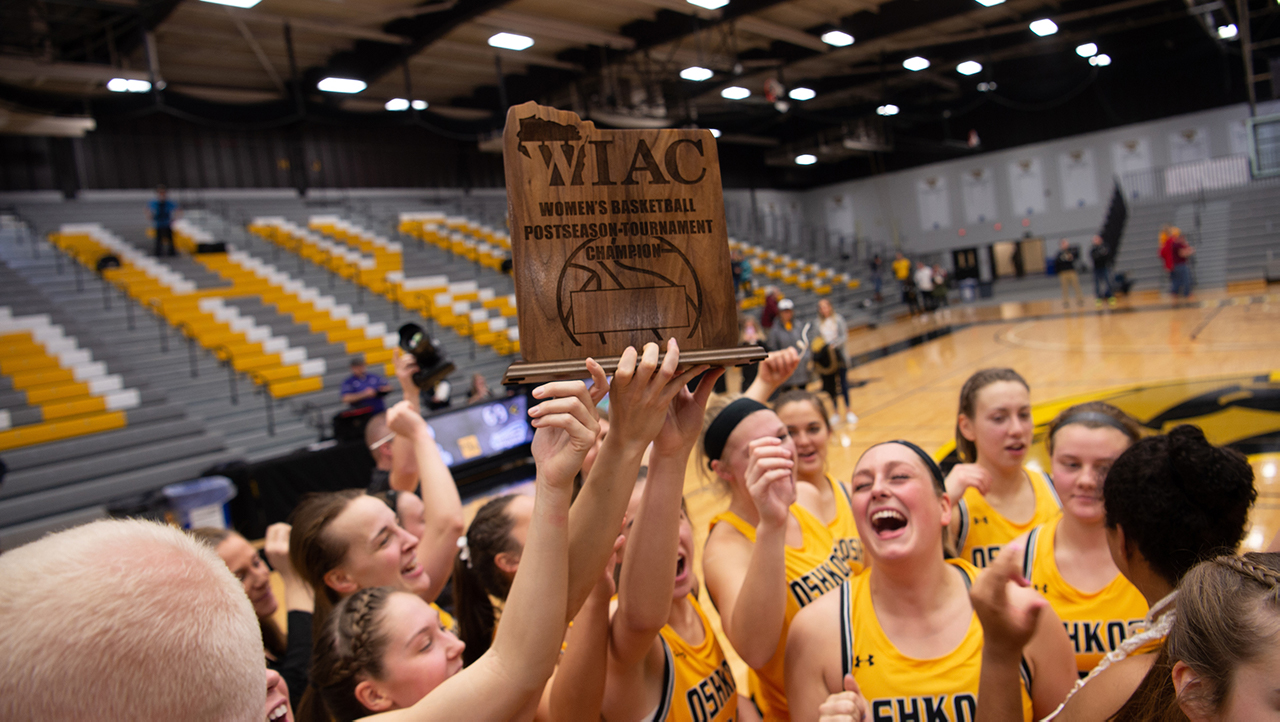 The Titan women’s basketball team closed out the 2018-2019 season at 26-4 overall, marking the seventh straight season in which they won 20 or more games. They also won the WIAC regular season championship with a 12-2 record and the WIAC Tournament Championship with an impressive 69-40 victory over UW-Whitewater.

Isabella Samuels was named All-WIAC First team, Titan head coach Brad Fischer was tabbed the WIAC Coach of the Year, and Chloe Pustina was the co-recipient of the WIAC Judy Kruckman Women’s Basketball Scholar-Athlete of the Year Award. 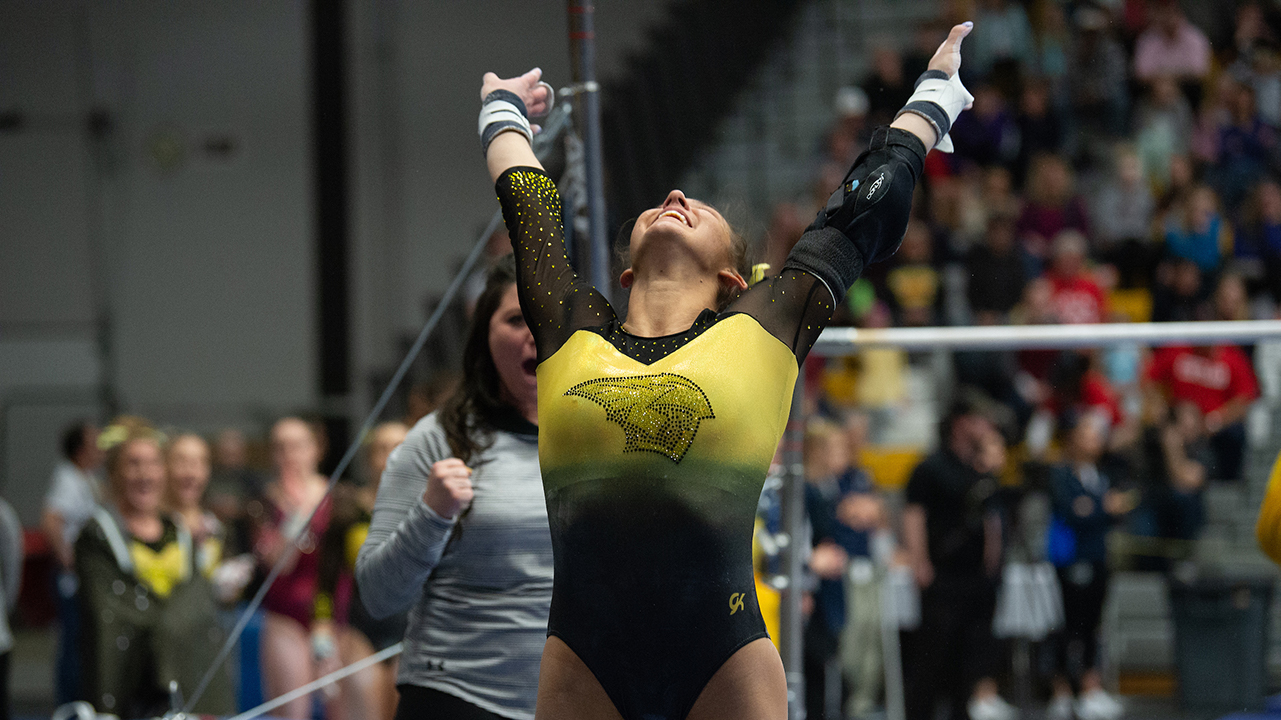 The UWO women’s gymnastics team earned a spot in the NCGA Championship for the first time since 2014. The Titans finished fourth at the championship with a final score of 189.400.

Freshman Emily Gilot earned a pair of All-America awards to lead the Titans at the NCGA Championship. Gilot finished sixth in the floor exercise with a season-best score of 9.725 and eighth in the vault with a score of 9.65. The Titans had four other All-American performances—junior Jessica Bernardo in the all-around competition, freshman Kaira Hammond and junior Baylee Tkaczuk on the uneven bars and freshman Rahdea Jarvis on the vault. Titan head coach Lauren Karnitz was named the 2019 NCGA Coach of the Year.

The Titans earned a spot in the NCGA Championship after placing second at the WIAC Championship/NCGA West Regional. Hammond and Jarvis place second on the balance beam and uneven bars, respectively. 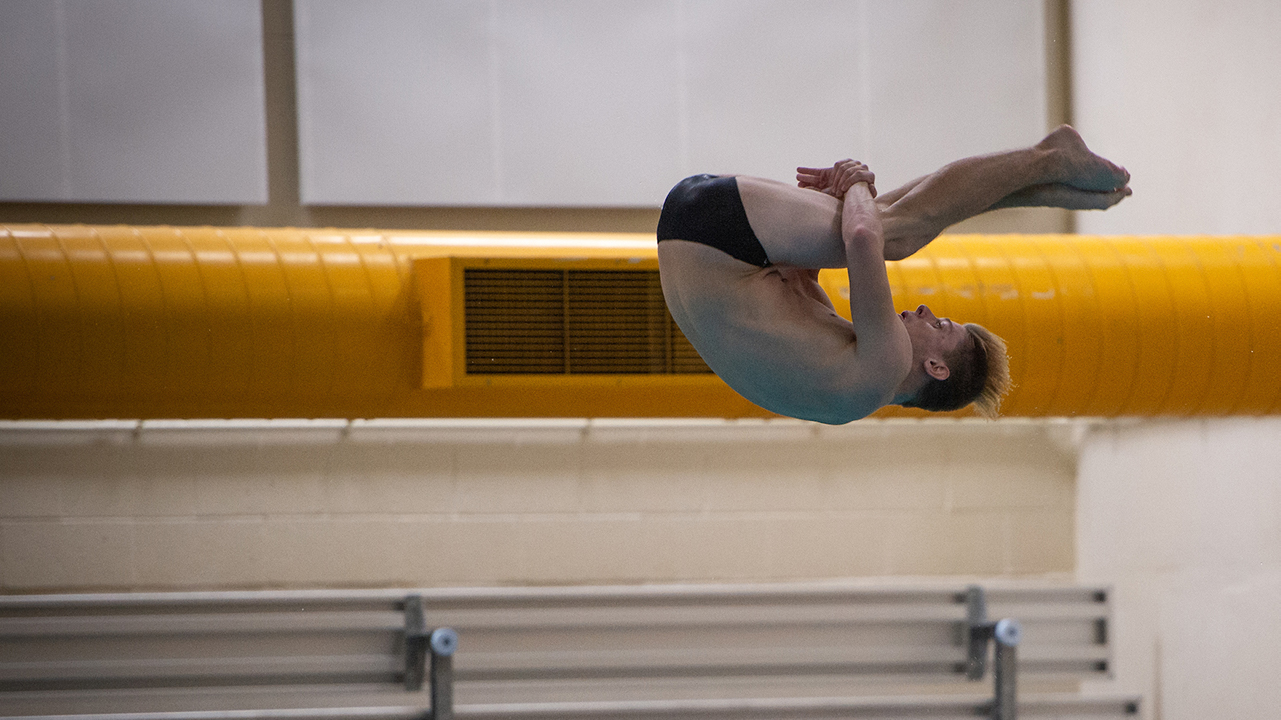 Jarrett Lieder won an event, placed second in another and was involved in seven of the Titans’ eight school-record performances at the WIAC Swimming and Diving Championship. Lieder won the 1,650-yard freestyle and established three individual school records and performed on a trio of record-setting relay squads. David Bain also broke a school record in the preliminary of the 200-yard backstroke.

As a team, the Titans placed fifth at the WIAC Championship. 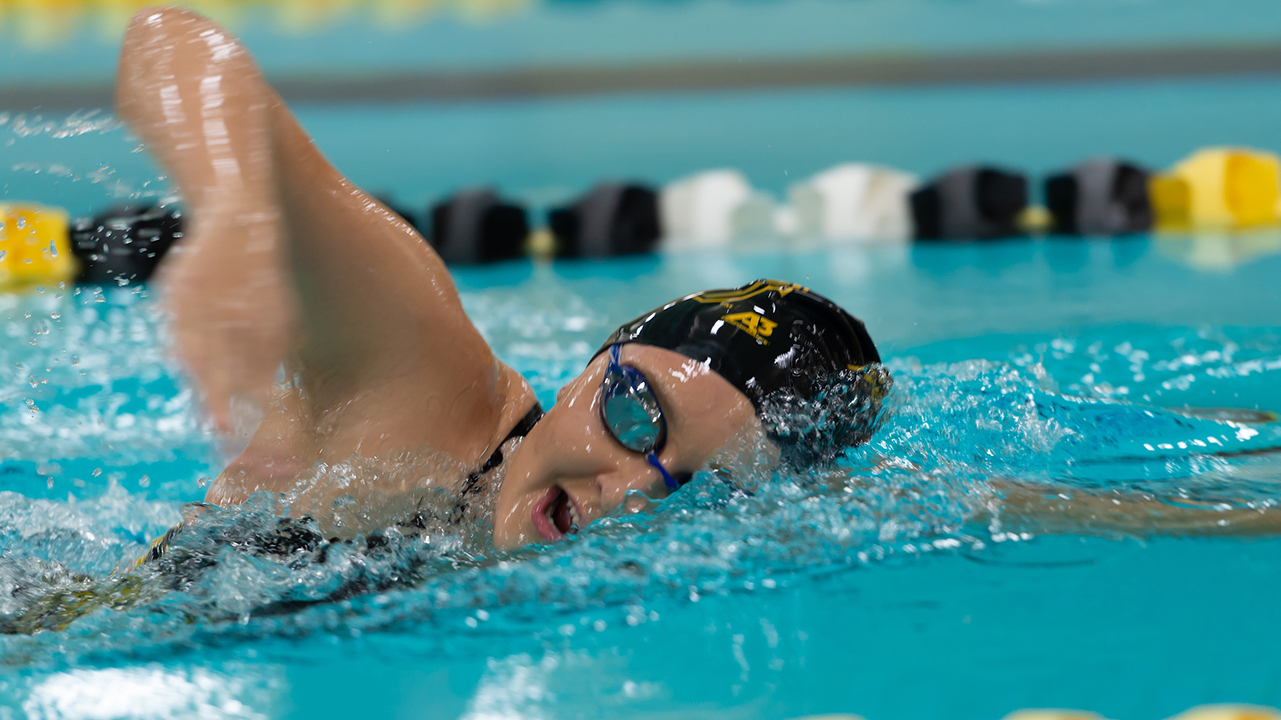 UW Oshkosh’s Sydney Challoner was the runner-up in two events and a fifth-place finisher in another at the WIAC Swimming and Diving Championship. Challoner, who also was involved in three school-record performances, finished second in both the 200-yard butterfly and the 200-yard individual medley with times of 2:10.58 and 2:13.71, respectively, and fifth in the 100-yard butterfly with a swim of 58.81.

Challoner set one UWO individual record with her time in the final of the 100-yard butterfly and another with her time of 2:09.75 in the preliminary of the 200-yard butterfly. She also joined Jennifer Lutz, Alexandra Schuster and Tessa Shorten for a school-record and fifth-place swim of 8:01.76 in the 800-yard freestyle relay.

As a team, UWO finished the championship in fifth place. 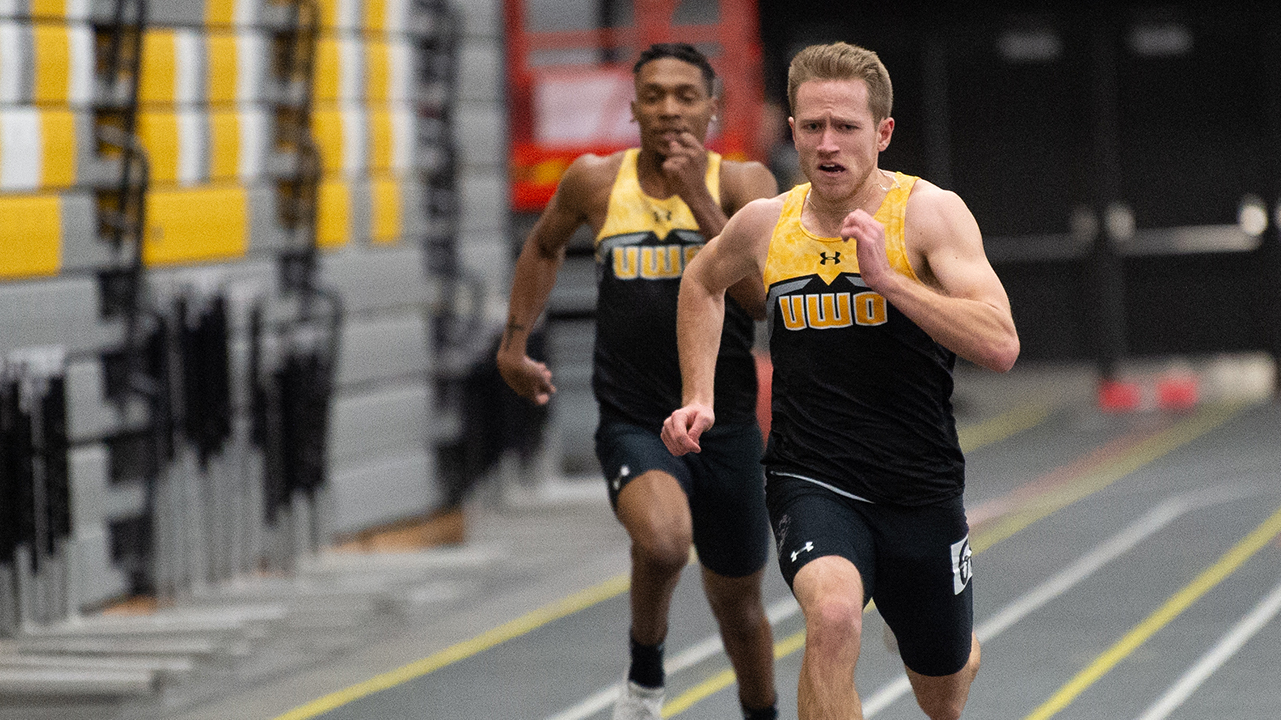 Ryan Powers ran to two victories and Jonathan Wilburn jumped to another win to propel the Titans to a second-place finish at the WIAC Men’s Indoor Track and Field Championship. Powers won both the 200-meter dash and 400-meter run in times of 21.88 and 48.20 seconds, respectively. His performance in the 400-meter run established WIAC and UWO records. Wilburn won the triple jump with a leap of 48-8 3/4,

Powers went on to claim two All-America awards, and Robert Ogbuli and Wilburn added All-American performances as the Titans finished ninth at the NCAA Division III Indoor Track and Field Championship. Powers placed third in the 400-meter in school record time of 47.80 and took sixth in the 200-meter dash to become the program’s first All-American in the event.

Ogbuli and Wilburn each earned All-American honors with fifth-place efforts in the 60-meter dash and the triple jump, respectively.

Powers also was named the Track Performer of the Meet at the WIAC Championship and was tabbed the 2019 NCAA Division III Midwest Region Track Athlete of the Year by U.S. Track and Field Cross Country Coaches Association. 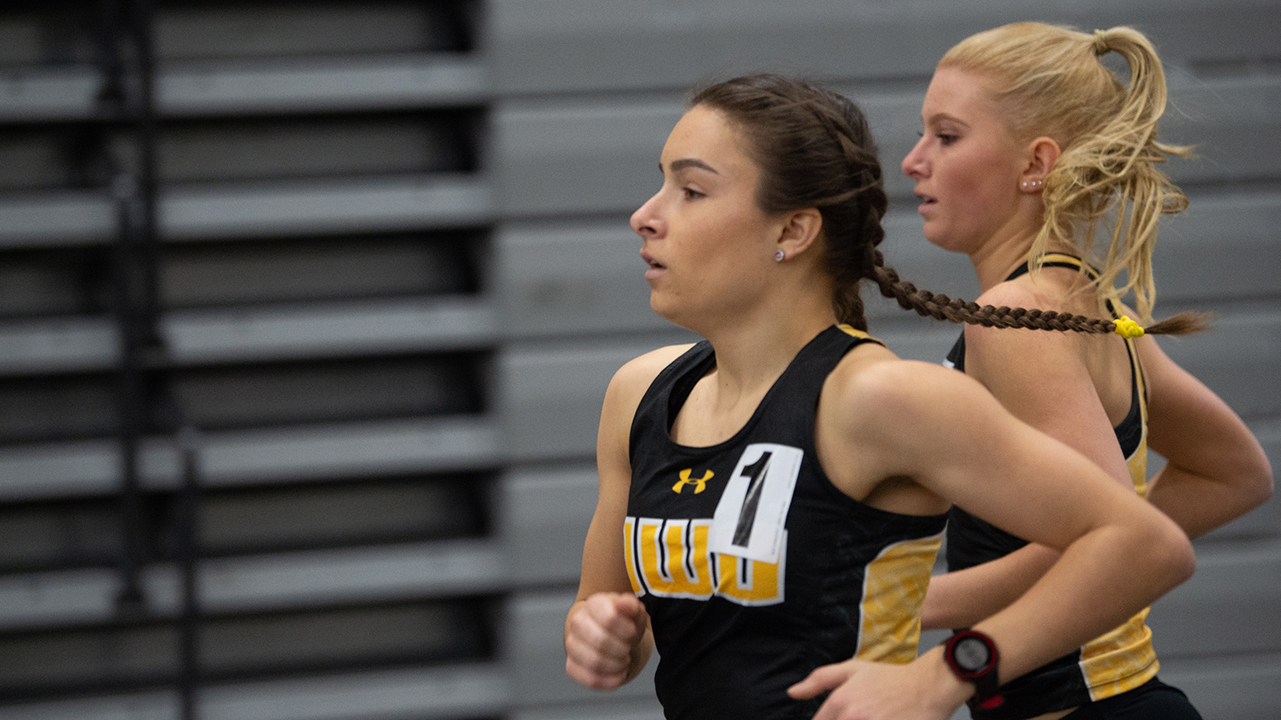 Lauren Wrensch won both the long jump and 400-meter run while Cheyenne Moore captured first place in the 3,000-meter run as the Titans finished fourth among eight teams at the WIAC Women’s Indoor Track and Field Championship.

Wrensch and Moore then garnered All-America honors at the NCAA Division III Women’s Indoor Track and Field Championship. Wrensch finished third in the long jump at the national meet with a distance of 18-11 3/4, while Moore placed sixth in the 5,000-meter run with a time of 16:50.79 to become an indoor All-American for the first time.

UW Oshkosh, which owns a Division III-record nine national titles, finished 27th in the team standings with nine points. The Titans have now scored at least three points at each of the past 34 national meets. 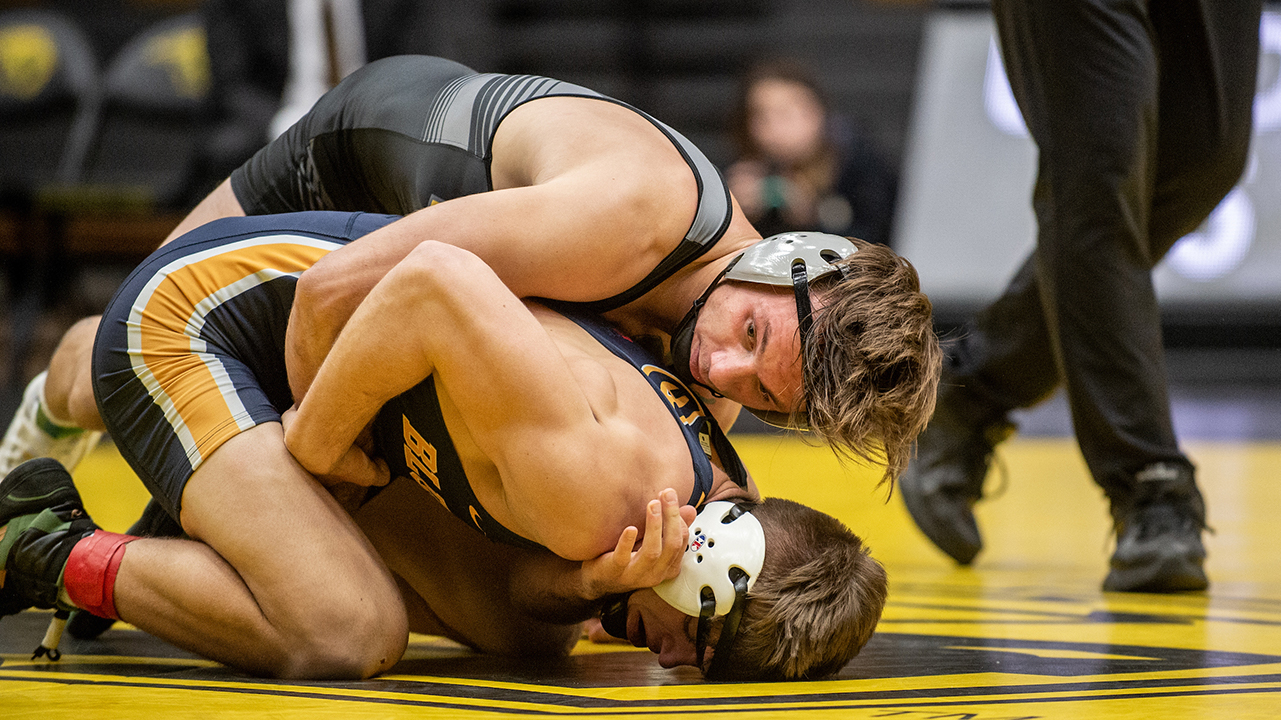 Mark Choinski capped his decorated career with a third consecutive All-America performance at the NCAA Division III Championship with a third-place performance. Choinski reached the quarterfinal round in the 165-pound weight class with three victories. After suffering a loss in the quarterfinals, Choinski won three straight matches against seeded opponents to finish in third, marking the best national championship result of his career.

The Titans used second-place results from Choinski, AJ Schoenfuss and Beau Yineman and third-place listings from Ben Kitslaar and Jordan Lemcke to finish fourth at the WIAC Championship. 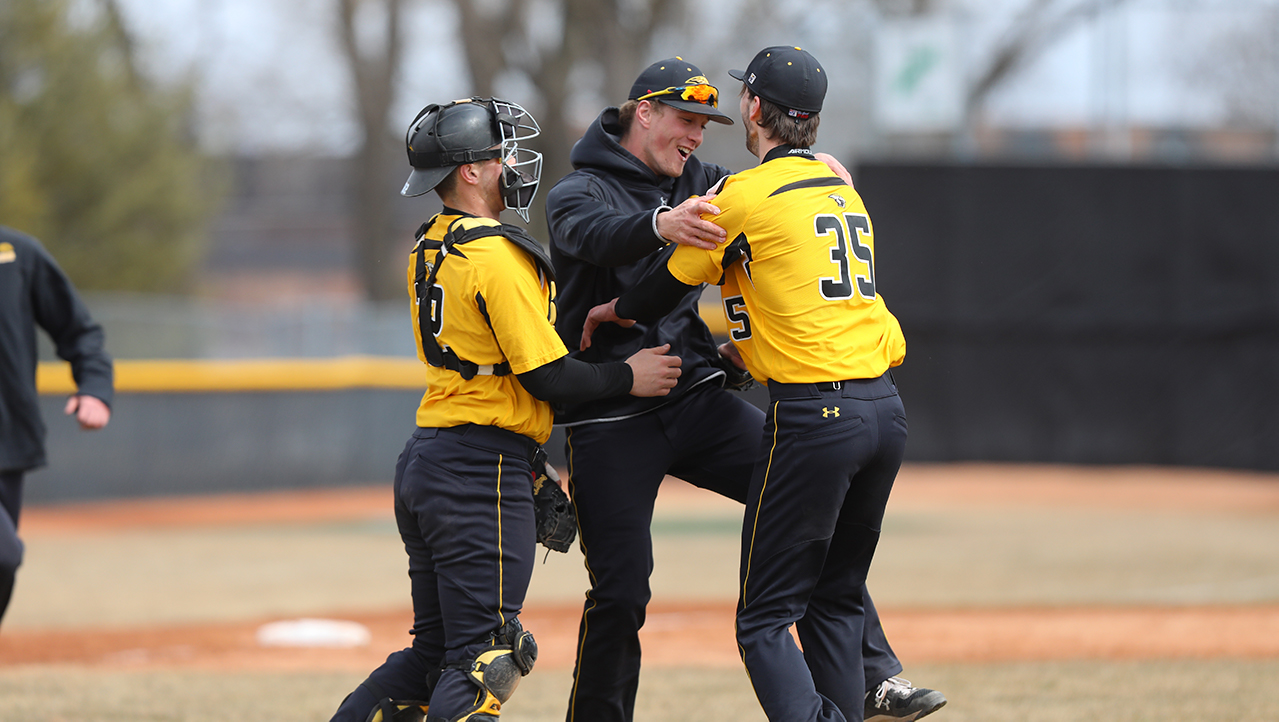 UW Oshkosh finished the 2019 season with an 18-21 overall mark and an 11-13 record in the WIAC. The Titans strung together a nine-game win streak during non-conference action, not dropping a game from March 16 through March 31.

Pitcher Chris Atwood registered the 10th no-hitter in UWO baseball program history during the Titans’ doubleheader sweep of Finlandia University on March 31. Atwood threw only 88 pitches, retired 27 of the 29 batters he faced. He struck out a career-high 13 batters, including two in the first, second, eighth and ninth innings, as he recorded his first complete-game performance in six career starts. The no-hitter was UWO’s first since March 12, 1995. 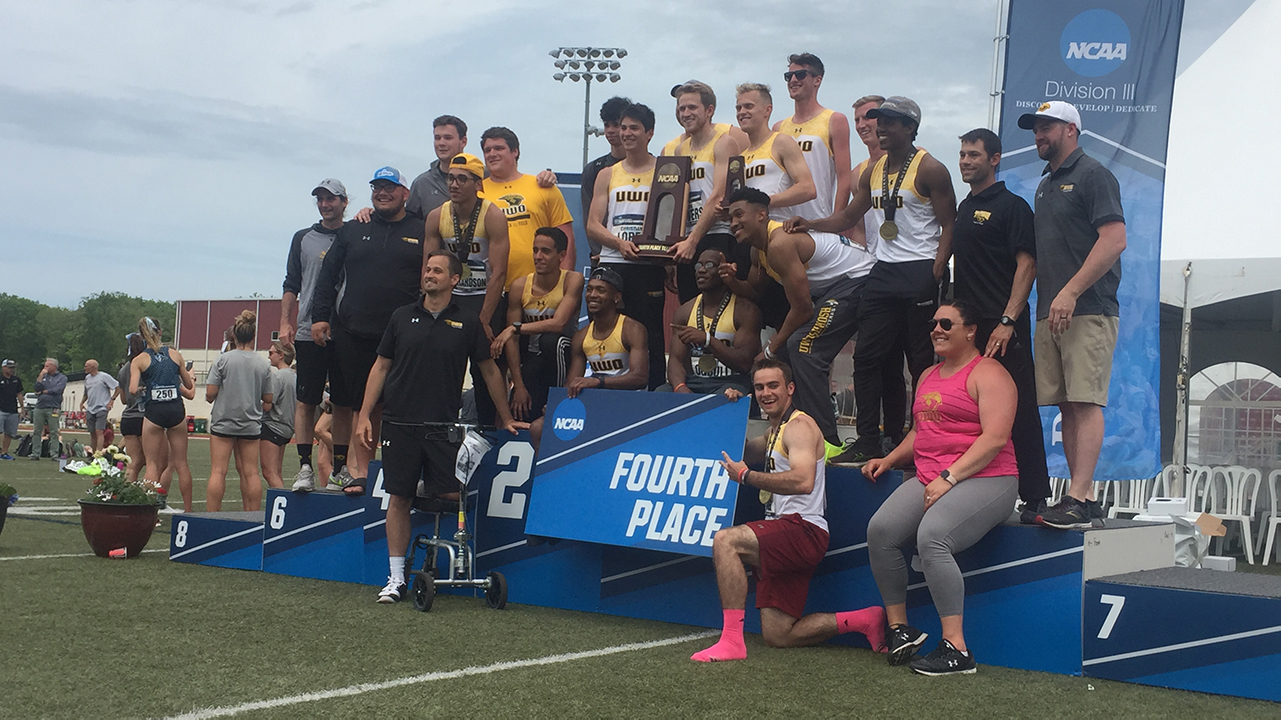 UW Oshkosh used six All-America performances to finish fourth at the NCAA Division III Men’s Outdoor Track and Field Championship. The Titans captured the 2019 NCAA outdoor title by scoring 32 points en route to their highest finish at the championship since 2014.

UWO received All-America efforts from Johnathan Wilburn in the triple jump, Ryan Powers in the 400-meter run, Jack Flynn in the discus, Joe Vils in the pole vault, Jackson Sheckler in the shot put and the 400-meter relay team of Benjamin Jung, Christian Lopez, Aaron McCarroll-Richardson and Robert Ogbuli. 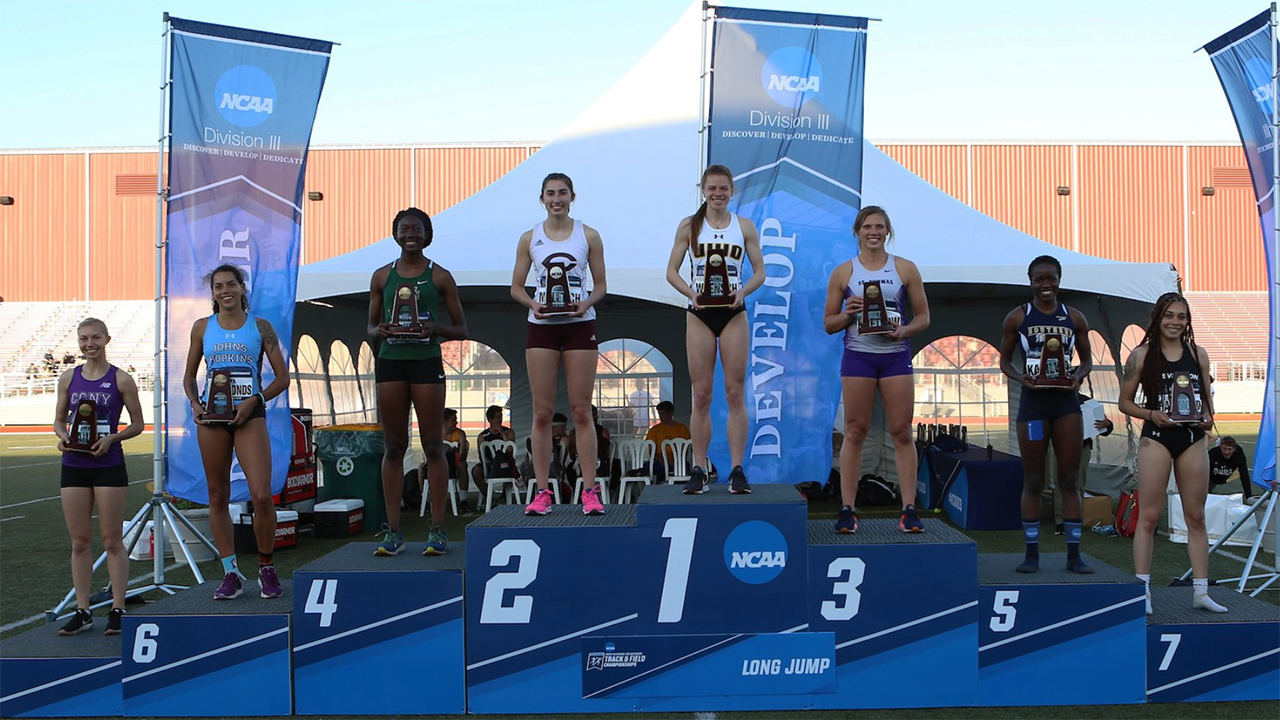 Lauren Wrensch became the 50th national outdoor champion when she won the long jump with a school-record performance at the NCAA Division III Track and Field Championship. Wrensch marked her momentous measurement of 19-11 on the third of her six jumps. She defeated 21 other contestants in the event. She also finished 12th in the 400-meter run and 16th as a member of the Titans’ 1,600-meter relay team.

Isabella Samuels placed 12th in the shot put with a measurement of 46-8.

The Titans placed fourth at the WIAC Championship. Wrensch led the way, winning both the long jump and the 400-meter run. Samuels earned the runner-up finish in the shot put for the second straight season with her measurement of 45-9. 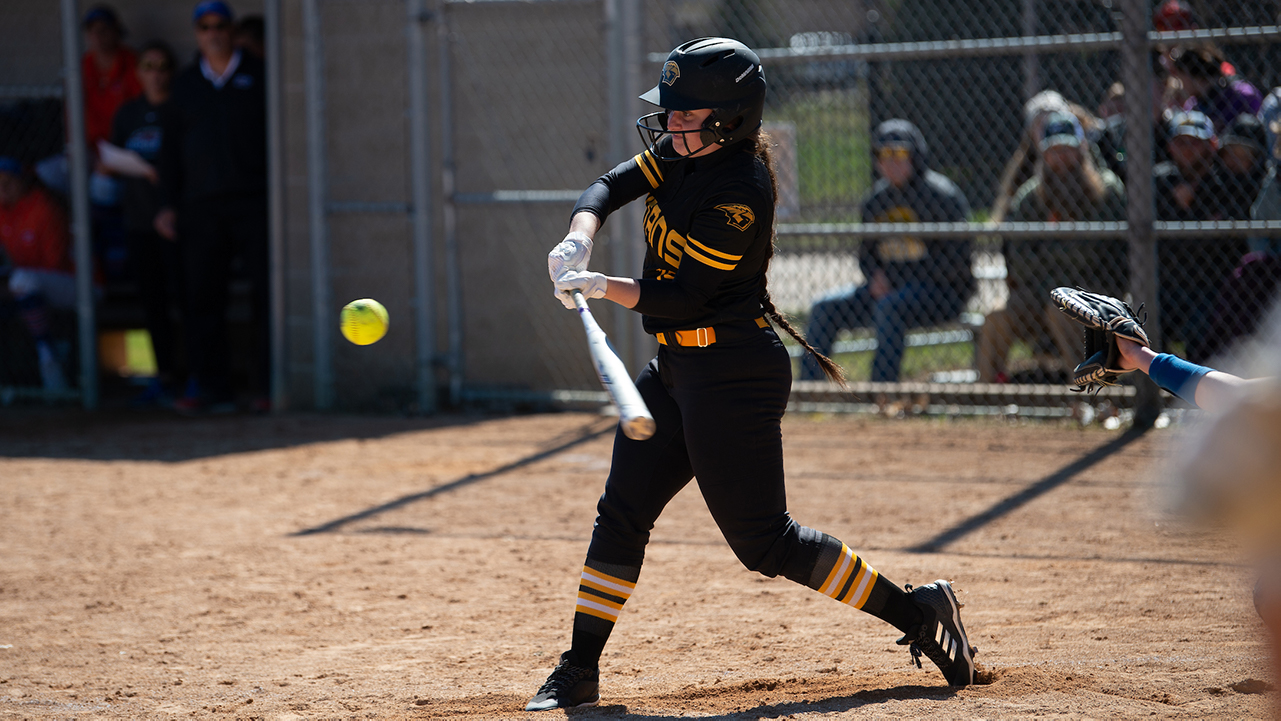 Menting capped off a stellar career by being named to the CoSIDA Google Cloud Academic All-America Second Team.