Just a short few months after winning the NCAA Division III National Championship, the University of Wisconsin Oshkosh men’s basketball team traveled to Spain. The Titans last took a summer trip to Italy in 2016, and the team is planning to travel to Prague and Budapest in 2022.

This year’s trip to Spain included both basketball games and exploring the Spanish culture. The Titans played three games against Spanish semi-professional teams and explored both Madrid and Barcelona.

UWO student-athletes Thomas Borta, of Wausau, and Connor Duax, of Dubuque, Iowa, took time to write about their experiences during the trip. 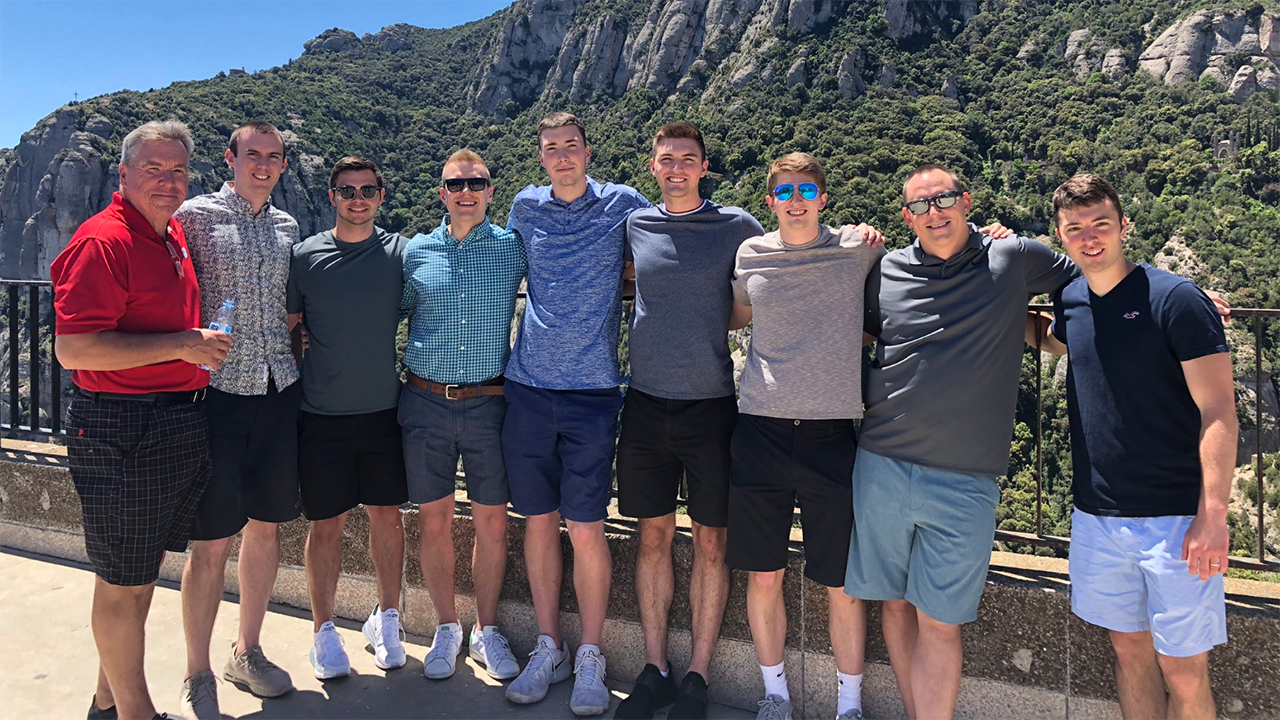 This May, the Titan basketball family took over 50 people on a trip to Spain. The very anticipated trip lived up to all expectations. All of the players, family members and coaches were amazed by the Spanish culture.

The first stop on the trip was Madrid. After a long international flight, many of the Titan basketball players were anxious to get outside and explore the city. During the unofficial tour, some of us walked through Parque de Retiro, a 350-acre park in the middle of Madrid. A few of the guys even rented row boats for the giant pond in the park.

The next day in Madrid, we went on a full city tour of Madrid and saw some spectacular places. One of the first stops on the tour was Las Ventas, the bullfighting arena in Madrid. The arena is almost 100 years old and holds bull fights almost daily.

The next stop was Santiago Bernabeu Stadium, the home of Real Madrid. While we were there, Madrid was preparing for the Champions League Final and it was really cool to see how big that event is for them. It was like walking around at the Super Bowl.

The last stop on the tour was Plaza Mayor, which is Madrid’s vibrant main square in the heart of the city. We were able to see the Cybele Palace and walk around and shop in one of the most historic cities in Europe.

Our last day in Madrid was actually spent in a city about an hour away called Toledo. I loved touring Toledo because the architecture was very unique and different from what I’m used to seeing. Toledo is one of the oldest cities in Spain and the architecture reflected the age of the city. There were many small, winding roads made of mostly brick and old buildings carved into the hillside. Walking up the hills was a pain but the views at the top were incredible. 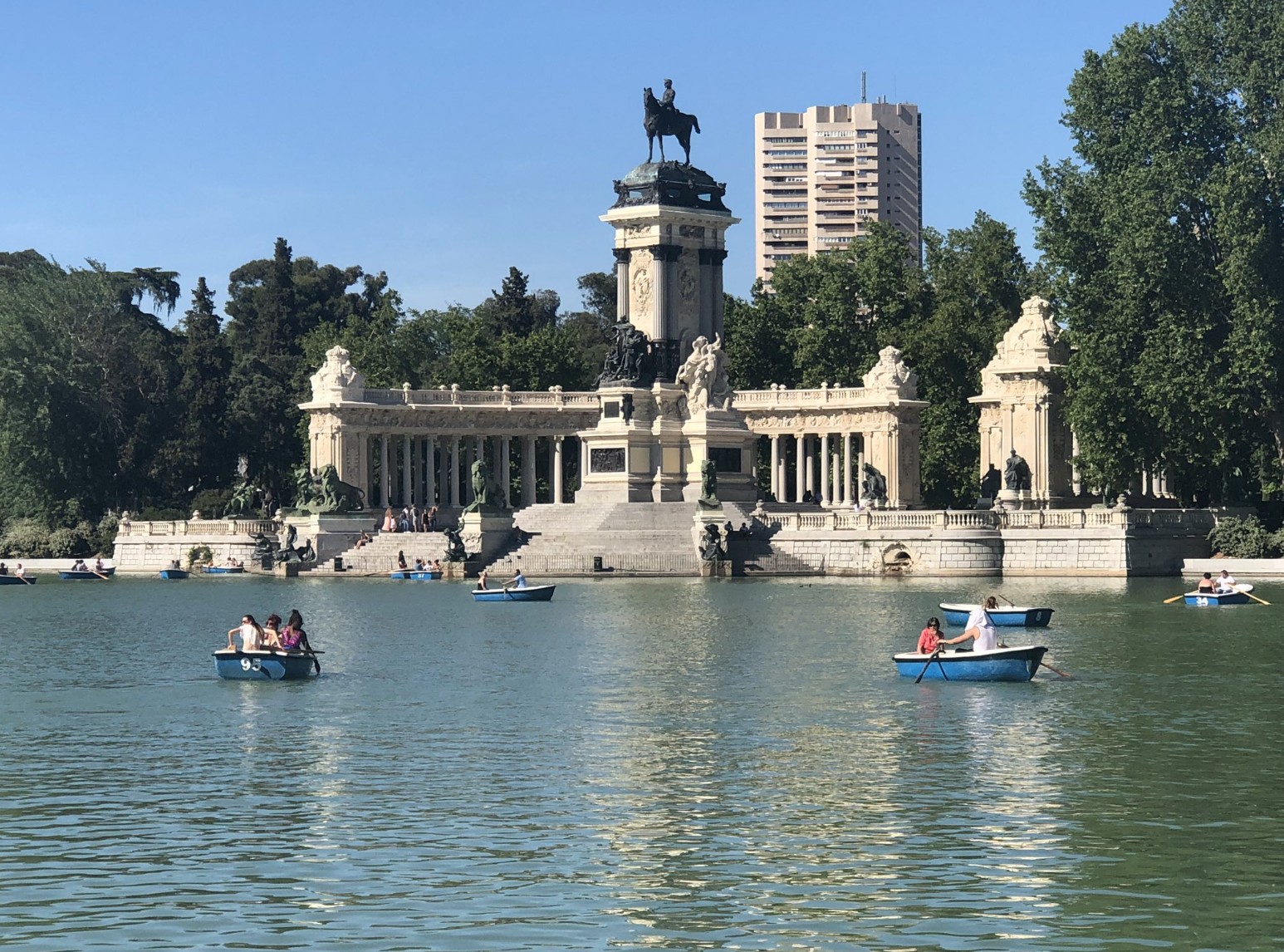 After our nine-hour bus ride from Madrid to Barcelona, we arrived late afternoon and had time to just relax and take time for ourselves to prepare for the long days ahead. On that arrival day, many of us spent an hour or two exploring the area around our hotel. There were many little shops nearby; as well as a convenience store, a casino and the famous Temple Expiatori de la Sagrada Família.

The next morning, we all gathered on the bus to make the trip up to Montserrat, which is a multi-peaked mountain range, home of a very sacred monastery. Upon arriving at this location, I couldn’t believe my eyes. The monastery was beautiful beyond description, overlooking thousands of miles. It just baffles me how these monks spend their everyday lives up in the mountains. We were told the story of how their living destination is the cause of the Black Madonna, which is an immovable statue the monks found many years ago. We spent most of the day here, walking along the mountain trails and exploring the enormous home of the monks.

The next morning we all gathered on the bus once again for the city tour of Barcelona. This took about four hours, and we all came out with a very good idea of what Barcelona consisted of. We saw the famous statue of Christopher Columbus, where the Olympics were held, where the famous beach was located, and the famous castles that housed royalty. We had free time for lunch, so many of us used the additional time to walk around the city, exploring nice little cafes and restaurants to sit down at. That night we had our basketball game so that was the end of our busiest day in Barcelona.

We were all anxious for this next day. Given the option, we had the chance to walk through the Sagrada Família. Looking from the outside, I wouldn’t understand anyone who wouldn’t want to see the views from inside. We walked from our hotel, and upon arrival, it took about 20 minutes to go through the line to get inside. It was indescribable. With teammate Eric Peterson, of Batavia, Illinois, providing the pictures, I hope you get a feel for what it was like. Looking straight up, and moving in a circle, I couldn’t believe my eyes. It didn’t make any sense to me as how individuals can create what I was looking at with their own hands. I spent about 45 minutes inside this church, trying to take it all in. With our final basketball game that night, this was a great ending to our trip in Barcelona.

Making our way back to the states the next morning, I wondered to myself if I would ever get the opportunity to travel here again.