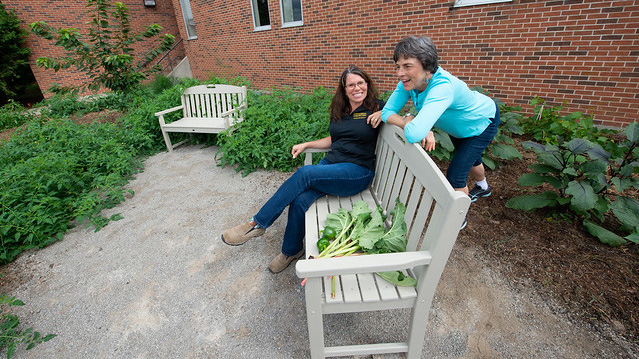 Eggplant, cucumbers, berries and tomatoes are among the payoff from a garden planted months ago in a patch of land behind the College of Education and Human Services building at the University of Wisconsin Oshkosh.

MaryBeth Petesch, field experience director and certifying officer for teachers, requested that something be done with the space that borders Parking Lot 25 on campus.

“My plan was to have a picnic table so I can sit out there with my lunch,” Petesch recalled. “I’m thankful. I didn’t know it was going to be edible landscaping.”

Petesch was thrilled to take a look around the garden recently after several grounds staff, including gardener Tony Arellano, worked all morning to pull weeds at the site.

She said the garden added visual appeal and a conversation point to a previously unused area.

Two years ago, a pair of cherry trees were planted, replacing an older crab apple tree that was cracked and rotten.

During Earth Week last spring, about 20 of associate lecturer of biology and sustainability coordinator Brad Spanbauer’s students worked at the site. The area was covered with cardboard. Mushroom compost and wheat straw were layered onto the area in a “lasagna” gardening method.

Asparagus, grapes and rhubarb were planted next. A pair of Trex-manufactured benches that were placed at the site were won for significant effort by the campus community to recycle plastic bags and film.

The success of the plot behind College of Education and Human Services prompted staff at the Student Success Center to request help with a similar space at the front of their building. 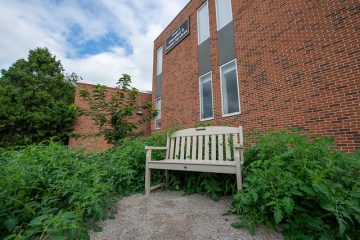 Mick said she strives for sustainable landscapes that contain perennials, purposeful plantings and fruit trees. Her goal is for the Oshkosh campus grounds to be chemical-free by 2021.

She considers that students will lay on the grass and people walk across it.

“I don’t want them going through chemicals,” she said.

Insecticides and fungicides are no longer used at UW Oshkosh; herbicide use is greatly reduced.

A commitment to avoid chemicals means the grounds staff must get creative to keep up with the University landscape.

“It’s a real balancing act,” Mick said about the desire to keep campus looking attractive. “Some of the people coming in might see a dandelion and think we’re being lazy. We don’t want to spray that much. If we build up the strength of the soil, grass is more able to combat weeds.”

Mick said she doesn’t mind some weeds. Milkweed, for instance, is rarely removed from any location on campus.

There have been an “amazing” number of monarch caterpillars seen on campus this year, munching away on milkweed leaves, she said.

Although dandelions always seem to create a great deal of angst, “they are literally the first food source for the pollinators in the spring,” she added.