A University of Wisconsin Oshkosh alumnus who responded to storm recovery operations in northern Wisconsin with the Wisconsin National Guard, was among 150 recognized recently for their efforts. 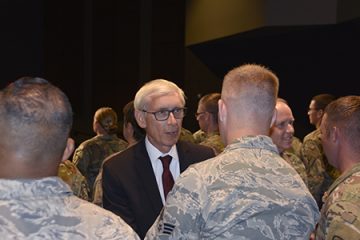 “We worked 10-hour days, seven days a week,” said 2nd Lt. Isaac Geffers of Larsen, ’18 LS, who served as leader of one of the debris removal teams. “We did a lot of debris pickup, hauling dump loads, a lot of chipping of debris on the roadway. We cleared roads for emergency vehicle access and ensure they could be snowplowed this winter.”

The Soldiers and Airmen were honored at a ceremony at Balsam Lake’s Unity High School with the Wisconsin Emergency Service Ribbon for their debris removal efforts in Polk, Langlade and Barron counties.

“The state has this wonderful arrow in its quiver that is an expansion of capability in a time of need,” Maj. Gen. Don Dunbar, Wisconsin’s adjutant general, said during the ceremony. “That arrow is the 10,000 Soldiers and Airmen of the Wisconsin National Guard.

“When needed, we come out and assist, but we never are in charge,” Dunbar continued. “We are always working with the sheriff or the incident commander.” 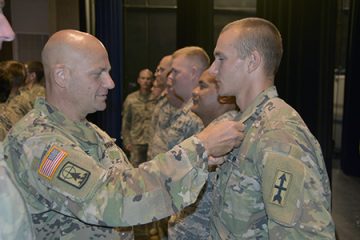 Geffers said there were positive interactions with community members who thanked them for what they were doing.

“We are glad we were making an impact,” he said.

Geffers has been in the National Guard for six years and was part of the Reserve Officers’ Training Corps (ROTC) at UW Oshkosh. He is a platoon leader with A Company 173rd Engineers in Tomahawk. Since graduation, he has worked as a market sales support specialist with Georgia Pacific in Green Bay.

A powerful storm July 19-20 downed thousands of trees on more than 50 miles of road in northern Wisconsin and left nearly 100,000 residents without power.

Evers commended the Soldiers and Airmen for staying positive and focused on accomplishing their mission to help the communities impacted by the storms.