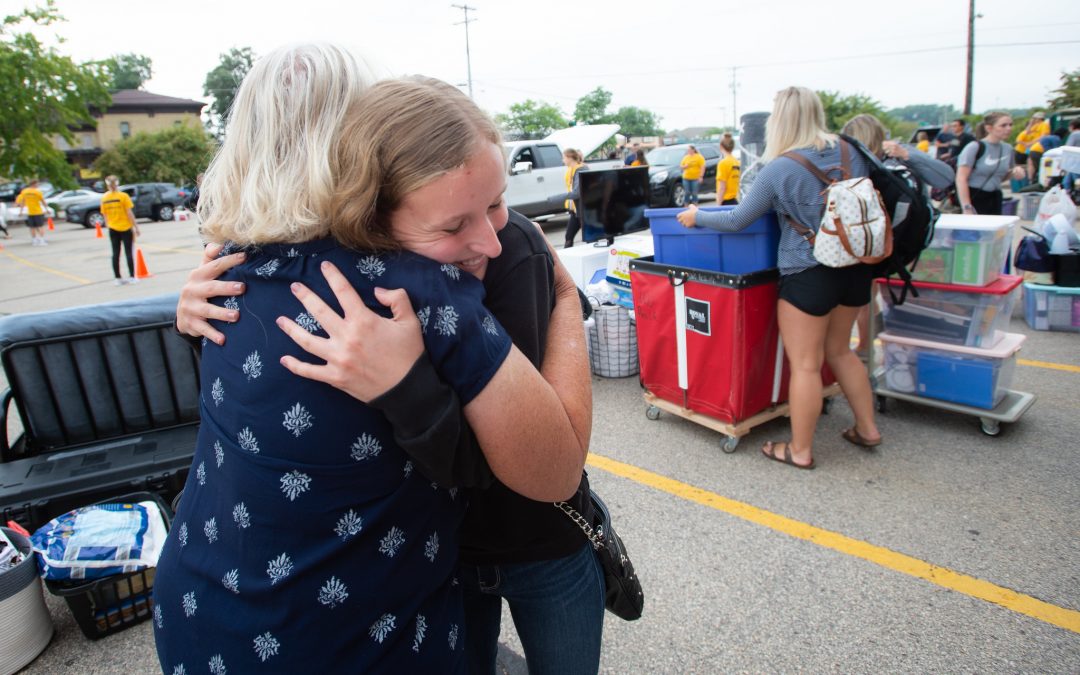 Excitement, jitters and a tinge of emotion were evident as first-year students moved in Sunday at the University of Wisconsin Oshkosh.

After hauling clothes, pillows, snacks and decorations, parents gave their final hugs to children ready to embark on their first year of college at the Oshkosh campus. 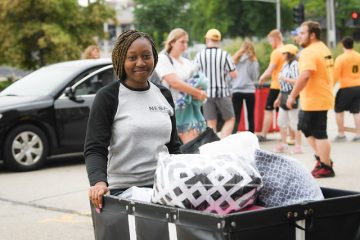 “She’s my only child,” said Tracy Hinzpeter, about 18-year-old daughter Paige, who was moving into Taylor Hall. “I’m happy and proud of her. I’m not scared of her being here. It’s more about what am I going to do with my time?”

A native of West Allis, Paige intends to pursue a degree in nursing. After visiting campus during a Titan Preview, she decided UWO was the only place she wanted to apply.

“I was sad yesterday,” Paige said about leaving for college. “Today it feels like I’m on vacation—it hasn’t hit yet.”

Her mom, stepmom, dad and two grandmas were helping her move in.

About 3,000 students moved into 10 residence halls at UW Oshkosh over Labor Day weekend. Besides student volunteers, faculty and staff were on hand to ensure a streamlined move-in process that was lauded by parents.

“Everyone seems really excited to be here,” he said.

Daniel Proudfoot, a second-year biology student from West Bend, was a move-in day volunteer. As a MiTitan, he was allowed to move in a few days early. He said he packed quickly the night before: bringing a futon, clothes, electronics, sports equipment and “lots of food.”

He said he is eager to start the new school year. 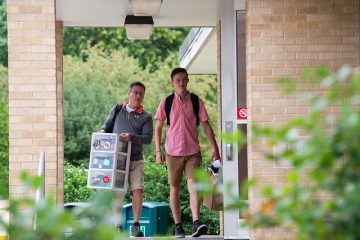 Kamara Zeise, a student from Green Bay who plans to major in special education, brought a collection of houseplants to decorate her room at Taylor Hall.

“Last year was tough (saying goodbye),” she said. “I was a little teary-eyed this Monday.”

Kamara’s step-dad, Jeff Simon, drove a truck to UW Oshkosh, while Kamara and her mom followed in a car.

Piles of items including televisions, futons, lamps, chairs, organizers, Keurig coffee makers and racks of clothes were common on the sidewalk and parking lots near residence halls. One student outside Taylor brought an iron and ironing board, another a special padded office chair for his desk.

Wayne and Lisa Taylor of Two Rivers were among select parents with two children moving in.

Wayne said he was happy they beat the crowds by being among the first to arrive on campus Sunday morning. They dropped off Alissa’s belongings and then headed to Horizon Village to drop off Adam’s. 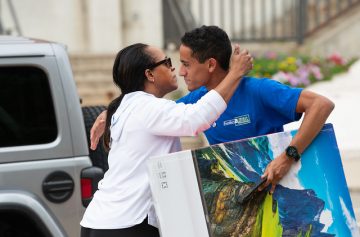 New student Nicole Bartels of Madison said her phone, laptop and mattress topper were important items to bring to campus. She was drawn to UW Oshkosh by the nursing program.

Tammy and Brian Bartels said Nicole is their youngest. The start of school has quickly turned them into “empty-nesters” with no children at home.

Alex Larson and Mitch Magolan, both first-year students from Mukwonago who will be roommates, were helping unload vehicles as MiTitans. The two decided to come to Oshkosh because Alex’s sister was a student and they know other students at Oshkosh.

Mitch plans to major in business; Alex is considering marketing.

The MiTitan duo said it appeared girls brought more room decorations with them, putting more thought into their rooms than the guys.

New student Connor Gallagher of Lodi brought a large TV and speaker, along with an array of clothes and other items. His mom, Heidi, wondered in the parking lot if the TV would be too big for his room.

First-year student Jenna Hoffman of Appleton plans to major in criminal justice, hoping to someday work as a parole officer. She had family helping her move into Scott Hall.

“I grew up watching criminal investigative shows. I thought I’d like to help teens stay out of trouble and have a good life,” she said. 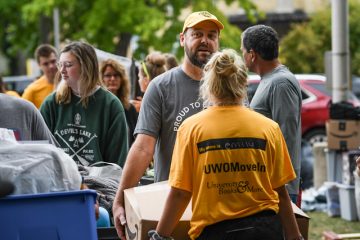 Hanna Gilbert of Watertown was excited to meet her roommate—she said they’ve been talking online for about nine months.

Gilbert plans to study radiology. She brought a mirror outlined with 14 small photos of family and friends and an extra refrigerator so there are no issues with food.