UWO prof triumphant in bicycle ride across Wisconsin for scholarships 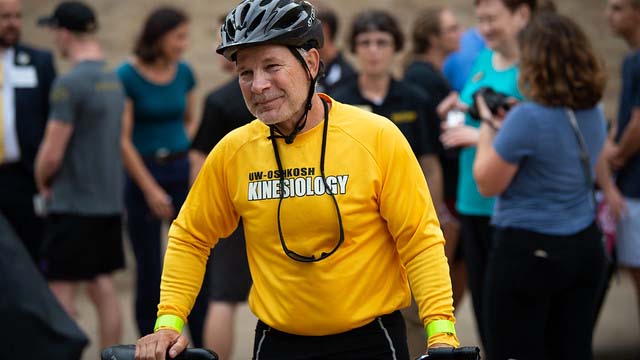 Kinesiology professor Dan Schmidt provided a big splash at University of Wisconsin Oshkosh Opening Day festivities Tuesday when he arrived on campus via police escort after riding his bicycle across the state in support of student scholarships.

“I’m doing well. All things considered, I’m feeling pretty good,” he said after crossing a large gold finish line, fist raised to a crowd of about 100 students and staff who were cheering, blowing horns and ringing cow bells. 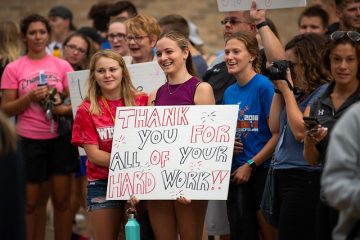 Schmidt said he left UW-La Crosse on Sunday, the start of a 150-mile journey that was planned to last 2 1/2 days. He stopped for the night at a public safety building in Necedah, staying with a pair of emergency medical technicians who were kind enough to drive to nearby New Lisbon to buy a big pizza for supper.

Schmidt said the EMTs had him sign a waiver—if they got a call, he’d have to go along in the ambulance.

Schmidt got back on his bike at 7 a.m. Monday, intending to put on around 65 miles and stay the night in Redgranite.

Chancellor Andrew Leavitt joined Schmidt for about 12 miles of the ride between Wautoma to Redgranite. It was a gesture Schmidt said he really appreciated.

Around 5 p.m., when he was planning to stop for the day, Schmidt’s wife informed him of strong storms that were headed to the area overnight Monday and Tuesday morning.

Needing to avoid thunderstorms and gusts of wind, he decided to push 35 miles more. He arrived home around 7:30 p.m. Monday after about 100 miles of biking on Labor Day. He biked across the state in just two days.

“I was so wiped out—I had nothing left in the tank,” he said.

Schmidt, an avid bicyclist, decided to challenge himself to build a scholarship fund for kinesiology students. He said he may be open to repeating the ride—possibly with some of his students. There was no word Tuesday on how much was raised.

Schmidt has been teaching kinesiology at UW Oshkosh for 22 years.