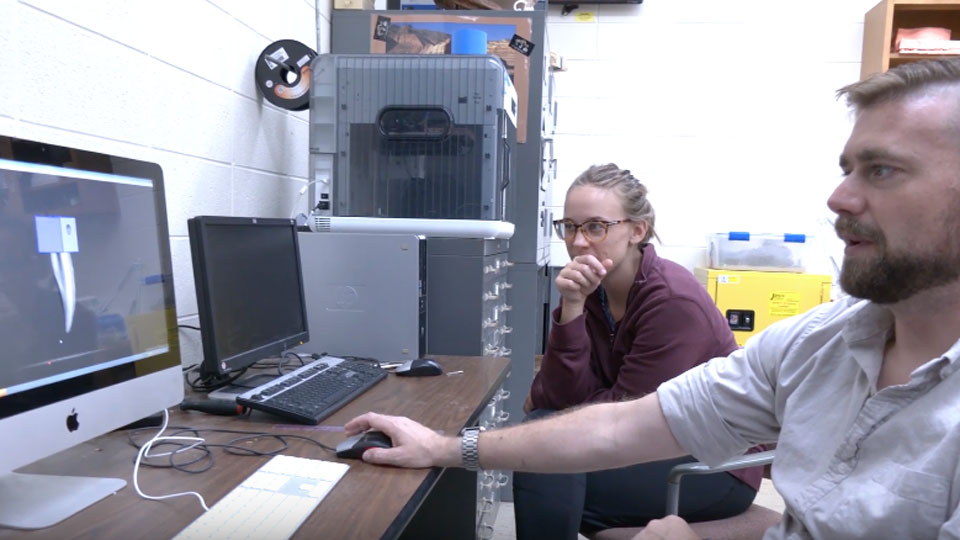 University of Wisconsin Oshkosh senior geology major Shannon Brink, of Wisconsin Dells, traveled to New York this summer to perform research on the bite force of juvenile Tyrannosaurus rex. She and UWO vertebrate paleontologist Joseph Peterson are now analyzing the data she collected under a collaborative grant from the Office of Student Research and Creative Activity.

Brink and Peterson hope to fill gaps in the knowledge about what the world was like when T. rex walked the earth.

“We’re starting to get an idea of how fast T. rex grew up, and even how strong its bite force was,” Peterson said. “But what we don’t know is how that bite force changed as the animal was growing up.”

Peterson and Brink are working with a particular fossilized T. rex skull that was found with four bite marks in it. They believe the bite marks came from another T. rex, and they are conducting research on how much force was required to make the marks.

“We’re trying to recreate those bite marks with a metal cast of a tooth in a hydraulic press and puncturing into cow long bones,” Brink said.

Determining the bite force of juvenile T. rex would help to paint a picture of what the animals were eating throughout their lifespans.