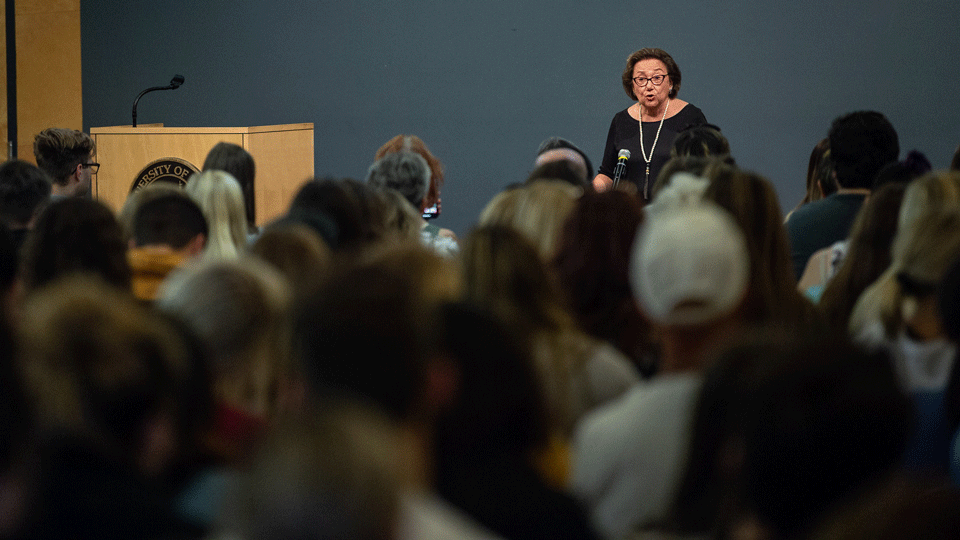 Eva Zaret traveled to the University of Wisconsin Oshkosh to provide students a first-hand account of the horrors of the Holocaust – a talk that drew more than 600 students, faculty and community members to the Reeve Union Ballroom.

Zaret was a young woman in Budapest when the Nazi regime laid siege on her home town. She survived the war and years of displacement in the harsh Carpathian Mountains. On a trip into the city, her family was caught in the outbreak of the Hungarian Revolution. She and her husband escaped on foot and eventually came to the U.S.

Zaret, 83, who resides in Milwaukee, brought several precious photos taken during her early childhood of her parents and sister. She told the crowd it is still difficult to talk about her father and family members who were murdered and she still has nightmares about certain things. 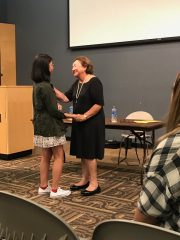 “I feel that I must speak to young people to make this world exist,” she said. “I’m scared it’s not going to if we are not good to one another.”

Zaret said hateful acts that occur today make her nervous and she told the audience not to be bystanders when they happen.

“I’m preaching peace,” she said, telling the crowd to share love and kindness.

UW Oshkosh graduate student, Zoe Meyers, became emotional as she told Zaret she was a member of the Jewish community. Meyers said she wasn’t planning to speak in front of the large crowd, but that Zaret’s talk and the moment “was just really powerful.”

Meyers and about 50 other students lined up afterwards to hug and talk personally to Zaret and take a photo with the inspirational survivor.