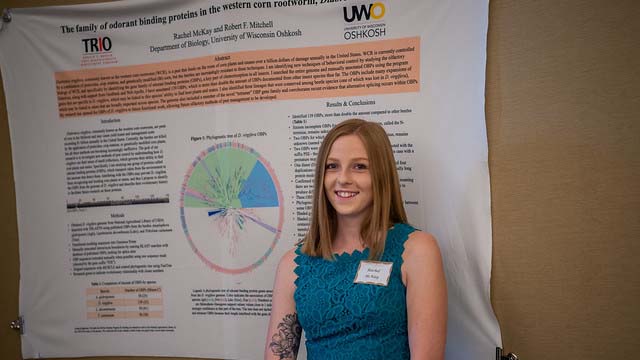 Returning to college after years away has afforded University of Wisconsin Oshkosh secondary education English major Stacey Sparks, of Neenah, a multitude of new experiences, caring intellectual mentors and the opportunity to take part in a McNair Scholar research project that’s close to her heart.

Sparks was among the 13 UWO students to present their research findings last week at the 11th-annual Ronald E. McNair Scholars Fall Showcase.

“We were there to celebrate our faculty-student mentor relationship and collaborative research on influential indicators of student behaviors outside of the Head Start program,” said Yoko Mogi-Hein, a senior lecturer of teaching and learning with the College of Education and Human Services. 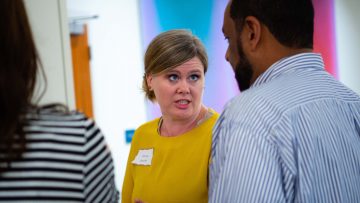 “Stacey is a first generation, non-traditional student whom I sponsored to take on this McNair pathway to a doctoral program in lieu of becoming a high school English teacher. We hope to maintain our relationship throughout the next five to six years to see her achieve her goal.”

Since her four young children are now all in school, Sparks decided last fall that it was time to return to college. Her youngest child is enrolled in Head Start, which turned out to be an interesting coincidence when McNair program director Cordelia Bowlus recommended that she focus on Head Start data for her research.

Besides Mogi-Hein, Sparks also was mentored by Michael Jasinski, a UWO associate professor of political science.

“For the research, we looked at community socioeconomic indicators and student social emotional variation within Head Start,” Sparks explained.

Head Start, a U.S. Department of Health and Human Services program, promotes school readiness of children under 5 through education, health, social and other services.

Their work suggested an unexpected relationship: the more individuals in a community with bachelor’s degrees, the higher the likelihood of social-economic concerns for Head Start students. The preliminary results indicate further verification and study.

“I have been reflecting much on how grateful I am for people and communities that wish to mutually support and encourage in diverse environments,” Sparks said. “I truly believe we are so much better when we share rather than compare our stories and encourage each other to branch out in new directions and reach towards new goals we might have not thought possible. Community matters.”

The following UWO students also took part in the 2019 McNair showcase with their faculty mentors:

UW Oshkosh is one of only 187 institutions nationwide to offer the federally funded McNair Program, which helps students develop the skills needed to get into and succeed in graduate school.