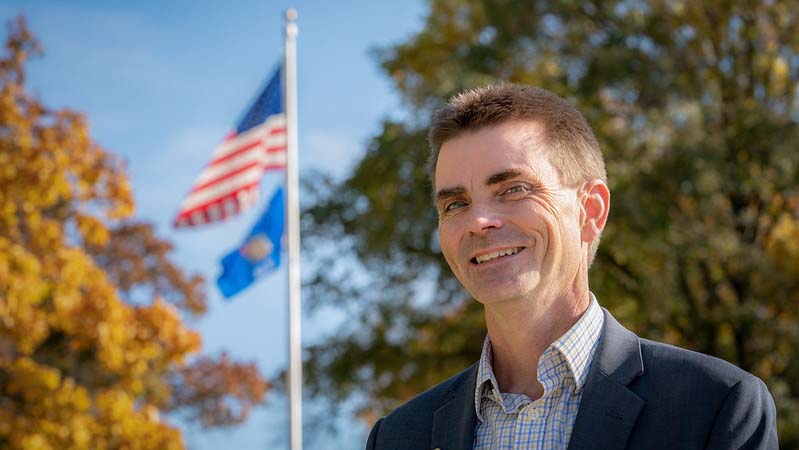 “America certainly is a country with a lot of opportunity,” said the Danish-born Iversen. “Over the years, I’ve enjoyed working with students to help them take part in that American dream and being part of that now myself feels good.” 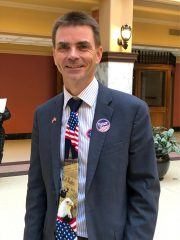 Iversen’s impact has long been great in the College of Business (COB), where he has chaired the undergraduate program and college technology committees and has served as the associate dean since 2017.

“Jakob has had a tremendous, positive influence on the college,” said COB Dean Barbara Rau. “He is well-respected for his thoroughness, organization and communication style. He is thoughtful, even-tempered and conscientious and has a strong work ethic.”

With an eye for improving processes, Iversen has helped the college be more efficient. “He has been a resource for faculty developing cost recovery programs,” she said.

“First, a diverse faculty is able to give students greater variety in the way they describe concepts, examples of solutions, lived experiences and examples illustrating concepts. It can spark excitement and curiosity, especially when the faculty member brings in new or contradicting ideas,” Rau explained.

“Second, a diversity increases the chances that students will find faculty members who they can personally relate to and connect with while in college. Finally, diversity allows for new ideas and new ways of doing things in the classroom and, administratively, that can ultimately improve what we do and how we do it.”

“We know from research that having a diversity of perspectives brings a better outcome,” he said.

In the wider community, Iversen has made his mark as well.

“He genuinely cares about the state of affairs in and around our institution,” Rau said. “He has compassion for his fellow citizens and supports initiatives outside of the University, such as the Grand Opera House and Women in Technology. I know that we are better off as a result of his leadership and contributions.” 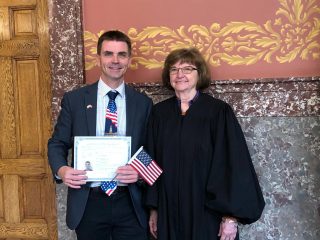 The road to citizenship

Iversen was born in Hoersholm, Denmark, where his parents and brothers still live. When his dad’s cousin moved to the U.S. in the late 1970s, Iversen thought that traveling and living abroad “seemed exciting.”

At 17, he spent a year as a Rotary exchange student in Edmond, Oklahoma.

“I learned to adapt to other cultures and situations. I became assimilated into the American culture, and I even picked up an Oklahoma accent,” Iversen said.

He also met and began dating his now wife, Kim Iversen ’04 MS, director of the NEW IT Alliance.

The couple embarked on a truly long-distance relationship that carried them through the rest of their high school and college years. When Kim finished college, she moved to Denmark. They married and had two of their three daughters there.

“The three girls and I are all dual citizens now,” Iversen said. “We have a lot of passports in our house.”

As Iversen was finishing his doctorate in computer science at Aalborg University in Denmark, he was encouraged to apply for visiting professor and assistant professor positions in the U.S.

That’s how he ended up at UW Oshkosh in spring 2000. “When I started, I thought it would just be a nice short-term experience,” he said.

But UWO proved to offer a good working environment, and the Iversens “fell into the community and found a rhythm here.” Besides, just the thought of moving again became daunting.

Over the years, Iversen had considered becoming a U.S. citizen but was reluctant to give up his Danish citizenship. In 2015, the law in Denmark changed to allow for dual citizenship.

This past April, he finally filled out the lengthy application. A month later he traveled to Milwaukee to have his photo taken and to be fingerprinted by U.S. Citizenship and Immigration Services. In August, he returned for an interview and a civics test, which he passed with ease. The toughest question was: “Who was Susan B. Anthony?”

On Thursday, he traveled once more to Milwaukee…this time to take part in the oath ceremony with 66 other immigrants from 30 different countries. Immediately after, he registered to vote courtesy of the League of Women Voters.

As a newly minted citizen, Iversen is most excited about being able to vote.

“I’m looking forward to that,” he said. “Being a citizen means you become a part of the society in which you live in a different way.”