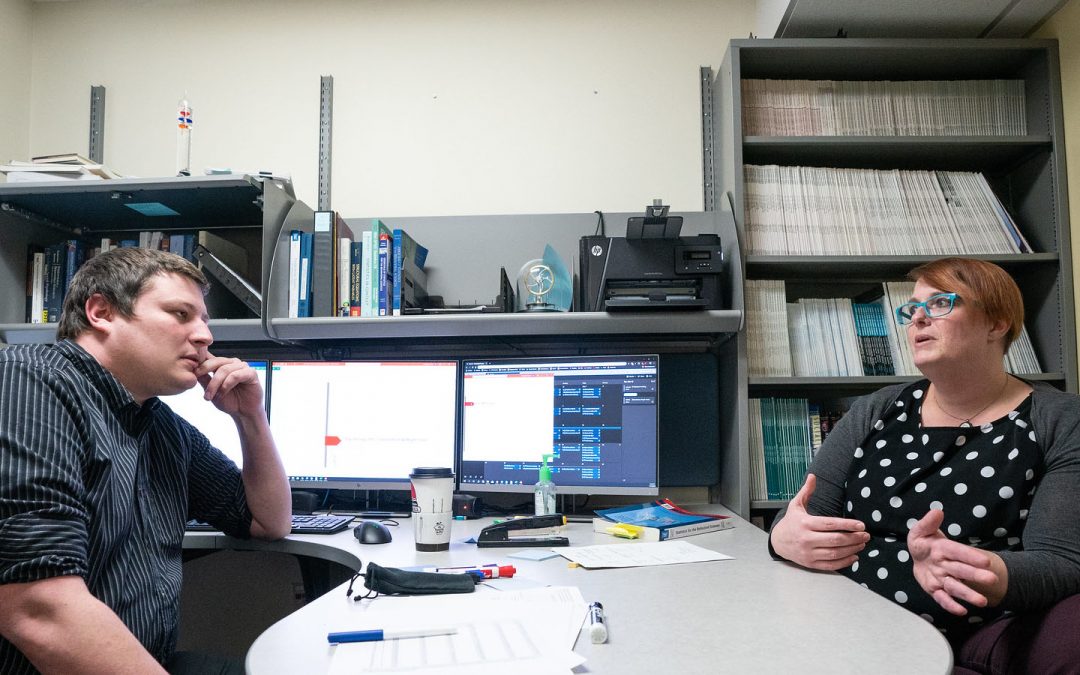 There are some professors at the University of Wisconsin Oshkosh who have come full circle as alumni-employees―teaching in the very departments where they were once students.

Three faculty members in the social sciences division of the College of Letters and Science―Amy Knepple Carney ’04 and ’12 MS, and Christopher Groves ’12 MS, assistant professors in the psychology department; and Matt Richie ’12, assistant professor in the criminal justice department―are among the more than 500 alumni who are employed in various roles at UWO.

A special gathering occurs each fall to celebrate the unique Titans X 2 connection alumni-employees have with campus. This year’s event is at 8 a.m. Thursday, Nov. 21 at the Culver Family Welcome Center.

“I applied for the job and when they offered it to me I knew it would be the perfect place to teach and do research,” Richie said, adding that UW Oshkosh is a “great place” to work. “I specialize in non-urban reentry from jails, and the Fox Valley had opportunities to further that research. I think this University allows faculty to connect with students in and outside of the classroom as well as to conduct high-quality research.” 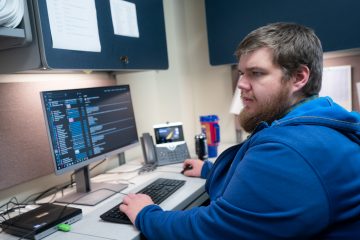 Groves said he was looking for an opportunity where he could specialize in quantitative methods. During his last year at Iowa State (working on his doctorate), he learned UWO was hiring someone with the training he had.

He said understanding statistics and how it’s used in psychological science requires a “different kind of thinking” that students aren’t practiced in, and figuring out how to develop that expertise is a constant source of interesting, challenging and satisfying problem-solving.

Knepple Carney, who returned to the Oshkosh area after some time teaching at a few other colleges/universities, tells students that a career choice is not all about how much money you can make.

“Make sure it is something that excites you and that you would be willing to do the job for free because you love it that much,” she said.

Knepple Carney initially was a chemistry major. That changed after she took a class with former UW Oshkosh psychology professor Susan McFadden.

“I was hooked on working with older adults,” Knepple Carney said. “I became interested in psychology because I wanted to be able to make a difference with the older adult population.”

Knepple Carney said her research focus and interests are on the broad topic of healthy aging.

“Since the aging population is growing and we are all aging, I am drawn to understanding how we can age well,” she added.

Richie said he initially wanted to be a police officer, but found his true interest was in statistics and research.

Ritchie has had students work in every corner of the criminal justice system—from policing to community and institutional corrections to working with defendants pre-trial or post-conviction to students going onto law school and eventually joining public defender or district attorney offices.

He said he challenges himself to make the material interesting for his students.

“I found that if you can make the material entertaining not only do more students come to class, but they also do better,” he said. “I promise my students every semester that if you treat college like a 40-hour work week, you get to know faculty, participate in an internship and stay out of trouble, you will be employed in the field when you graduate.” 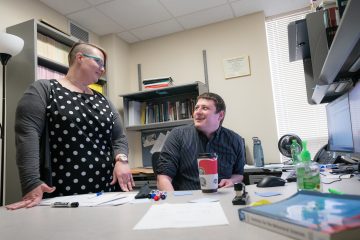 “I was, and still am, deeply grateful for all that program did for me so I was eager to return and give back to the department that had given me so much.”

Halfway through his undergraduate degree program at the UW Oshkosh, Groves switched majors from computer science to psychology.

He had been resisting the transition to a career (psychology) that resembled that of both his parents.

“I wanted to avoid feeling my career was predetermined,” Groves said. “However, I found the course material in my psychology classes to be irresistibly fascinating. More importantly, they allowed me to ‘see’ a rich complexity in the social world around me that I was oblivious to before taking those classes. It was like I had spent my life with severe myopia and was able to put glasses on for the first time. I was hooked.”

Knepple Carney enjoys instilling her excitement about psychology with the students in introductory courses who may not be sure on a major. She loves seeing the “lightbulb” go off when a student understands a topic for the first time.

Upper level students, she finds, are hardworking and motivated to learn more about the topics that she teaches.

“I really like the one-on-one opportunities we get to have with our students in psychology,” Knepple Carney said. “I have undergraduates working in my lab and I love being able to teach students about research but have them be part of all aspects of a project.”

Now that he has seen things as a student and instructor, Groves would tell students to work hard and use resources that the University has to offer. He advises students to ask questions in class, even if displaying ignorance is scary.

“I would also add one of the best pieces of advice I got, which was to surround yourself with the smartest, most industrious people you can find,” he said. “It is a humbling process, but you’ll learn so much from them.”