Students and faculty at the University of Wisconsin Oshkosh Fox Cities take time each semester to learn about friends on campus who are studying thousands of miles from home.

A large crowd enjoyed food from different world cultures, games, music ― even dance lessons―at a fun international student event Nov. 20 in the Student Union. Rows of tables were set up as stations where four to five new international students at each—75 in all—played a game or displayed poster boards describing an activity from their home country. 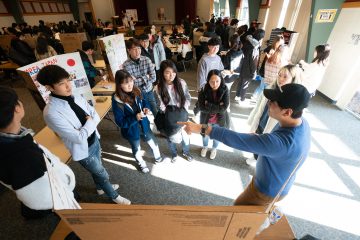 There are more than 150 international students at the Fox Cities campus.

Taewoo Park, a student from South Korea in the midst of his first semester, was explaining a Korean poker game at his booth.

Park said he plans to transfer to UW-Madison after two years. He also hopes to attend aviation school to train to be a commercial pilot.

He said he likes being in the Fox Cities and is trying to watch and learn American football.

Arundhati Shelat, a first-semester student from India, was demonstrating a dance to Indian music and had a crowd following her lead as they practiced their moves.

Shelat said the cold weather in Wisconsin is a big adjustment and she’s purchased a heavy winter coat. She moved to the area not knowing anyone.

“We (international students) work together and I met some great friends,” the outgoing public relations major said.

Cole Hansen, a first-year student from Freedom, was taking in some of the international food—including Mongolian beef he liked best–with chopsticks. 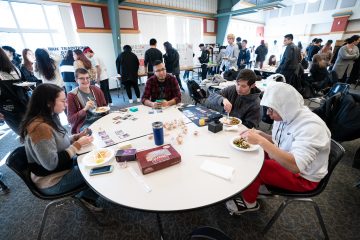 The political science major was with a group of UWO Fox Cities Student Government officers and friends.

“The international students help get people involved and work hard on events,” said Kendra Keeley, a journalism major from Kaukauna.

It was a fun afternoon as participants checked out the spicy food contest, chopstick contest, origami demonstration and the opportunity to learn about Meokbang, described as a “youTube sensation” in South Korea.

One booth led by a group of male students, showed facial makeup styles for Chinese traditional opera. Another booth described several games in South Korea, including 007Baam and the Game of Death.

Youngho Jun, completed required military service in Korea before embarking on his education. The 25-year-old, first-semester student aspires to a career as a chemical engineer.

All of the international students need to show a level of English proficiency before they can start degree classes. 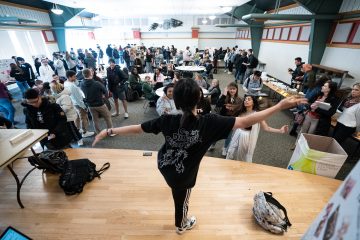 “The new students had to present (their activity or information) in class—kind of a graded dress rehearsal—to get ready for this event,” she said. “It teaches group project skills and speaking in front of people.”

There are just over 150 international students on campus at UW Oshkosh Fox Cities this semester.