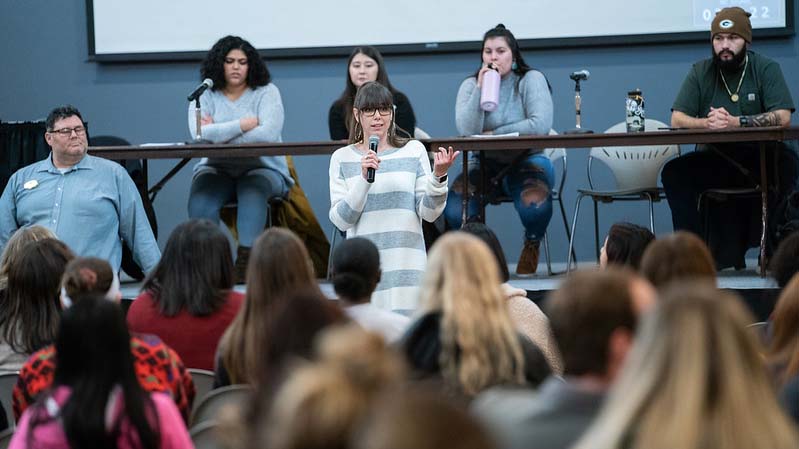 More than 150 students at the University of Wisconsin Oshkosh took part in a unique dialogue intended to debunk stereotypes and myths associated with life as a Native American.

Called Ask an Indian, the two-hour question and answer session held recently at Reeve Union provided a learning opportunity in a safe setting with no question considered a bad question.

Dennis Zack, coordinator of American Indian Student Services, said he was thankful about plans for Ask an Indian, when his 3-year-old child in daycare received a book, My Little Pilgrim, that included an image of pilgrims and Indians related to the Thanksgiving holiday.

Zack and Heidi Nicholls, a cultural anthropologist at UW Oshkosh who initiated the event and served as emcee, both have Indigenous heritage.

School curriculum, the leaders said, largely continue the myths and inaccuracies and Wisconsin Act 31 is not being held up to its intent. Act 31 mandates that students in public schools be provided education about the Wisconsin Native American cultures through sessions in elementary, middle and high school.

Many Native Americans do not celebrate the arrival of pilgrims and other European settlers because Thanksgiving Day is a reminder of the genocide of millions of their people, as well as the theft of their lands and assault on their cultures. 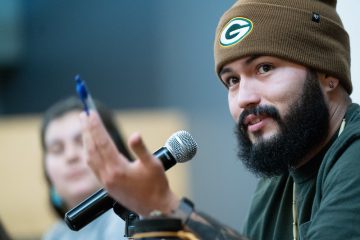 Zack said members of the UW Oshkosh Intertribal Student Council (ITSC) wanted to have the event before Thanksgiving to talk about offensive topics and combat stereotypes and myths.

Indigenous students who took part in the panel were Elashia Rosado-Cartagena, a junior anthropology major from Racine; Trinaty Caldwell, a sophomore biology major from Keshena; Tatum DePerry, a junior secondary education major from Shawano; and Nicholas Metoxen, a senior double-majoring in psychology and Spanish from De Pere.

A number of written questions from the crowd were discussed by the Indigenous students. Following are a few of the topics: