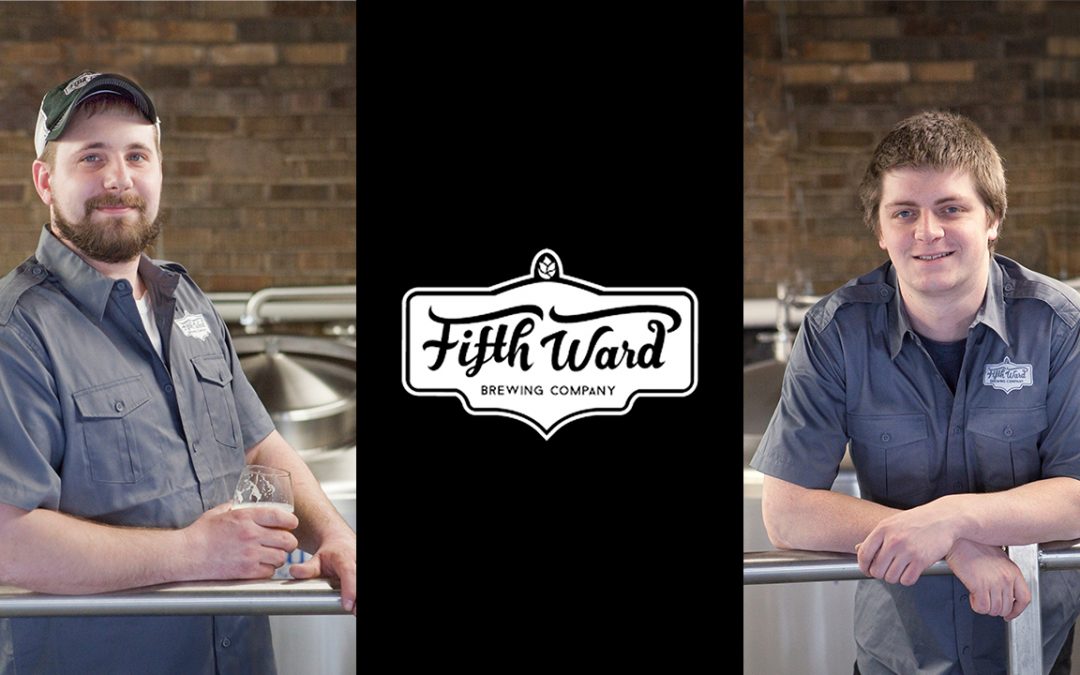 A pair of local brewers with ties to the University of Wisconsin Oshkosh recount the challenges and successes of starting a company from the basement of their college apartment.

Ian Wenger didn’t know where life would take him when he graduated from UW Oshkosh in 2014, but his roots as a biology major and devotion to a dream equipped him to become a tenacious entrepreneur and celebrated brewer in the heart of downtown Oshkosh.

Fifth Ward Brewing Company over the last two years has become a huge draw on the south end of Main Street. But for Wenger and his co-founder Zach Clark, it took hard work, perseverance and hundreds of gallons of homebrew to get where they are today. 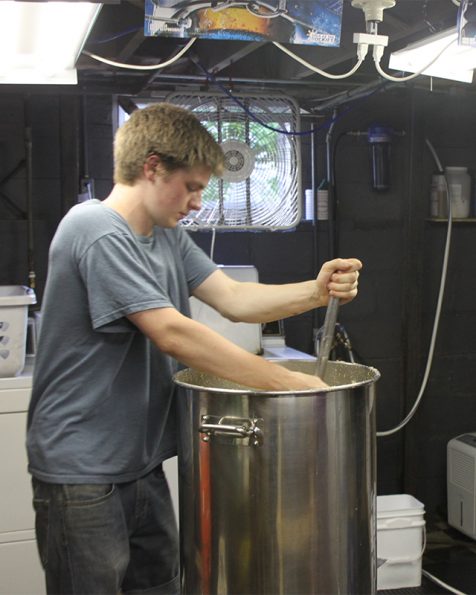 Wenger first became interested in the art and science of brewing during a mycology class early in his college career. As a young adult he began experimenting and fermenting his own wine, and a hobby grew from there.

As college students, Wenger and Clark worked together in the kitchen of Dublin’s Irish Pub in Oshkosh. Both witnessed firsthand the resurgence of the craft beer movement at a restaurant famed for its wide selection of beers on tap.

Eager to join the movement, they decided to try their hands at brewing. A partnership naturally unfolded as Clark purchased basic brewing equipment and Wenger brought forth his experience with fermenting. From there, there was no question in their minds that they should make a business out of it.

“Before we even had brewed a batch of beer together, we were already in,” Wenger joked. “We were totally naive, but knew it was a cool idea.”

The two homebrewers set up shop in the basement of their college apartment on Prospect Avenue near the Oshkosh campus. But even with humble beginnings, they knew this was going to be something big. 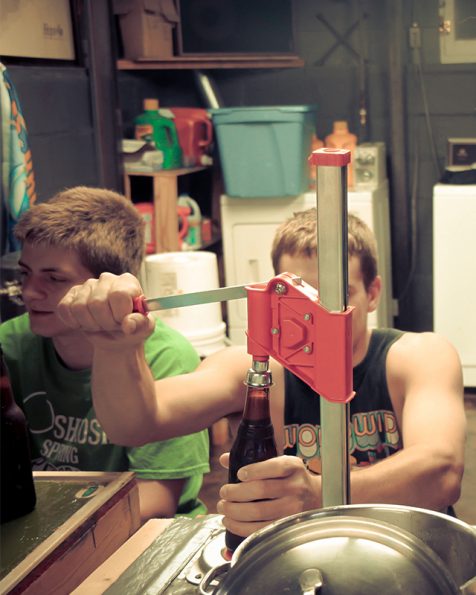 With an affection for culinary arts, Wenger and Clark concentrated on following original recipes and using authentic ingredients to gain a better understanding and appreciation for the techniques, flavors and intricacies of brewing beer.

“At the beginning it was really hit or miss,” Wenger said. “But over time we took notes and gained knowledge that brought our beer to the next level.”

Beyond brewing, they knew they had to branch out and fully immerse themselves in the local beer culture if they wanted to be successful. The college students got involved in the Society of Oshkosh Brewers and entered their product into as many beer tastings and festivals as possible to collect feedback.

For two years they honed their skills and refined their processes—brewing beer as often as three times per week. Wenger said eventually their product evolved from tasting like homebrew to tasting like real, quality craft beer. He and Clark had forward momentum and weren’t about to slow down.

Using a roommate’s business textbook, the two mapped out a business plan that would take their basement homebrewing operation to the next level. Every time they brewed, they filled in another section of the plan. Over the course of several months their business plan was complete, and Fifth Ward Brewing Company was on its way to becoming a reality.

Bubbling up from basement to business 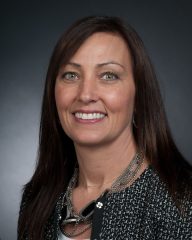 Wenger and Clark took their idea to the Small Business Development Center (SBDC) within the UW Oshkosh College of Business.

“Without having formal business backgrounds, we knew what we didn’t know. We did our best to educate ourselves, but we also weren’t afraid to ask for advice,” Wenger said.

SBDC Director Colleen Merrill helped the hopeful homebrewers form an LLC and got them involved in the Titan Accelerator Program through the Alta Resources Center for Entrepreneurship and Innovation (CEI).

The Fifth Ward brewers worked tirelessly to pitch their business, find investors, secure a bank loan and select a location for their brewery. Concurrent to Wenger and Clark entering the market, the Greater Oshkosh Economic Development Corporation (GO EDC) was being established with a mission to revitalize downtown Oshkosh. 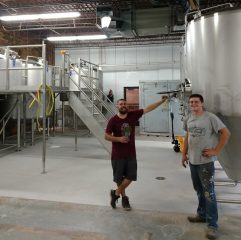 Fifth Ward Brewing Company was a prime candidate for GO EDC’s redevelopment initiative. The two entities worked together to get the craft brewery on the map and acquire fixed equipment necessary for commercial brewing.

“We didn’t want to miss out on the redevelopment,” Wenger said about his brewery’s site at 1009 S. Main St. “Although the Menominee Nation Arena wasn’t in the picture at the time, we wanted Fifth Ward to be on the main drag.”

Wenger and Clark had a heavy hand in renovating the old space and carefully designing the new footprint. All the pieces came together with the support of GO EDC and the continued guidance from Merrill in the College of Business.

As they gained traction in their entrepreneurship, they met Maurice “Mo” Berglund, an enthusiastic investor nearing retirement and looking for a place to hang his hat. Berglund was enamored with the idea of a craft brewery on the south side of Oshkosh. And as if he were cut from the same cloth as Wenger and Clark, Berglund settled in as a brand ambassador and mentor for the young brewers. 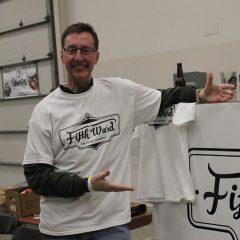 “If you’re ever trying to start a business, find yourself a Mo,” Wenger said, grinning.

Berglund is considered the third co-owner of Fifth Ward Brewing Company and continues to rally support for the enterprise as it grows.

Making a splash in downtown Oshkosh

“I find a lot of joy in it,” Wenger said. “Especially since it’s my own beer that I’m selling.”

Their culinary backgrounds inspire many of the unique beers they have on tap. In addition to the three flagship beers available year-round—Comb & Crocus, Burl Brown and 842 Pale Ale—they aim to release at least one new pilot batch per month, with a focus on distinct yet balanced flavors.

The two brewers maintain their relationship with Merrill in the SBDC at UW Oshkosh not only for guidance, but also for motivation to continue pushing their limits and growing their business.

“From the beginning Zach and Ian had a vision of what they wanted to create—an infusion of culinary taste with the craft beer experience,” Merrill said. “The reason they are and will continue to be successful is rooted deeply in who they are. They pay attention to every detail and produce the absolute best craft beer in this region.”

The SBDC director said Wenger and Clark are true entrepreneurs. Throughout their journey they sought out mentors, listened to advice and really took time to understand the industry they were entering. She described them as tenacious, hard-working and constant innovators.

“Three years down the road, five years and so on—what do we want Fifth Ward Brewing Company to look like?” Wenger asked. “And how do we get there?” 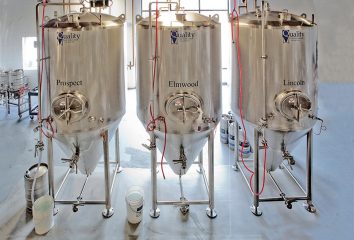 Wenger and Clark have several ideas for potential ventures to grow their business, which include experimenting with locally sourced ingredients, launching a food truck or pop-up brewery, and becoming more involved with the forthcoming Oshkosh Food Co-op.

With three large fermentation tanks aptly named Prospect, Elmwood and Lincoln, they never lose sight of their connection to the Oshkosh campus. The vision of Fifth Ward Brewing Company started in the basement of an unassuming college apartment, and the rest is history.