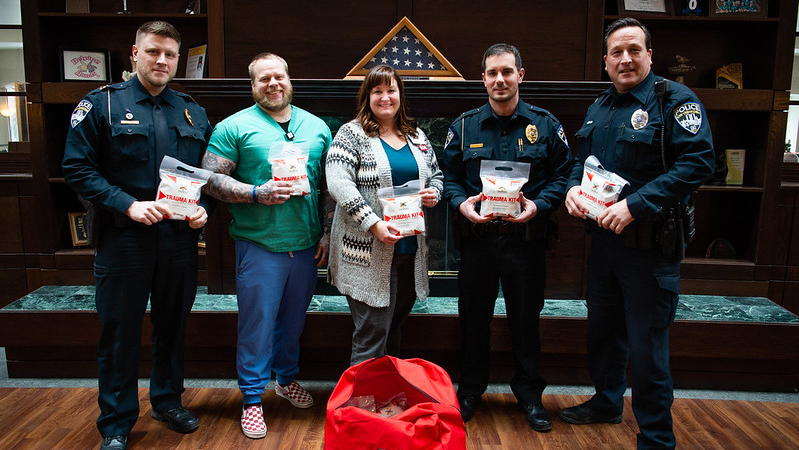 In an effort to increase safety at the University of Wisconsin Oshkosh, Aurora Medical Center in Oshkosh donated 30 Stop the Bleed Kits to be placed around the Oshkosh campus for use during emergency situations. The UW Oshkosh Police Department recently accepted the donation at Aurora Medical Center.

The lifesaving kits contain supplies to help control traumatic bleeding and can mean the difference between life and death in dire situations. They will be placed in easily accessible locations throughout campus that are recognized as high pedestrian traffic areas, including academic buildings and event venues.

“Our goal is to have them located close to other emergency equipment, specifically AEDs, within the buildings, to keep a unified location and to help locate the Stop the Bleed Kits no matter which building people are in,” said Oshkosh Police Lieutenant Trent Martin. 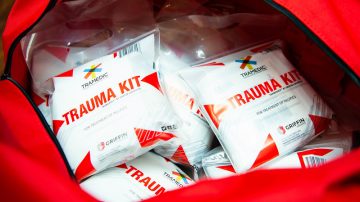 While the kits are designed to be used by anyone who is familiar or comfortable with them, the police department plans to host open forums in conjunction with Active Threat open forum trainings to show students, faculty and staff how to use them.

Funds for the kits were raised at Aurora’s annual Live Well Event. Due to the event’s success, the foundation also was able to donate Stop the Bleed kits to other schools in the Oshkosh area as well.

“The nice part about Stop the Bleed is that it can be used for any type of life threatening bleeding,” said Tracy Miller, emergency preparedness coordinator for Aurora Medical Center said. “It doesn’t just have to be used in active threat situations.”

Martin said the bleed kits are just one facet of the police department’s entire safety plan for campus.

“It’s important that we remain proactive with our approach to safety on our campus rather than reactive,” Martin said. “These kits help us proactively provide tools to our campus that could essentially save lives if they are ever needed. We can’t thank Aurora Medical Center enough for helping us get to the next level of preparedness at UW Oshkosh.”