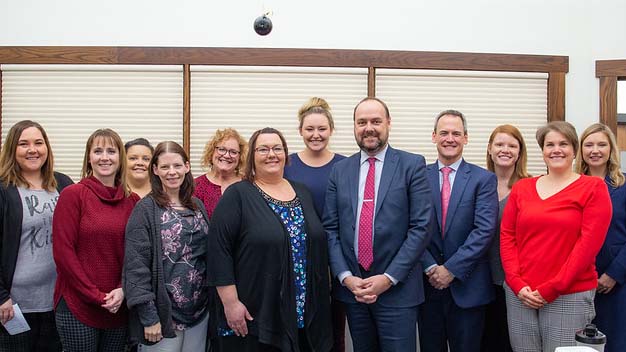 Lesa Kuberski, who works as an executive assistant for the Office of Student Affairs at the University of Wisconsin Oshkosh, has been named the recipient of the January 2020 STAR Award.

She was nominated by Art Munin, associate vice chancellor and dean of students.

“Lesa has consistently gone above and beyond her role during the time I have served as acting vice chancellor. As one aspect to her stellar service, when Dr. Green departed for her interim appointment at UW-Whitewater in January 2019, it placed a great strain and responsibility on her role. She was tasked with managing all the associated staff transitions throughout the Division of Student Affairs. Lesa managed all facets of this complicated process while also tackling the vacancies in the front desk position in Student Affairs and the AVC for enrollment management. Every time a ball was almost dropped, Lesa was there to make the save and ensure that Student Affairs continued to move forward in a positive direction.

“A second notable aspect to Lesa’s work has been her coordination of the administrative process for the assistant vice chancellor for enrollment management search. This work has occurred throughout the spring semester/summer and coincides with all of the aforementioned work transitions that Lesa has managed. Honestly, I felt really awful about asking her to take on this role for the search. However, this search is so very important that I did not want to trust it to anyone else. As always, Lesa rose to the challenge and coordinated all aspects of this search impeccably. Lesa is a diligent staff member and leader that is well-deserving of recognition at UW Oshkosh. Any success that Student Affairs experienced since all the transitions that occurred in January 2019 were only possible because of her.”