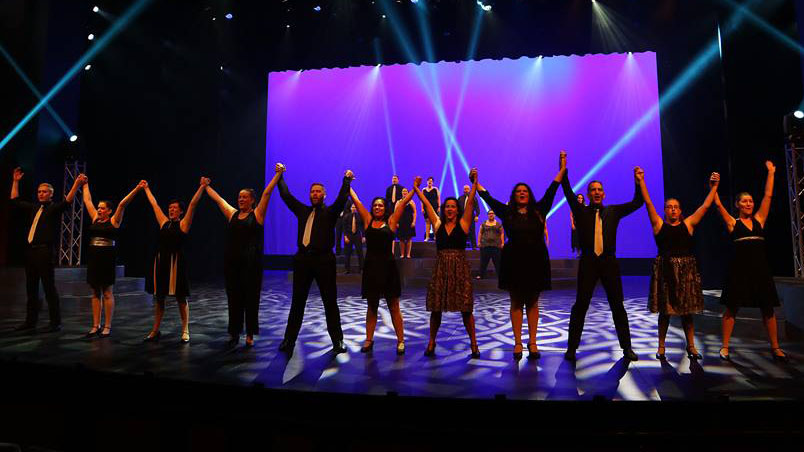 More than a decade ago, University of Wisconsin Oshkosh Fox Cities campus and community leaders saw the need for a space that could function as both an academic building supporting the university’s fine arts curriculum and as a performing and visual arts center serving the Fox Valley region.

The vision led to construction of the Communication Arts Center (CAC), which became a beacon for arts in the area. 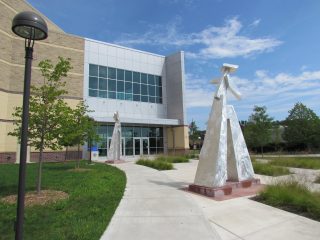 The $14-million project was funded through a unique public/private collaboration between Winnebago and Outagamie counties; the state of Wisconsin and the UW Fox Cities Foundation (formerly UW-Fox Valley Foundation). The campus foundation led a capital campaign with private donors to raise $2 million of the total needed for the project.

The very first campus theater department performance on the brand-new stage was Metamorphoses by Mary Zimmerman. Susan Rabideau, UWO Fox Cities theater arts professor and director of theater programs, recalled that they built a swimming pool for the set.

Since then, hundreds of students and community members have been a part of the 224 theatrical performances, 62 art gallery exhibits, 60 concerts and 58 ballet and dance recitals hosted in the CAC. The building also hosts numerous meetings, conferences and exhibitions each year.

“The presence of the CAC has been transformational for the campus in so many ways,” Rabideau said. “Because of this amazing facility, we can stage productions that were impossible in the old theater. The cultural opportunities transcend theater to include art, music, dance, film and more. It has more than achieved our goals by becoming a jewel not only for the campus, but also for the community through our ability to serve the greater Fox Cities by hosting so many community events.” 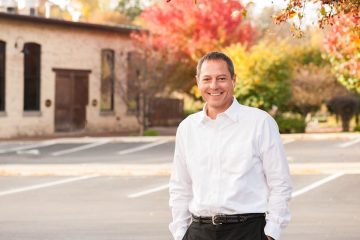 Trevor Frank, the lead architect on the project from Short Elliott Hendrickson Inc., said the CAC is one of the highlight projects of his career spanning more than 25 years.

“We were working for a great group of clients that had a vision and a dream to make the theatrical arts program at UW Fox (now UWO Fox Cities) one of the best in the Midwest–and they succeeded,” Frank said. “I don’t know who had a more arduous task: the design team, the contractor or the fundraising committee. Needless to say, there were countless numbers of people who worked tirelessly for almost three years to make the vision a reality.”

One interesting aspect of the design is the intimacy of the house in the (Perry Hall) theater.

“I know there was expectation by some on campus that the capacity of the house should be large, large enough to host commencement, but Susan (Rabideau) had a vision for a more intimate house–one that in her words ‘would grab the attention of every audience member and connect the actors with the audience,” he added. 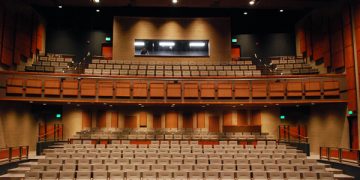 The theater was designed with a balcony cantilevered over the main floor in a way that makes audience members feel like they are an arm’s length from the stage. Frank likened it to someone sitting in a 10-by-10 foot living room watching a 75-inch, high-definition television.

“In fact, the house was so intimate that during construction, the contractor questioned whether there was an error on our drawings. In his opinion, there was ‘no way’ to get that many seats in the theater,” Frank said.

“We concluded performances would be truly spectacular–from every seat. Over the past years, I have designed millions of square feet of facilities, none of which were as impactful to the community or its occupants as the CAC. During that project, I made friendships that will last a lifetime. My wife and I consistently return to attend performances and events in the CAC. It is a special place on a special campus thanks to the vision of so many.”

With a compacted footprint and an eco-friendly design, the CAC incorporates Leadership in Energy and Environmental Design (LEED) strategies and is LEED Gold certified.

Built by Miron Construction Co. Inc., the project team engaged students to document some of the LEED submissions. This provided an educational opportunity to fully appreciate the integration of sustainability into the design and construction of the building. Quiet study spaces and group spaces with comfortable furniture draw students to the building from other parts of the campus.

The CAC was purposely joined to the main Fox Cities campus building to ensure connectivity to the academic mission. When not used for academic programming, the CAC is available for the community to rent as event space. 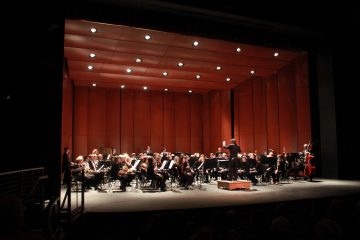 To recognize a decade in the CAC, Rabideau created a special series of theater performances for the 2019-2020 academic year sponsored by the UW Fox Cities Foundation.

Fall 2019 campus theater productions included Hamiltunes: An American Singalong and The Curious Incident of the Dog in the Night-Time. Upcoming shows for spring semester include Shrek: The Musical running Feb. 20-22 and Feb. 27-29, followed by the popular Dream Roles annual production April 23-26.

The Aylward Art Gallery in the CAC serves both students and the community with a year-round schedule of programming, bringing artists to campus for exhibitions, public lectures, demonstrations and workshops. Gallery Director Lynn Zetzman also coordinates a student art exhibit at the end of each semester.

“Thanks to the vision of donors, our municipal partners, community members and campus leaders, the Communication Arts Center on the UWO Fox Cities campus has been an incredible resource for arts on campus and in the community,” said Martin Rudd, UW Oshkosh assistant chancellor for access campuses.

“A building is just a building until it comes alive with the many different performances and events that have been presented in the CAC. We are looking forward to continuing to highlight our campus fine arts programs and hosting an immensely diverse collection of community events over the next decade and beyond.”