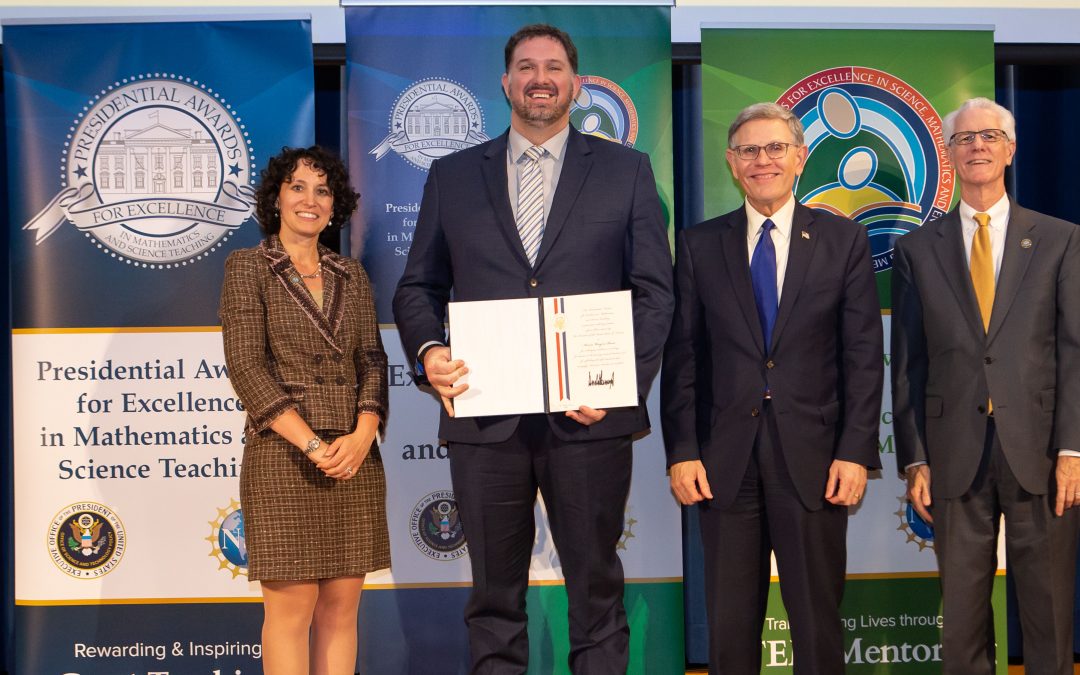 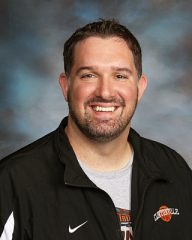 Kevin Reese, of Clintonville High School, is a UWO math adjunct instructor who represented Wisconsin last month in Washington, D.C., as winner of the Presidential Award for Excellence in Science and Math Teaching.

In addition to a whirlwind trip to the nation’s capitol that included dinner at the Kennedy Center, award ceremony at the Department of the Interior and a White House tour, Reese received “red carpet” treatment and a $10,000 prize from the National Science Foundation.

Reese spent several days on the trip celebrating with family members in what he called the biggest moment of his professional career.

A math teacher at Clintonville for 18 years, Reese explained that several years ago his “once beloved career had turned into an unfulfilling job.”

He challenged himself with new methods and techniques of teaching and worked to build positive relationships with students while remaining confident in the curriculum.

“I soon found myself being recognized by the superintendent for my effort by being nominated for the award,” he said. “I had started seeing positive results in the classroom and also the smile returned to the mirror. It was during that self-reflection to invigorate my career that I also learned about the CAPP program at UWO.”

Interestingly, Reese said he teaches math mainly because the subject challenged him the most in high school and college.

“When I decided to become a teacher, I wanted to be teacher of a subject that challenged me, so that I could use that experience to better relate to my students (rather than teach a subject that I found easy),” he said. He added that he loves taking students who are not ready for his class at the start of the year to a level at the end of the year where they “soar” over a high bar he has set for them.

Reese said his presidential award was a reflection of all the hard-working staff and students that he has worked with and served over the years. His faculty liaison at UW Oshkosh is Chris Edwards of the math department. 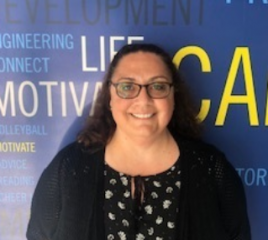 Stephanie Ballard, of Campbellsport High School, is a UWO chemistry adjunct instructor and a Wisconsin nominee for this year’s Presidential Excellence in Science and Math Teaching award.

Ballard, in her 24th year at Campbellsport, teaches Fundamentals of Chemistry, Honors Chemistry and CAPP Chemistry I and II. She has worked as a senior class adviser and Science Olympiad coach. She started a Girls Who Code Club and led numerous professional development opportunities. She has been on the roster of presenters at the Wisconsin Society of Science Teachers convention.

“When I found out I was a finalist, I was in shock and really pleased,” she said, knowing how stiff the competition is just to be named a nominee.

Ballard said she is grateful for the support she’s received from colleagues, students, former students and administration.

Her faculty liaisons at UW Oshkosh are Yijun Tang and Sheri Lense, both of the chemistry department. 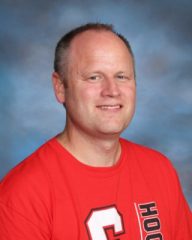 Nate Grimm, in his 21st year teaching at Slinger High School, is an adjunct instructor of sociology for UWO.  Grimm, with some guidance on building frameworks for sociological perspectives for site visits provided by Paul Van Auken sociology professor and chair at UWO, published a study he and his Slinger High School/UW Oshkosh CAPP students designed and implemented.

Van Auken, UWO faculty liaison, said Grimm does excellent community-engaged research projects with his CAPP Sociology 101 students. There are varied themes, and students research local issues through interviews that tie-in to sociological content from the class. A number of community members attended student presentations on their findings at the Slinger Area History Culture Night and his work was featured prominently in a national educational magazine, Journal of Folklore and Education.

“The networking with the UW Oshkosh sociology department and CAPP adjuncts from across the state allows us to share lesson ideas, discuss resources and work on developing ways for high school students to transition to college, career and citizenship together.”

Grimm said students are the real winners with opportunities to directly and indirectly work with Van Auken and UW Oshkosh.

“Students generally exit the class with stronger leadership skills, a better understanding of agency and structure and the ability to see beyond self,” Grimm said.

Merranda Boardman, a life sciences educator and biology club adviser at De Soto High School, won $1,000 in grant funds offered through a program called Tools for Schools.  Boardman, an adjunct instructor for UW Oshkosh, will use the funds to purchase electrophoresis chambers. She was featured on a television segment and noted that the first two chambers she purchased were used in support of the UWO CAPP program. 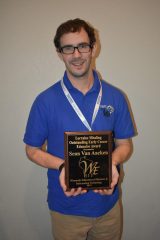 “Best of the best”

“Our CAPP teachers are the ‘cream of the crop,’” Dobyns said of the 450 high school teachers who instruct UW Oshkosh CAPP courses. 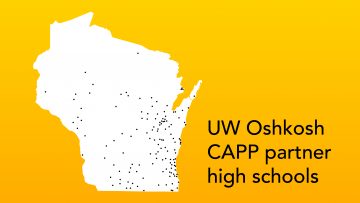 More than 30,000 UW Oshkosh college credits will be awarded to high school students in 2020.

CAPP students save more than $200 per credit when enrolling in CAPP during high school, versus the tuition paid for the same class on campus. Enrollment in CAPP is free and offered to students in their junior or senior year of participating high schools.

UW Oshkosh has the only concurrent program in Wisconsin accredited by the National Alliance of Concurrent Enrollment Partnerships (NACEP).

Dobyns said more than $80,000 in scholarships are awarded to high school graduates who had CAPP classes and choose to “start a Titan and stay a Titan”― keeping their credits at UW Oshkosh as an undergraduate.