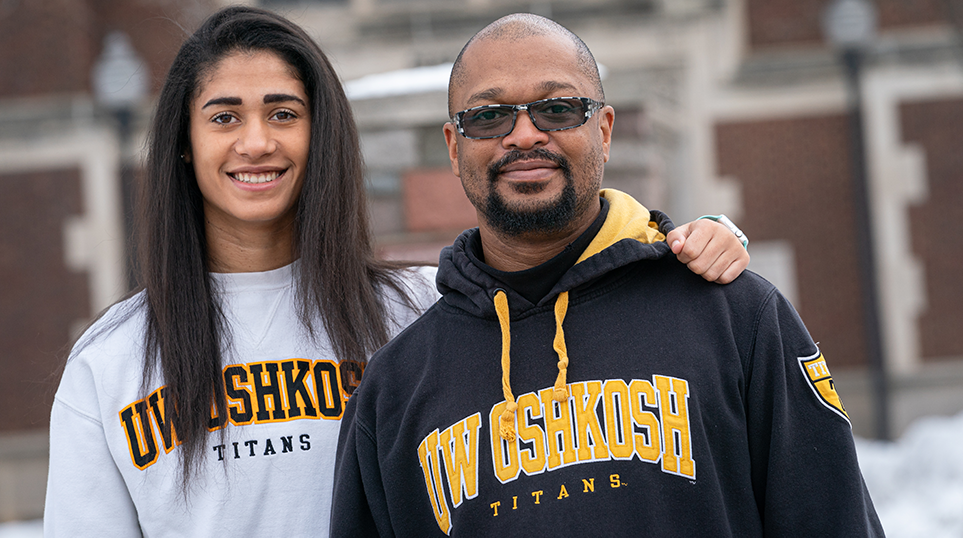 University of Wisconsin Oshkosh senior Madison Smith always knew she would go to college. It was something her parents instilled in her at a young age.

As she hit middle school and her dreams of life on campus moved ever closer, her father Timber Smith’s desire to graduate from college intensified, too.

“I can’t be the role model unless I pave the way first,” Timber often said.

After a collegiate journey spanning 19-years, UWO Veterans Resource Center coordinator earned his undergraduate degree from UWO, four years before Madison stepped on the same campus to start her own journey as a Titan.

Timber grew up in Milwaukee and arrived at UW Oshkosh in fall 1992, after graduating from Whitefish Bay High School.

After a year and a half at UWO, Timber left for the Army Reserves. Basic training and Advanced Military Training (AIT) kept him away from Wisconsin for under a year. He returned to campus in 1994—the same year he met Theresa Pelky. They married three years later and welcomed daughter Madison the same year. 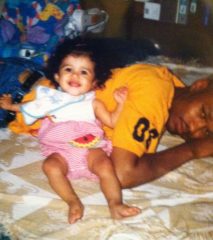 Life interrupted his path to a bachelor’s degree.

“It was always on my mind,” Timber said. “Graduating was a driving force.”

While working for Fox Valley Tech and the Appleton School District, he connected with UWO’s Graduation Project, which helps students who have 75 credits or more from UW Oshkosh come back after at least one semester away from taking classes.

“I was one of those people who had a million credits but couldn’t figure my way to a degree,” Timber said. “The Graduation Project and counselor Beth Richards helped me.”

With his wife’s support and Madison as his biggest motivator, Timber found a schedule that worked for him—evening, weekend and online classes.

“When you start something so long ago and you finish it so much later, there was so much that had changed,” Timber said. “There were online class options, there were new opportunities that weren’t there before but helped me maneuver around working full-time and taking care of a family.”

In December 2011, Timber’s nearly two-decade journey culminated by earning his bachelor’s degree in sociology. But he didn’t stop there. He quickly started graduate school and earned a master’s in educational leadership and policy in 2016.

He walked at both graduations, of course. Theresa and Madison, an eighth grader in 2011, were in the stands at Kolf Sports Center, as were other family members, including his mother DeElla Henderson. 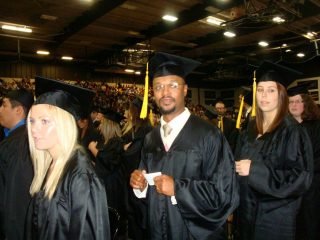 “The first time seeing him walk was pretty cool, because he always made a point that he didn’t want to tell me to go get a college degree if he didn’t have one,” Madison said. “My mom and I were extremely proud.”

“I was the older person graduating, but I was being teased because my mom was the one that was sitting over in the corner making me pose for pictures and taking 1,000 pictures of me.”

As Timber graduated and began his professional career at UWO—first as an admissions counselor before transitioning to the Veterans Resource Center—Madison was blossoming into a soccer star, which had her thinking differently about her college choices.

“Soccer was the main drive of picking a college early in high school,” Madison said. “I wanted to play Division I soccer but as I got older, I realized that I didn’t want soccer to be my main focus.” 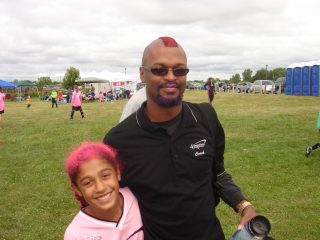 With a desire to have a well-rounded experience that included soccer, a great education and internship opportunities, Madison began narrowing her school options to Division II and Division III institutions.

“I really liked Michigan Tech and thought I was going to go there but I wasn’t 100% set on engineering and it was a long car ride away, which meant my parents wouldn’t be able to see many of my soccer games,” Madison said.

In April of her senior year of high school, Madison ultimately decided to attend UWO.

“UW Oshkosh was the best fit for me and became my No. 1 school,” Madison said.

The younger Smith dove head first into life at UW Oshkosh. She thrived on the Titan soccer team, found a passion for interactive web management and, with resume help from her dad, busied herself with multiple internships, both on- and off-campus.

“My dad always said to get a job,” Madison said. “I am now currently working at three internships, and I probably wouldn’t have these jobs without my dad pushing me. He has helped me grow and always makes me want to achieve more.” 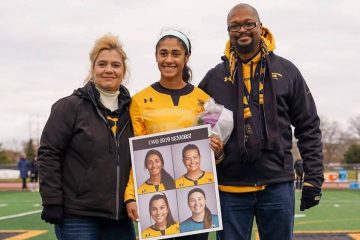 Madison ended her four-year soccer career as a Titan in November. She transitioned from a forward to defender, and saw action in 63 total games, starting 28 of them. Her final home game, a 4-0 win over UW-Platteville, propelled her team into the WIAC Tournament and it also saw her parents on the field with her for starting lineups.

“There was this sense of pride on Senior Day because it meant that she had played all four years, and a lot of people don’t get to do that,” Timber said. “All three of us standing there felt good. It was an amazing day.”

Madison is now focused on closing out her final semester strong. In three months, she will be walking across the same stage that her father did nine years prior, this time with her mom snapping pictures from the corner.

For Timber, that day will be just another stamp of love for UWO.

“The past four years have amplified what I knew about UWO. It is one thing when people take care of you—and I had a whole decade of help maneuvering through this place and figuring things out. It is another level when they nurture your child. That is different. That is so important. It just confirmed everything I knew this place was.”