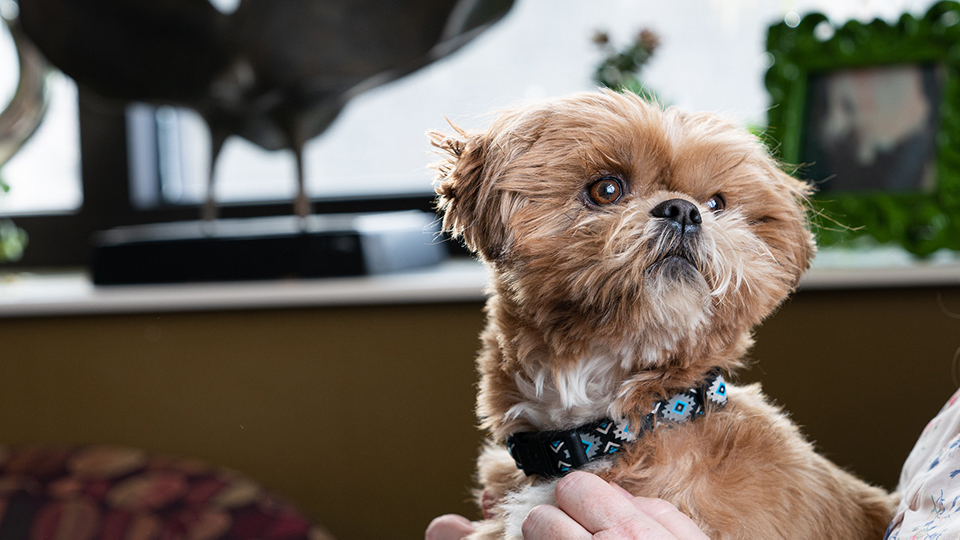 There are plenty of resources on the University of Wisconsin Oshkosh campus to help students flourish.

Good luck finding one as adorable as Leo.

The 4.5-year-old brown Lhasa apso, who weighs about 11 pounds and stands not much taller than a pair of high-top Nikes, is the new on-campus therapy dog at the UW Oshkosh Counseling Center. 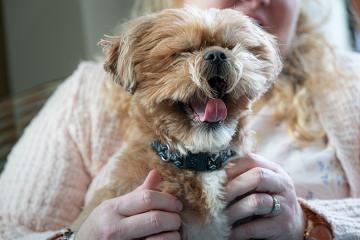 Leo is the new therapy dog at the UWO Counseling Center.

Leo began his tenure in January and now spends several half days a week helping out in the Counseling Center, located on the second floor of the Student Success Center. He’s owned by Counseling Center Director Sandy Cox, so his availability is often dictated by her schedule.

When he’s in, he might be found nuzzling a student during a counseling session, curled up on his bed in Cox’s office or dragging his stuffed toys—Moosey, Piggy or Lamby, perhaps—up and down the office hallways.

“His favorite place to be basically is laying on someone’s chest, getting a good snuggle,” Cox said. “He’s a big snuggler.”

Leo’s duties include taking part in one-on-one and group sessions, helping with walk-ins and generally being an uplifting presence in the office. In the simplest terms, Leo’s job is to help make the Center—and, in a way, the campus as a whole—as supportive an environment as possible.

He’s stepped into a role that had been filled by Annie, the beloved Pekingese who’d been putting people at ease since she and Cox joined the campus community in 2014. Annie died of cancer in August.

Cox said she and her colleagues noticed there was definitely something missing during the span of time after Annie’s passing and before Leo arrived. All is well now, though. 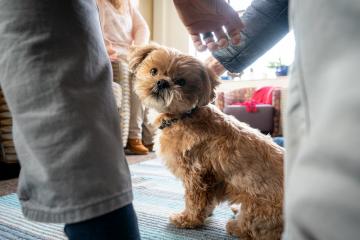 Leo is the new therapy dog at the Counseling Center. He’s in the office most afternoons.

“I can’t tell you how many people stop by the center just to see if they can see Leo because it makes their day,” she said. “That was the same as Annie. We had regulars who would stop in to give her one quick pet or get one quick lick and they were set for the day.”

Leo came from a rescue in southwestern Wisconsin, where he’d been just one night before Cox (and nearly 60 other people) inquired about him. He’d already been trained as both a service and therapy dog and when Cox got him he went through another round of testing to make sure he had the right temperament and behaviors to be a part of the Counseling Center team.

So in other words: Leo’s a good boy—and has credentials to back it up.

“Leo is probably one of the best behaved dogs you’ll ever meet,” Cox said. “He’s incredibly funny. He loves his toys. He has a couple toys at the center and one is called Moosey. The minute he comes in, whether it be in the morning or the afternoon, he’s got a routine where he runs through the office, gets Moosey, and proceeds to go into every single office in the center to say hello and show the moose for the day.”

Leo is UWO’s third therapy dog. Before Annie, there was Sherman, a boxer, who debuted in 2010. Beyond the comfort they provide, the dogs also work like a mascot for the Counseling Center. (Don’t take it personal, Clash.)

Yet another job Leo’s taken on in his short time at UWO: He likes to let his co-workers know when it’s the end of the traditional work day.

“He knows when 4:30 p.m. hits,” Cox said. “I don’t know how he knows it, but he goes out in the hallway and starts throwing his toys for himself. And he’ll run after them and slide into the wall and everybody comes out just to see him and laugh.

“He’s quite the character.”