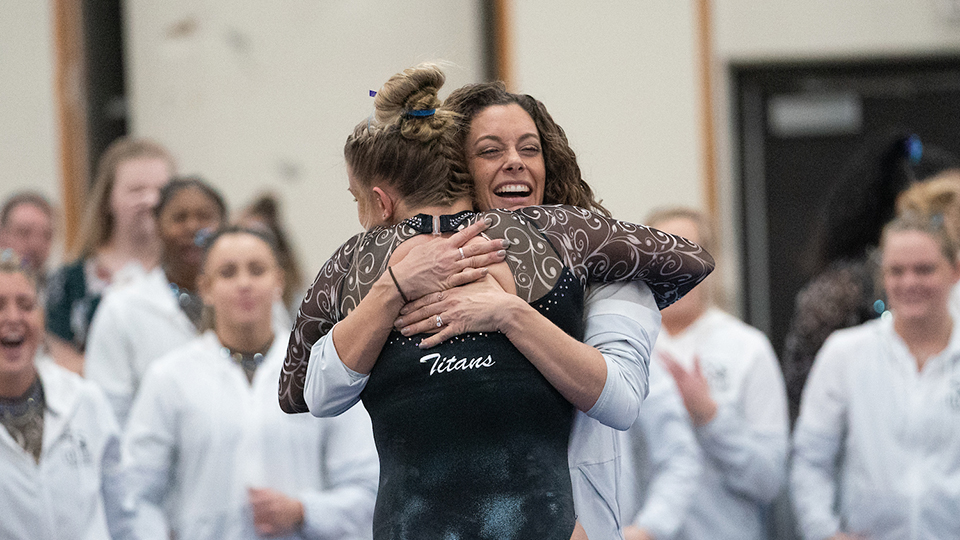 The life-changing moments came one after another for first-year gymnastics standout Trinity Sawyer.

First a devastating injury, then a surprise text message.

It was her junior year of high school and prime time for recruiting. University of Wisconsin Oshkosh gymnastics coach Lauren Karnitz ’06, ’12 MSE, had traveled to Florida to watch the teenager from Alpharetta, Georgia compete. What she witnessed was the rupture of Sawyer’s Achilles tendon, ending—at the very least—her season.

The next day, Sawyer received a surprise direct message on Instagram that not only lifted her spirits, but also proved to be a turning point in her life. It was Karnitz, letting her know all was not lost.

“She said, I just wanted to reach out because I know that you’re probably feeling very defeated right now, but I was looking forward to watching you compete yesterday,” Sawyer remembered. “And then she said, today’s day one on the road to recovery. It’s going to be a long and hard journey. She was just kind of wishing me good luck with my recovery. That was the first I’d ever heard from her.”

The connection between prospect and coach has, over nearly two years, moved from Instagram to Oshkosh and now has Sawyer helping a UWO gymnastics squad charge into Saturday’s Wisconsin Intercollegiate Athletic Conference (WIAC) Championship as the fifth-ranked NCAA Division III team in the country, according to RoadToNationals.com.

With a strong showing this weekend, the Titans will qualify for the National Collegiate Gymnastics Association (NCGA) Championship for the second straight year. After last year’s fourth place finish, the ultimate goal is the program’s first national title since 2007.

Dream finish or not, there’s no denying the impact of Instagram on one of the top teams in D3. 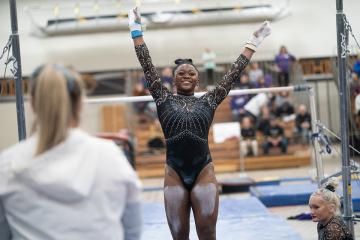 The use of Instagram as a recruiting and communication tool has led to two major developments, Karnitz said.

First, this year’s team features athletes from 14 states. Only one of the 22 on the roster—Rahdea Jarvis, a sophomore from Brookfield—is from Wisconsin. The rest found their way here from not just the Midwest, but also Colorado, Florida, Georgia, North Carolina, Oklahoma, Texas and Virginia.

“Instagram has been huge in helping me reach out farther,” Karnitz said. “It makes the world a lot smaller.”

The second development is more obvious: The team is performing at a very high level. Karnitz said she “100 percent” sees the impact her change in recruiting tactics has had on the top-to-bottom talent on the roster, especially with the last two classes.

Social media has changed the collegiate recruiting game at all levels and across all sports. Coaches, recruits, alumni and highlights are all just a few clicks away. And for Karnitz, the 2019 NCGA Coach of the Year, it’s helped bring together a team that could be on the verge of reaching heights not seen in her previous 12 seasons at the helm.

“I didn’t even know that UW Oshkosh was a school and didn’t know that she was looking for me or wanting to meet me,” said Sawyer, who, with teammate Emily Gilot, has emerged as one of the top vaulters in D3. “It was a great feeling to know that I was wanted by someone.” 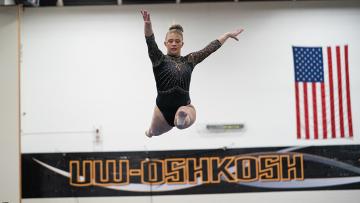 Kaira Hammond was an All-America award winner in the uneven bars last season as a freshman.

Sawyer is one of seven first-year gymnasts from six states to come to Oshkosh this season. As transplants from all over the country, the group has helped the gymnasts come together as both teammates and friends. Of course, each year there’s a fresh wave of newcomers who need to adjust to college life, living in Oshkosh, and in some cases the Midwest.

Kaira Hammond, a sophomore from Thornton, Colorado, was one of eight gymnasts new to the program last season. She, too, wound up on the UWO radar thanks to Instagram and was part of a class that included others from Kansas, Texas and Virginia, among others.

“I think that because we are all from different places we have closer connections,” Hammond said. “I didn’t know anyone when I came here so the team automatically became my family.”

Besides the momentum of the program and all that UWO has to offer educationally, the Titan National Scholar award has been another recruiting tool. The award grants students from outside Wisconsin in-state tuition rates if they qualify academically. That can be a sweetener when trying to lure a young athlete away from another corner of the country, Karnitz said.

Karnitz herself was a member of the Titans’ gymnastics squad not all that long ago, but times were different. In 2003, her first year, there was no Instagram, Twitter or Facebook. Instead, communications took place via DVDs, phone calls and traditional printed letters.

The playing field has changed, but luckily for the UWO program, Karnitz has been able to roll with it. 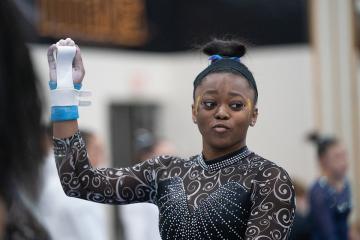 Trinity Sawyer and the UW Oshkosh gymnastics team are headed for Eau Claire this weekend for the WIAC Championship.

“I barely had email,” she said with a laugh, thinking back to her senior year of high school in 2002. “Really, you were just showing up on campus or sending in a video tape.”

Now as she nears the end of her 13th year as coach, she can spot and scout future Titans just about anywhere, anytime.

“I don’t get mail anymore. I don’t get DVDs,” she said. “It can all be done on Instagram.”

Just as coaches like Karnitz are able to browse social media networks to look for future Titans, young athletes are able to do the same thing in reverse—scout the schools they’re interested in attending. That’s why Karnitz has worked hard to keep the @UWOGymnastics Instagram account active in showcasing what the program has to offer. As of early March, the account had the most followers in the athletics department.

That helped people like Hammond keep an eye on what the UWO team was up to while considering her options and, maybe more importantly, get a feel for what life was like as a Titan.

“I got to follow the team’s journey that season and see what being on the team was all about,” Hammond remembered. “It looked like they had a lot of fun in practice, which was something I liked.

“Ultimately I chose UWO because of how close the team was … I wanted to be a part of something that felt like a family.”