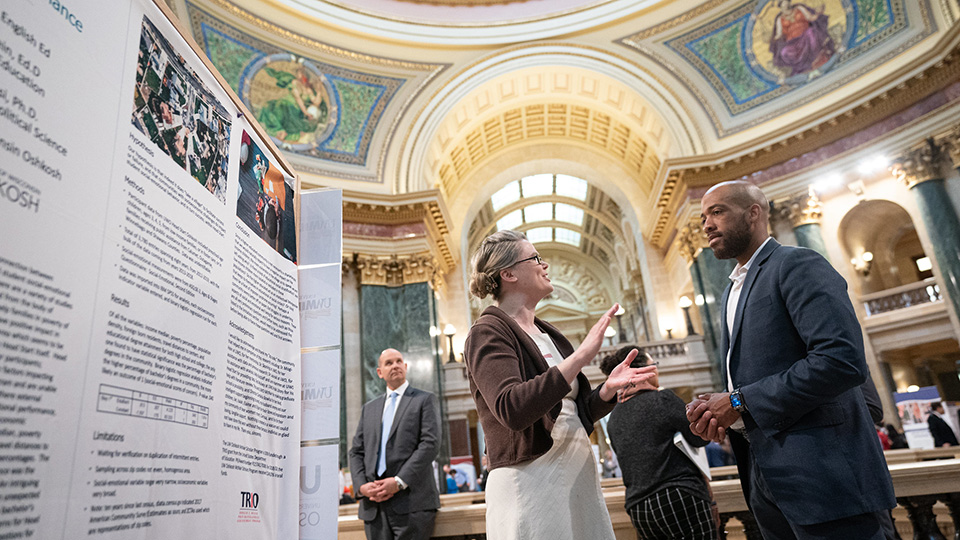 Seven University of Wisconsin Oshkosh students were among more than 125 representatives from across the UW System presenting their research at the 17th annual Research in the Rotunda event Wednesday inside the State Capitol in Madison.

During the four-hour event students showed off their undergraduate research projects with displays and conversations with legislators, faculty, staff and administrators from around the UW System as well as curious members of the public. For many of the students, Research in the Rotunda marks another milestone in the research process on which they closely worked with a UW Oshkosh faculty or staff mentor for months or even years.

The student research projects cover a wide range of topics, including mental and physical health and an array of environmental, political, social and economic issues. 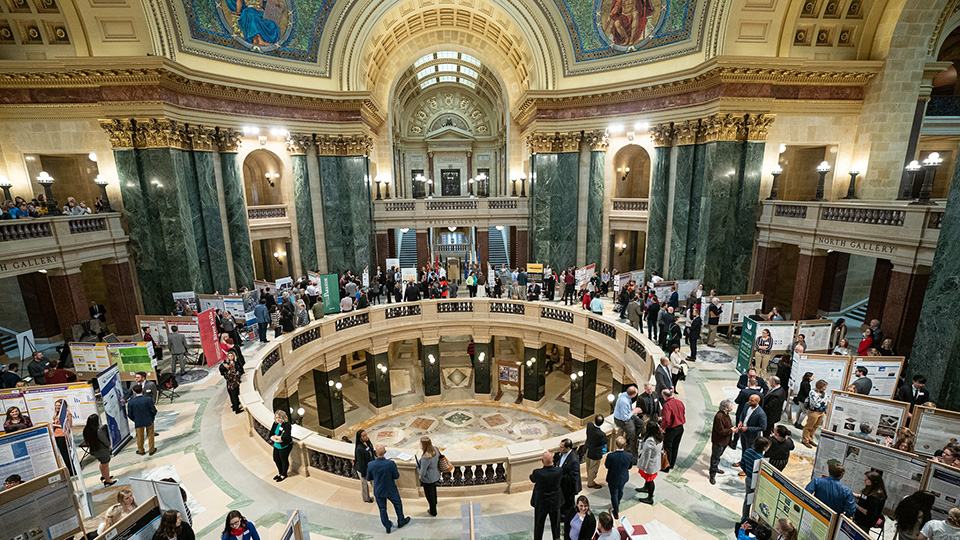 More than 125 students from around the UW System took part in the 17th annual Research in the Rotunda Wednesday in Madison.

Megan Robertson, a recent graduate and Appleton native, spent the day sharing about Influence of the Oneida Government Boarding School on the Oneida People of Wisconsin. She was moved to dig into the history of the boarding school that had a 25-year run on the Oneida reservation a century ago in part because of the lack of history of native peoples education she’d received before college.

State Rep. Dave Murphy (R-Greenville) spent time with Robertson, sharing his personal connection to the Oneida reservation. She also got to discuss her work with UW System Regent Torrey Tiedeman.

Even with heightened concern over the spread of the coronavirus that’s impacting many UW System activities in the weeks ahead, several state officials took time to chat with student presenters. There was no glad-handing—all patrons were asked to avoid handshakes—but those with professional ties to the Capitol were still able to mingle with bright young minds from around the state.

UWO history professor Stephen Kercher, who worked with Robertson on her project, said the event went “exceptionally well” despite the unusual circumstances.

“It’s just rewarding every year to see our students holding their wits together, organizing their thoughts and being able to pull off a description of their work in a very succinct manner,” he said. “For a lot of them it’s the first time they’ve done it.”

Lt. Gov. Mandela Barnes and Rep. Gordon Hintz (D-Oshkosh) also made rotunda rounds. One of Barnes’ stops was to talk with Angel Camacho, a senior economics major from Kenosha, who presented research on the impact of the Cornell note-taking method on student success. (For the uninitiated, the Cornell method is a way of organizing notes that includes summaries and unanswered questions from a lecture or lesson.) 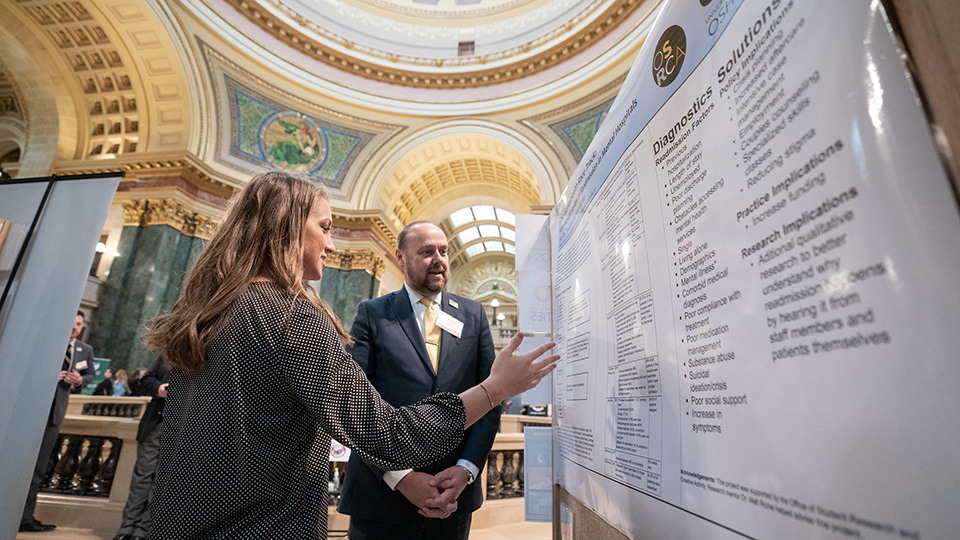 Baylee Tkaczuk, a senior criminal justice major, talks with University of Wisconsin Oshkosh Chancellor Andrew Leavitt during the Research in the Rotunda event. Tkaczuk was one of seven students representing UW Oshkosh at Wednesday’s gathering.

After meeting with Barnes, Camacho said he found it more nerve-racking to present in front of a room full of peers than one of the state’s top officials. Camacho, along with recent graduate Brenna Prieto, senior Megan Elger and junior Stacey Sparks, are part of the Ronald E. McNair Scholars Program. He said Research in the Rotunda was an opportunity to show the state’s investments in higher education pay off.

“It’s important to show that the money that’s being invested into students and to what we want to do is still important,” Camacho said. “It has meaning, it has some impact, and it’s helping us develop and consequently be out in the job market and making a difference.”

UW System President Ray Cross took a break from circulating to address the crowd of several hundred people to stress the significance of student research.

“Today’s event is one of the more public and prominent events we do regarding student research but our commitment runs much deeper,” he said. “We value the strong connection between our universities and our state government and it’s critical in moving our state forward.”

Here is the full rundown of the student-faculty teams who took part in Research in the Rotunda: