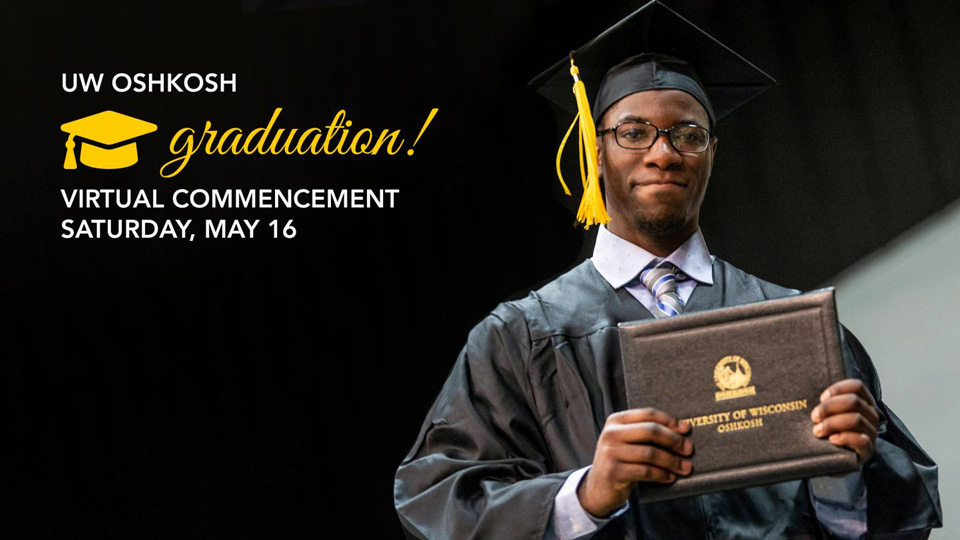 A special virtual spring commencement ceremony will be held at 9:30 a.m. Saturday, May 16 to recognize University of Wisconsin Oshkosh graduates for their academic achievements.

About 1,670 candidates for associate, bachelor’s and graduate degrees will be honored as part of the University’s first-ever online commencement, which will feature formal remarks, student speeches and digital slides of each graduate.

The new grads join the nearly 100,000 UW Oshkosh alumni making a positive impact around the nation and the globe.

“I congratulate all of our spring 2020 graduates,” said UWO Provost John Koker. “While the current pandemic has disrupted the normal course of our semester, it cannot change what our students have accomplished. Finishing their studies under these circumstances gives even more reasons to celebrate.” 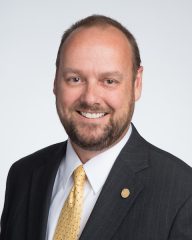 UWO Chancellor Andrew Leavitt said much has been learned in the past few months.

“The pandemic experience has been full of lessons for UWO, for higher education, for the nation and the world. And one moral that COVID-19 has reminded me of is to never underestimate the resilience of Titans,” he said.

“Students, including this spring class of 2020, were dealt an unimaginable hand just two months before commencement. They adapted. They faced the storm head on. Graduates persevered. I encourage everyone to join their families, friends, professors and other supporters as we get ready to celebrate achievements that history won’t soon forget.”

A link to view the virtual ceremony will be shared later this week.

The event will include video messages from Chancellor Leavitt and Provost Koker as well as from faculty and student speakers.

Cole teaches courses in modern and contemporary literature, literary criticism, creative writing and the environmental humanities. His academic research examines representations of animals in modern British and Irish literature from an eco-critical perspective. Born, raised and educated in Canada, he is a proud first-generation college student. In 2016, he was one of the recipients of the Edward M. Penson Award, which recognizes faculty members who make significant contributions to their colleges and the University.

Ransom’s 35-year career spanned finance and advisory services as well as senior leadership roles in private and public companies. He leveraged 10 years with Arthur Andersen and Accenture to earn roles at Everbrite Inc., as executive vice president and later at Menasha Corp. as division chief executive officer. He spent the next 15 years at Bemis, starting as division president and retiring in 2017 as executive officer and president of Bemis North America. He built his career around servant leadership, a strategic agenda and delivering results. Since his “retirement,” Ransom has enjoyed the role of instructor in UWO’s MBA program.

Ally Chard, a human resources and Spanish major, of Madison; and Alexandra Fischer, a communication studies major, of Franklin, will serve as student speakers.

Chard credits the four months she spend abroad in Spain for broadening her friendships and igniting a desire to explore cultures beyond the U.S. Outside the classroom, she served as treasurer for the UWO chapter of Society of Human Resources Management and worked as a Titan Gold Corps campus ambassador, giving tours to prospective students and their families.