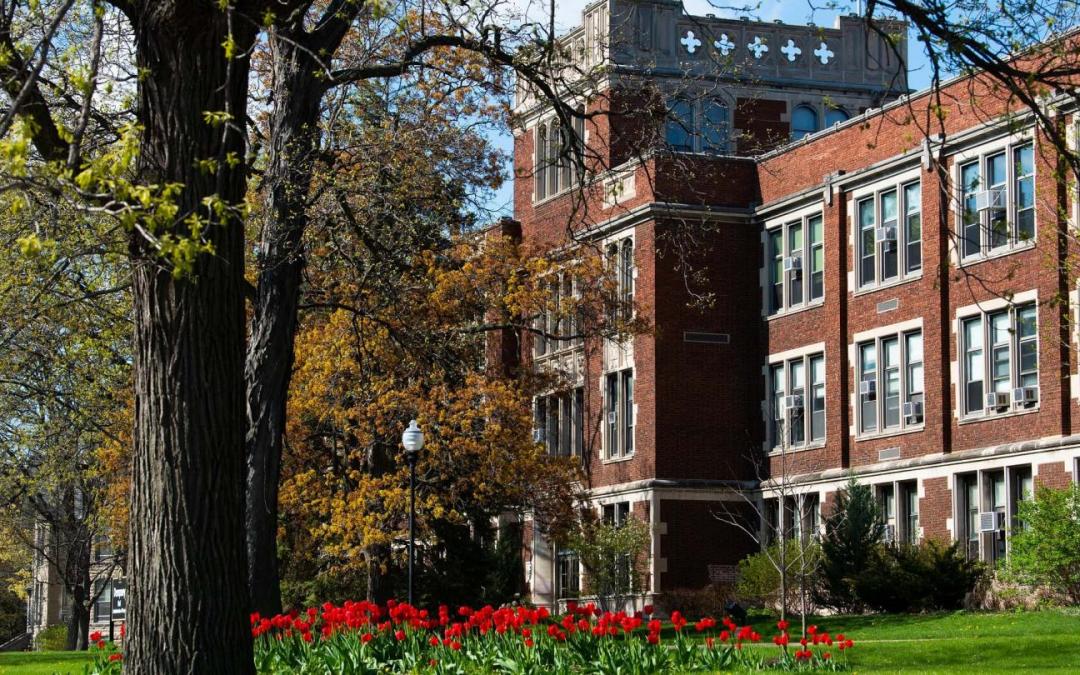 Seventeen University of Wisconsin Oshkosh seniors who exemplify high academic and leadership qualities and a deep commitment to serving others have been honored with a 2020 Chancellor’s Award for Excellence.

Those recognized for their academic performance, University-related service and community involvement include:

Alissa Arneson, of Oshkosh, is majoring in nursing with the goal of working as a medical/surgical nurse in the Fox Valley upon graduation next fall. She appreciates the daily opportunity for learning and growth that comes with the nursing profession. Her long-term career goal is to become a family nurse practitioner and a nursing professor. She is a Kennedy Nursing Fellow and a member of the Honors College. She works as a supplemental instruction leader for Biology 212, a human physiology class. She also serves as the social chair for the Oshkosh Student Nurses Association.

Jacob Banfield, of Hazel Green, graduates this spring with a major in political science. He has been active in the Oshkosh Student Association (OSA), currently serving as president. He helped develop a new safe ride program on campus called UWO GO, which is used by 60 to 70 students per day. As a member of ROTC, he volunteered for events such as the Ranger Challenge and Northern Warfare. Following graduation, he will serve eight years in active duty with military intelligence in the U.S. Army. Long-term goals include working in politics or attending law school.

Aaron Beiser, of Neenah, will graduate next fall with a major in nursing and a minor in public administration. He is a first-generation college student who plans to pursue a career in acute care nursing and further graduate studies. He has been involved in OSA and Greek life on campus. Through Beta Theta Pi and Hands on Oshkosh, he has put in many hours of volunteer service. He also has joined the Marines and hopes to travel the world.

Tianna Borchardt, of Wausau, graduates this spring with a major in elementary education and a minor in math. She took part in a study-abroad trip to Albania and Greece for her math minor. Her Honors College capstone thesis focused on how the No Child Left Behind Act transformed schools. She set a goal to graduate debt-free by financing her education through a number of jobs, including coaching and refereeing basketball and working as a paraprofessional educator and a UWO tutor. She plans to pursue a teaching career, earn a master’s degree in educational leadership and work toward becoming an elementary school principal.

Zackary DeBroux, of Columbus, graduates this spring with a major in communication studies. He plans to earn a master’s degree and pursue a career in student affairs administration. He has served as president of Party.0, an organization that hosts sober parties for fellow college students; and as assembly speaker for OSA. He also is a founder and president of the fraternity Phi Gamma Delta-Delta Colony. He has served for three years as a community adviser, planning monthly programs. Through his many leadership positions, he has developed his event planning skills and learned how to collaborate with people from diverse backgrounds.

Sydney Devitt, of Crystal Lake, Illinois, is majoring in international studies and political science with minor in history. She wants to better understand humankind and build a world of inclusivity. She has learned leadership, team work and global citizenry through her involvement in Model United Nations, where she served as the youngest board member and youngest committee head. She has been a Global Buddy, helping foreign exchange students adjust to campus life. In addition, has been involved with OSA, serving as speaker pro-tempore and as the executive board representative to the Diversity and Inclusivity Action Committee.

Maya Gengler, of Theresa, graduates this spring with a major in nursing and a minor in business administration. She has served as president and vice president of the Oshkosh Student Nurses’ Association, secretary of the National Residence Hall Honorary, the volunteer coordinator for Hands on Oshkosh and the community adviser liaison for Taylor Hall Government. At the state level, she served as the Breakthrough to Nursing chair and legislative vice president for the Wisconsin Student Nurses’ Association. She recently took part in a study-abroad clinical in Buenos Aires, Argentina. She plans to pursue a career as a labor and delivery nurse in the Fox Valley and continue her education with graduate study.

Morgan Hach, of Highland, graduates this spring with a major in English secondary education and minors in math and Spanish. She served as a University Studies Program peer mentor. Spurred by an interest in diverse cultures, she founded the Global Scholar Student Club and served as president for two years. She also worked in the Admissions Office as a Titan Pride Ambassador to help other first-generation college students like herself. As a supplemental instruction leader, she worked as a tutor for Spanish and 100- and 200-level math courses. With an Undergraduate Student/Faculty Collaborative Research grant, Hach studied children’s and young adult literature about activist athletes. Her Honors College capstone project resulted in a 16-page analysis of animal references in William Shakespeare’s Macbeth.

Sydney Huff, of Brillion, graduates this spring with a major in elementary education and a minor in social studies. Her goal in becoming a teacher is to help students who face challenges both in and beyond the classroom. After transferring to UWO, she became involved in Big Brothers Big Sisters. She also is involved in Aspiring Educators of Wisconsin, currently serving as president of the UWO chapter and on the state executive board. This year, she planned the organization’s statewide Social Justice Conference and learned about the importance of inclusive classrooms.

Drew Krepline, of Kaukauna, graduates this spring with majors in finance and economics and a business analytics certificate. He plans to start his career in buy-side fundamental equity research with an asset management firm. Long-term, he would like to pursue charter financial analyst designations and graduate studies. He has served as president of Donner/Webster Hall Government and two years as a community adviser. Last spring, he was inducted into Beta Gamma Sigma, a business honor society. He has served as president of the Finance Club and as a senator and chief of staff of the OSA. One of his best memories is taking part in the Student-Managed Endowment Fund, currently serving as a portfolio manager.

Dulce Lopez, of Wonder Lake, Illinois, graduates this spring with a major in human services leadership and a minor in Spanish. The first-generation college student said the Midwest Student Exchange Program served as a beacon of hope to achieving her higher education goals. She was a member of the National Honor Society of Leadership and Success and of the multicultural mural task force. She served as vice president of Tau Upsilon Alpha Honor Society, vice president of the Human Services Leadership Student Organization and treasurer of the Student Organization of Latinos.

Jessica Martinez, of Waukesha, will graduate in the fall with a major in secondary education with minors in Spanish bilingual education and English as a second language. As a first-generation college student, she helped others in similar circumstances by promoting academic and social support in roles as learning group leader and peer mentor in Student Support Services. She also was involved in the Student Organization of Latinos and the Multicultural Education Coalition and the gospel choir. She took part in a study-abroad trip to Honduras, Nicaragua and an arts integration internship with the Winnebago Literacy Council. She plans to pursue a career in teaching and further graduate studies.

Braini McKenzie, of Oshkosh, graduates this spring with a major in elementary education and minors in math and psychology. She has grown as a leader by serving as a Titan Advantage peer mentor, National Society of Leadership and Success president, Student Support Services learning group leader, OSA senator and Titan captain orientation leader. She developed and implemented the Titan Femtorship Program for women-identified undergraduate and graduate students interested in higher education careers. As a McNair Scholar and Honors thesis researcher, she studied “Leadership Development Experiences of Women of Color at Predominately White Institutions. She plans to pursue a career as a student affairs professional and earn a master’s degree in education.

Bryn Portelli, of Neenah, graduates this spring with a major in nursing. At UWO, she has learned to advocate for herself and her patients. She mentored fellow classmates and served as a student nurse intern for the Board of Directors of Eta Phi and as a student nurse ambassador. She is a nurse intern on the labor and delivery floor at St. Elizabeth Hospital and aspires to be a labor and delivery nurse.

Sierra Skindzelewski, of Waupun, graduates this spring with a major in anthropology. She joined the sorority community in fall 2015 and plans to pursue a career advancing fraternity and sorority life. In 2018-2019, she served as president of the Panhellenic Council. She received the Wilford A. Butler Change Maker Award for her work accelerating progress in the fraternity/sorority experience. In addition, she received the 2019 Outstanding Sorority Senior award and placed first in the Order of Omega National Honor Society Case Study.

Luiz Gustavo Caputo Spim, of Sorocaba, Brazil, graduates this spring with majors in finance and management and plans to pursue a career in corporate finance and further graduate studies. He has served as secretary and president of the International Business Club and a member of the Student Advisory Council for the College of Business. He was a member of Model United Nation, earning an outstanding delegate award. He was a manager for approximately $850,000 distributed in seven equity portfolios of the Student-Managed Endowment Fund. He earned a lifetime membership to Beta Gamma Sigma and a certificate of excellence in Spanish.

Malissa Spim, of Mount Calvary, will graduate in the fall with a nursing degree. As a first-generation college student, she worked a number of jobs at home and on campus to support her education, including serving as a tutor for science classes and as a certified nursing assistant at the Student Health Center and at Agnesian Healthcare. She was involved with Men in Nursing and the Oshkosh Student Nurses Association, including serving as president. She also was executive vice president of the Wisconsin Student Nurses Association, where she helped organize fundraising events and the annual conference. She plans to pursue a career in critical care nursing and further graduate studies.