As Pride Month continues, the LGBTQ+ Resource Center director talks how to best be an ally 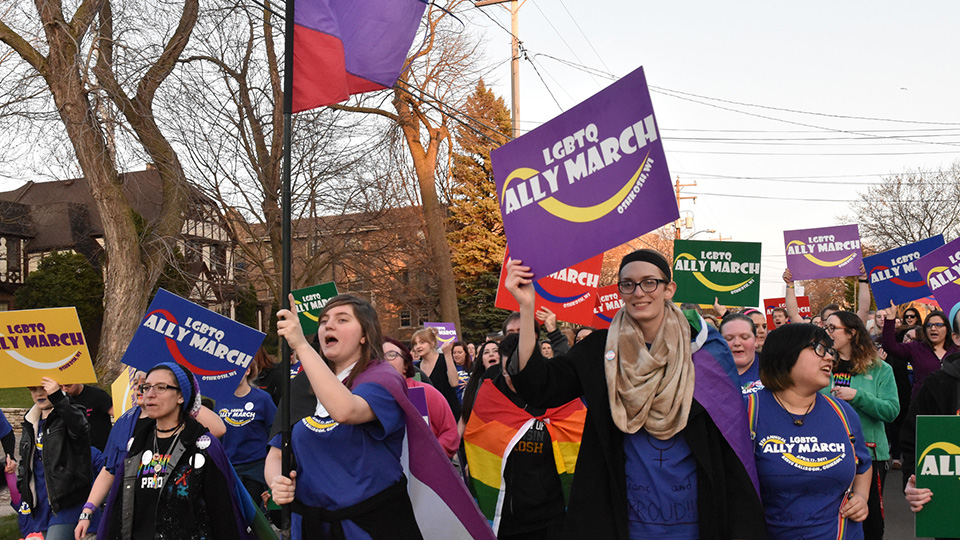 The month of June is designated as Lesbian, Gay, Bisexual, Transgender and Queer (LGBTQ) Pride Month. And this is nothing short of a milestone: It’s the 50th anniversary of the first-ever Pride March in New York City—held the year after the Stonewall riots.

While there’s a lot happening in the world, from a global pandemic to worldwide protests against racial injustice, it’s important to stand with and celebrate the LGBTQIA+ community this and every month.

With all that’s going on, including Pride Month, we thought it would be an opportune time to check in with Liz Cannon, director of the University of Wisconsin Oshkosh LGBTQ+ Resource Center since 2008.  On campus since 1997 and now a senior women’s and gender studies lecturer, we talked about how a campus newcomer can work to be a better ally and how current events have impacted LGBTQIA+ people.

For people new to campus in the fall interested in becoming an ally for the LGBTQ+ community, what’s a good first step?

A good first step for new students wanting to ally with the LGBTQ+ community is to get involved in spaces where you will meet LGBTQIA+ students. Rainbow Alliance for HOPE is our student organization that focuses on education and advocacy, as well as forming community and having a good time. For example, it’s the place to learn more about how to use pronouns or do a deeper dive into asexual and aromantic positivity while planning a poster campaign on campus to promote queer and trans visibility. The president of Rainbow Alliance for HOPE reminded me to say not to be afraid to ask questions and take the time to educate yourself.

Q+ Unity is our more social student group. An exec board member of Q+ reminded me that “we are all about building community, and that includes those who reach out to build community with us. We stand against systemic oppression faced by others.” Both groups support all who face social justice issues. Or come to the LGBTQ+ Resource Center’s annual kickoff event—which might well be happening virtually this year—to learn what we are all about. The Women’s Center also has a weekly program called Level Up!, a Feminist Gaming Initiative, which is another good place to meet LGBTQIA+ students. Showing up to LGBTQIA+ programs and events—whether put on by the LGBTQ+ Resource Center, HOPE, Q+ Unity, the Women’s Center or the Reeve Union Diversity and Inclusion Program—is a good way to increase your education about the community but also to show those in the community that these are issues you care about and will come out for. We also look forward to seeing you at the annual LGBTQ+ Ally March on April 14, 2021.

What are some next steps that can be taken?

A second step is to go through the SAFE ally training offered by the LGBTQ+ Resource Center. Not only will you learn more about the community you want to ally with, but you also will get a SAFE triangle you can put on your laptop or res hall door to let others know you are a supportive person to connect with. 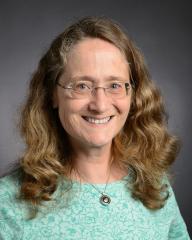 Finally, remember that as someone not in the community, you can speak up when those of us in the community may not feel safe doing so. Think of this fact especially in your classes. Be the one who brings LGBTQIA+ issues into the conversation. Be the one who introduces yourself with your pronouns on the first day of class to help normalize this practice. Be the one who tells a fellow classmate it’s not cool to not be supportive of LGBTQIA+ people.

Is there anything the LGBTQ+ Resource Center offers for the UWO community that might surprise people? Something not widely known?

I think a lot of people don’t know we have a robust internship program. A former program assistant has called our interns our ambassadors, and we have had amazing students, both LGBTQIA+ and allies, who become the heart and soul of the center. They are the reason our center is painted bright colors. They are the reason we participate in the Homecoming decoration contest. They are the reason we raise almost $1,000 each year in a friendly vicious All-Department Penny War before our LGBTQ+ Ally March. This internship is a semester-long, three-credit class, which can be taken through women’s and gender studies or social justice programs or as a site for the internship programs offered by the Career and Professional Development office or the human services and leadership or social work academic programs.

Since a lot of us are still spending more time at home than usual because of the pandemic, do you have any reading or viewing suggestions for people looking to be a better ally?

“How to Be an LGBTQ Ally” is a quick checklist to see if you have the basics down. However, I find one of the best ways to improve your ability to better ally with a community is to learn as much as you can about that community. I teach a course called Queer Memoirs for the 15-credit LGBTQ Studies Certificate Program we have on campus, and one of my students’ favorites is Daisy Hernandez’s A Cup of Water Under My Bed: A Memoir. The Women’s Center and the LGBTQ+ Resource Center are doing a book group this summer, and I am really enjoying Samra Habib’s We Have Always Been Here: A Queer Muslim Memoir.

Some of the classic must-reads are Audre Lorde’s Zami: A New Spelling of My Name, Leslie Feinberg’s Stone Butch Blues, James Baldwin’s Giovanni’s Room and Jeanette Winterson’s Oranges Are Not the Only Fruit. I just found a new one on Audible that I’m going to listen to next: Brandon Taylor’s Real Life: A Novel.

If you’d rather watch something, check out the documentary Before Stonewall if you are a history buff, or Southern Comfort, a documentary of a trans man who, in a time without trans healthcare, is dying of ovarian cancer; other favorites are Pride, Love Simon, But I’m a Cheerleader and Pariah. Great TV shows are Sense 8 if you are into sci-fi or The Fosters if you are into family dramas. My colleagues tell me Star, Pose and Stumptown are also good.

Speaking of the pandemic, are there any issues specific to the LGBTQ+ people that have been on your mind these past few months? Something many people might not be aware of?

The number one concern I have for LGBTQIA+ students, including K-12 students as well as college students, is the reality that during the previous stay-at-home order or now in the still safer-at-home summer where K-12 schools are not in session and the University is still not open, students may be staying with families that are not supportive of their identity. For many first-year LGBTQIA+ students coming to Oshkosh last fall was the first time they could truly be themselves. For many still in public schools (if they are in a school that is supportive of them and not one where they are experiencing bullying from classmates and/or nonacceptance from teachers), school may be the one place they can let their guard down and, if transgender and/or nonbinary, possibly try a name and/or set of pronouns that fit their gender. For those college students who do not have a family of origin home to stay in or be safer in, I have worried about where they have found a place to shelter. If they are staying in their rented apartments in Oshkosh, were they able to find a job to pay the rent? The University has offered relief programs for students such as Titan Rise, and I know students whom it has helped. But it doesn’t solve all economic concerns.

From a wider perspective, concerns I have for the LGBTQIA+ community is that while we are a community of great resilience, we are also a community where challenges of nonacceptance increase the numbers of us suffering from mental illnesses, such as depression and anxiety. Isolation does not help. Online learning, where success is so tied to the ability to self-motivate and to set one’s own routine, does not help. Looking past our University students to the larger queer and trans community, I worry about how the pandemic has affected a community where, for many—especially trans people of color, neither job security nor healthcare are a given. To learn more, please see Human Rights Campaign’s report The Lives and Livelihoods of Many in the LGBTQ Community are at Risk Amidst COVID-19 Crisis.

When a movement like Black Lives Matter gains momentum like we’re seeing right now, with masses marching and demanding changes, does that also provide a boost for other movements supporting the recognition, rights and respect of marginalized groups? Is there any relationship there?

There has been in the past. We just need to look to the synergism of the Civil Rights Movement, the Gay Liberation Movement, the Feminist Movement and the Anti-Vietnam Movement for an example. I think what people forget, however, is that the Black Lives Matter movement is also an LGBTQIA+ movement. People forget about intersectionality. So many of those in the LGBTQIA+ community who are suffering the most are black. To demand change in the queer and trans community is to first and foremost demand change for black and brown queer and trans people.

So June is Pride Month. Some wonder if it is OK to switch the focus from Black Lives Matter to Pride this June. We must do both. June was designated Pride Month after the Stonewall riots on June 28–July 3, 1969, when queer and trans people stood up to the police when they once again raided the Stonewall Inn, a bar in Greenwich Village in New York City. Pride is a time where we celebrate the resilience of those who are in the LGBTQIA+ community. In June 2020, it’s a time to be proud of all of us, and a time for all of us to speak up. But we also remember those who led the Stonewall riots, Marsha P. Johnson and Sylvia Rivera who, because they were transgender and were African American and Latina, for many years were not given credit for their leadership, especially by the white gay men and lesbians who started the subsequent Gay Liberation Movement. So June 2020 is a time to especially lift up the voices of those who are being the most targeted in our community today: primarily black, also brown, and some white trans people.

Many outside of our community don’t know the name of Tony McDade, a black trans man who was shot and killed by a police officer in Tallahassee, Florida, on May 27, 2020. Many don’t know that already in 2020, according to the Human Rights Campaign, McDade is the 12th transgender or non-conforming person to be fatally shot or killed in 2020 alone, nine of whom were women, five of whom were black and three of whom were Latina. And those numbers don’t include the two black trans women who were murdered just this past week. We need to know and to remember, so we can come together as a community to proudly state that black and brown queer and trans lives matter while simultaneously standing in solidarity against the killing of black and brown heterosexual cisgender people.